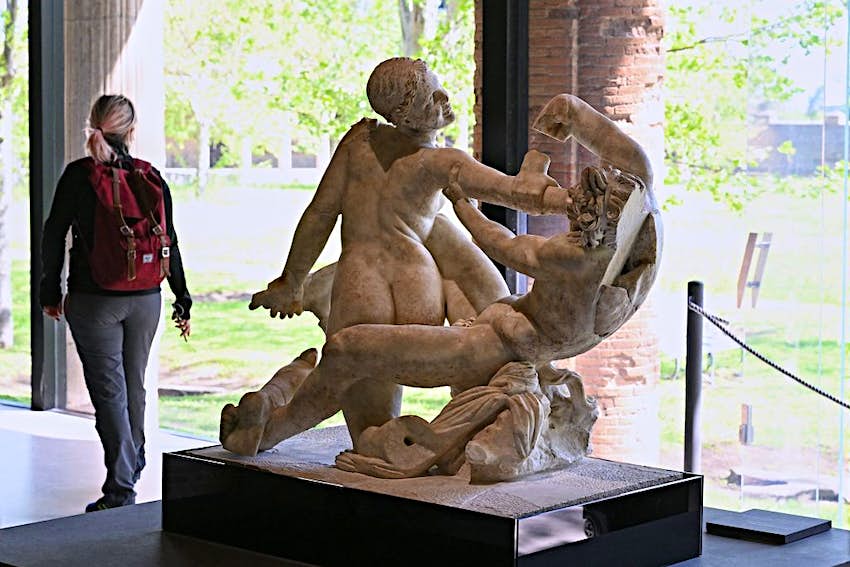 It’s possibly the hottest thing to hit Pompeii since the eruption of Mt Vesuvius covered the city in flaming ash and lapilli (burning fragments of pumice stone) back in AD 79. A new exhibition, entitled ‘Art and Sensuality in the Houses of Pompeii’, comprises of 70 provocative paintings, sculptures, and other decorative erotica found at the vast 66-hectare archaeological site, on show together for the first time.

Running until January 2023, the exhibition includes racy treasures such as paintings taken from Pompeii’s lupanar (brothel), which depict the sexual acts customers were able to pick from. There is also a restored bedroom ceiling fresco of a naked Leda, the Queen of Sparta, with a swan upon her lap, depicting the god Zeus.

Now anyone with tickets for the exhibition can’t help but stare at the huge sculptured penis of the god Priape, found on a statue-fountain at the exhibition entrance. The artwork wasn’t made for tittering or titillation – that'll be your modern mind, according to the Director of the Archaeological Park of Pompeii, Gabriel Zuchtriegel – instead, it was a Roman symbol of fertility and would have been commonly found in atriums (private courtyards).

“In these times of pandemic emergency and war, this exhibition seeks to be an ode to the resilience of beauty,” Zuchtriegel said at the launch of the show, “but from a historical perspective, which helps us to understand that even in the past, art and the imagination were interwoven with social, cultural and political relationships and hierarchies.”

So what other historical perspective is set to get visitors hot under the collar? Amongst the more interesting ephemera are two medallions found on a four-wheeled Roman chariot used by prominent religious women, which was found on site last year. Both are decorated by cavorting satyrs and nymphs and are joined by a wooden chest that is embellished erotically in bronze.

Read more: Inside Pompeii's House of Lovers as it reopens to the public after 40 years

Visitors will also find an ephebe (male adolescent) lampadophore (‘He who bears the lamp’) candleholder which would have been on display in the triclinium (formal dining room). The sculptured lamp would have provided a sly wink to Greek homoeroticism.

But with so many phalluses and fanciful sexual imagery on display, won’t someone think of the children? Well, the team has.

"The theme may seem difficult, but it is omnipresent in Pompeii, so it must be explained to children in one way or another,” says Zuchtriegel. Indeed, a kids' guide entitled The Centaurs of Pompeii aims to explain the subject by following a centaur called Mares as he tries to find a partner. The book then traces a number of central figures found in ancient mythology, including Ariadne, Dionysus, and Narcissus.

Entry to ‘Art and Sensuality in the Houses of Pompeii’ is included in the admission fee. Prices start from €16 ($US17) per adult.

You might also like:
One of the oldest frescoes in Pompeii has undergone a dramatic restoration
Street food stall discovered in Pompeii reveals dining habits of Ancient Romans
Curious tales of why tourists have been returning “cursed” items to Pompeii