Mulling over Morocco? 6 questions to ask before visiting in 2022 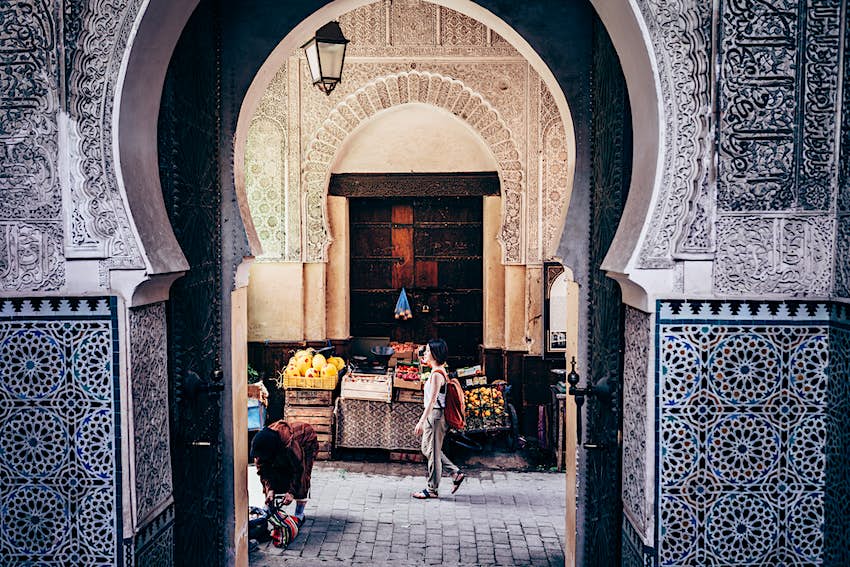 Headed to Morocco soon? Here are some top tips from a Morocco local to help you travel smart © Oscar Wong / Getty Images

You can see the sense of relief on the faces of shopkeepers and restaurant and hotel staff as they welcome you in. Borders are open, restrictions mostly lifted and Morocco's impressive cities, magnificent mountains and expansive beaches are welcoming visitors once again.

In 2018, almost 10 million people visited Morocco, but the pandemic put a wrench in the works for tourism, and less than half as many visited in 2019. While levels have still to catch up with pre-pandemic times, the Minister of Tourism, Fatim-Zahra Ammor, reports that 3.4 million tourists arrived in the first half of 2022. She's hoping to push that to 8 million in total in 2022 and a whopping 10.5 million next year.

Tourism is one of the key industries driving economic growth in Morocco, so it's no wonder that there's that palpable sense of relief now that tourists are coming back. Numbers are still low, but hopes are high.

So if you're one of the tourists planning to visit Morocco soon, what do you need to know before you go?

What are the requirements for entry?

Morocco has declared an end to the latest wave of the Omicron variant and cases of COVID have dropped substantially to single-digit figures of positive cases. That's not to say it's over, though, and there are still requirements, such as wearing a mask on public transport and when you enter a hotel or restaurant.

To enter the country, you’ll need to download and complete the new, streamlined health form that is also handed out on flights and at airports. It takes account of Monkeypox as well as COVID, but only one case of the former has been recorded so far in Morocco.

You'll also need a vaccination certificate or proof of a negative PCR test taken within 72 hours of departure. Children under 12 are exempt from these rules.

16 essential places to visit in Morocco

While air traffic controllers were poised to strike in August, they have been persuaded to stay in their posts after recent successful negotiations. As far as luggage is concerned, there is none of the upheaval being experienced in European airports. But keep an eye on the airport authority's ONDA Twitter account (only in French) as they are reporting issues such as flight delays caused by blockages on incoming flights from Europe.

Are there any disruptions to be aware of?

Protests: Occasionally there are protests outside government buildings on Avenue Mohammed V in Rabat, and in Casablanca. There'll likely be a protest about the rising cost of living in the coming weeks. Protests are generally peaceful but if you don't want to get swept up in crowds of people, follow advice from your embassy and avoid the areas on protest days.

Wildfires: Just like in other areas of the Mediterranean, wildfires have broken out along the coast of Morocco and destroyed acres of forest in the Rif Mountains, specifically the Bouhachem National Park around the tourist-friendly towns of Larache, Chefchaouen and Tetouan. Talassemtane National Park has also been affected, particularly the area of the park near Akchour. The areas affected are all popular hiking routes so if you're heading out, be sure to seek the advice of a knowledgeable guide.

Drought: Morocco has been in a severe drought for some years. If you're going to the Sahara, try to choose eco-sensitive camps re-use their grey water, or have a sustainable water filtration systems and don't dump waste in dry riverbeds. In the cities, you can be supportive of the environment by taking quick showers instead of bathing, and choosing a hotel or riad sporting La Clef Verte logo. These establishments promote sensible use of natural resources as well as good working conditions for staff.

The best time to go to Morocco, depending on what you want to see and where you want to go

Closed for renovations now is the Batha Museum in Fez but a sparkly new version is due to open its doors again in January 2023, located as before in the old summer palace of the sultan with its lovely garden. The Heri Es-Souani granaries in Meknes are also being restored and are scheduled to reopen sometime in 2023 (insha'Allah). And slated to open in September this year is the spectacular, Zaha Hadid-designed Grand Theatre in Rabat.

The award-winning Yves Saint Laurent Museum Marrakech reopens on September 17 after the summer break with a new temporary exhibition that will feature paintings of Morocco by French artist Théophile-Jean Delaye.

At the Majorelle Garden, gates open earlier than usual at 8am so you can beat the heat and the crowds. You can book online for easy access, too. In the garden, the Pierre Bergé Museum of Berber Art has just reopened after a period of renovation.

Why you should embrace Berber culture on your Moroccan adventure

Is anything exciting planned for the rest of 2022?

After a couple of years of no festivals, Morocco is ready to throw a party for the rest of 2022, and in 2023 everything is expected to be back to normal.

September: Dance your way to the Into the Wild boutique festival on September 23 and 24 in Dakhla. The festival is an offshoot of the Oasis Festival in Marrakesh and features electronic, house and techno music, and wellness activities like yoga on the beach.

Where to find five of Morocco’s best music festivals

October: On another spiritual level, the Fes Festival of Sufi Culture will take place in Fez from October 22-29. With a theme of Science and Conscience, there will be masterclasses and debates around Sufism, the esoteric branch of Islam, all in French. Perhaps more accessible, though, are the international music performances. You can enjoy Indian dance and Qawwali music, songs from Azerbaijan and performances by Sufi brotherhoods from Morocco and Kosovo. There's also Christian chant from Brittany in France, Sufi chants and the mesmeric whirling dervishes from Konya in Turkey.

November: The Marrakech International Film Festival is scheduled for November 11-19. Keep an eye on the website to see what movies will be screened and who will be on the jury. Some movies are shown on a screen in Djemaa El Fna Square that are free for everyone.

What useful apps should I download before my trip?

If you plan to travel across Morocco, you should download the app for the ONCF train company and its Supratours buses that serve towns with no railway. The other top bus company, CTM, has a website showing their daily schedules. An important thing to note is that you can't book busses or trains online with a foreign bank card. But booking in advance, especially for busy destinations like Chefchaouen, is pretty much essential these days. The solution is to book through Marrakech Tickets who will send you your tickets electronically (or even deliver them to your riad if you're staying in Marrakesh) for a small fee, some of which goes towards supporting local vulnerable children.

While many Moroccans speak English, the local language is Darija (Moroccan Arabic), with some French thrown in (and Spanish in the north). If you want to impress the locals, Darija Direct is an app that will help you get to grips with the Darija language.