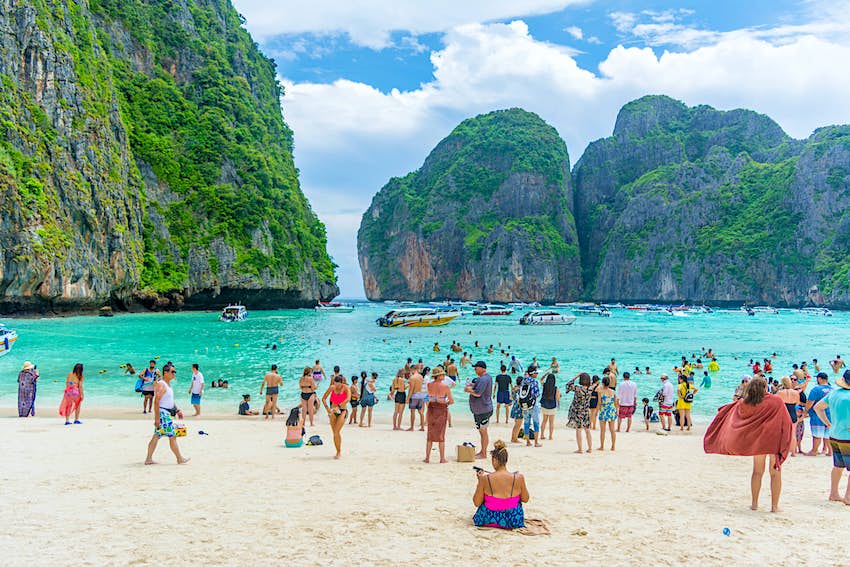 Thailand's iconic Maya Bay (made famous by the Leonardo DiCaprio movie The Beach) has finally reopened to visitors after four years of closure, and is making strides towards its sustainability goals with new visitor rules.

With its dramatic karst cliffs, fine white sand and coin-shaped, turquoise-hued bay, Maya Bay, part of the Hat Noppharat Tara – Mu Ko Phi Phi National Park, meets even Hollywood’s standards for a tropical paradise. If you’ve been to Thailand, it’s likely you visited it yourself; at its peak of popularity in 2018, it’s estimated that as many as 6000 people were rolling into Maya Bay every day.

Yet at only 15 meters-wide and 250 meters-long, the relatively small bay had become a victim of its own popularity. Visitors left behind rubbish, damaged plants and sand and spooked animals, and boat anchors are thought to have destroyed as much as 50% of Maya Bay’s coral. Images of thousands of tourists thronging what was ostensibly a protected natural area led to outrage among Thai citizens, and in 2018, park officials abruptly closed the bay.

Initially, the closure was meant to last four months. But realizing that it would take much longer than this for the bay’s nature to come back, as well as to install the infrastructure required to protect it, officials gradually extended the freeze to four years, finally reopening it on January 1, two months after Thailand began welcoming vaccinated tourists.

"Maya Bay has been continuously receiving interest from tourists around the world. But this has also caused (the natural area) to deteriorate, especially the corals," said Natural Resources and Environment Minister Varawut Silpa-Archa in the statement per CNN. "After shutting down Maya Bay to revive and restore it, up until the present, it has returned to a good condition."

After the entrance to Maya Bay was barricaded in 2018, it was thoroughly cleaned of rubbish; and trees, plants and coral were planted. Next, work began on installing an entirely new tourism infrastructure in and around the bay. A boardwalk, an effort to limit damage to sand and plants, was constructed, and future visitors will reach Maya Bay via a floating dock located behind the karst cliffs, meaning that boats will no longer be allowed to anchor in the bay itself. There will also be a designated area in the bay for swimming.

And perhaps most importantly, the park has decided to cap the number of visitors to Maya Bay. Vorapot Lomlim, head of Hat Noppharat Tara – Mu Ko Phi Phi National Park, told Lonely Planet that visitors will be limited to 300 people in one of seven or eight shifts per day between 10am and 4pm—in effect limiting the total of daily visitors to 3000 people.

The freeze has appeared to benefit the natural environment of Maya Bay. Last year, the national park posted photos and a video of the bay on its Facebook page. The images, which showed a seemingly pristine, untouched, people-free bay couldn't have been more of a contrast with those from only a couple years previously, and made a splash on Thai social media. Additionally, animals have returned to Maya Bay. An underwater camera installed in the bay has allowed scientists to count as many as 100 black-tipped sharks; in 2018, there were thought to be only six.

You might also like:
Full Moon Party or peaceful paradise? Thailand has a beach for you
Jungle safaris, kayaking and bird-spotting at Thailand's top national parks