16 unique things to do in Hanoi 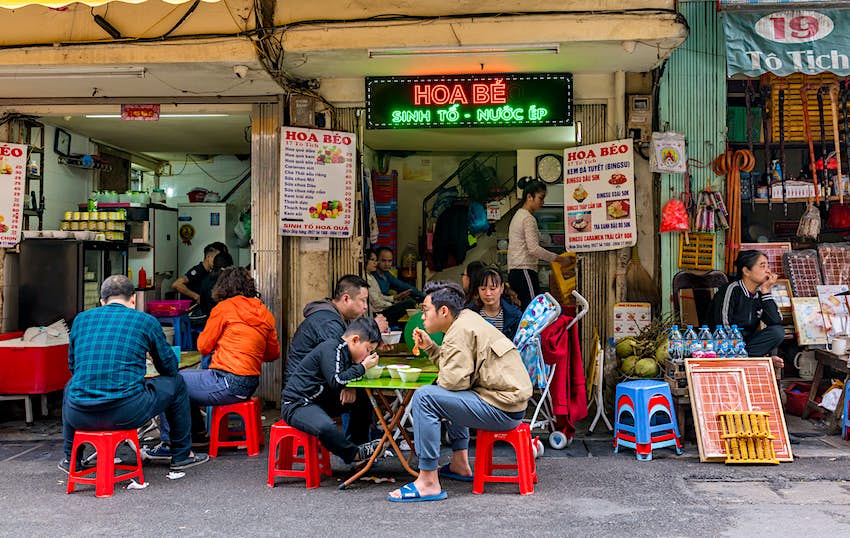 From street food to the respite of Hoan Kiem Lake, here are the best things to do in Hanoi © Daniel William / Shutterstock

Visiting Hanoi is like hopping through a time tunnel: beyond congested roads flanked by modern skyscrapers, ancient temples and multi-storey pagodas rub elbows with French colonial mansions in the labyrinthine Old Quarter.

Both stubbornly traditional and forward-looking, bustling Hanoi largely resisted the light-speed advancements that are sweeping across the rest of the nation, and the city often confounds first-time visitors. This list of the top things to do in Hanoi can help you hit the ground running and make perfect sense of the best that Vietnam's most historical city has to offer.

Opening like a tear to the east of the Old Quarter, Hoan Kiem Lake offers some freshwater and green respite to Hanoi's hustle. On its northern edge, the Ngoc Son Temple sits on a small island connected to the shore via the scarlet Cau The Huc bridge. Early in the morning, the lakeside fills with residents practicing tai chi, and on weekends, the 7pm to midnight traffic ban gives the area a funfair vibe.

Dive into the Old Quarter

Located in Ba Dinh district near the business area, Hanoi's Old Quarter is the city's busiest attraction, and it’s an unmissable attack to the senses. Buzzing motorbikes maneuver around people in large conical straw hats pushing carts laden with goods along streets lined with French colonial buildings. Come right after sunrise when the light casts ethereal hues over the century-old facades, and find only the most industrious locals busy setting up shop for the day. Signing up for a walking food tour with a local is another good way to explore the quarter’s 36 streets and the best dishes that represent them.

Hunt for the best bun cha

If the late celebrity chef Anthony Bourdain chose to treat Barack Obama to a taste of this quintessential bowl of grilled pork, herbs and noodles, Hanoi’s bun cha must really be quite special. Bún Chả Hương Liên, the hole-in-the-wall restaurant where the duo dined in 2016, has become legendary, but the fun is going around town scouring for worthy competitors. Two good places to start are Lotte Center Hanoi in Ba Dinh and Bún Chả Ba Duc in Quan Ba Dinh.

Standing guard between the Old Quarter and Hoan Kiem Lake, St. Joseph Cathedral is one of Hanoi's most iconic architectural landmarks. Built in 1886, its neo-Gothic style is modeled after Paris' Notre-Dame Cathedral. It's the oldest church in Vietnam's capital and serves the city’s small catholic population. Visitors can enter the church’s hall only during mass, which takes place at 6:15pm daily on weekdays and seven times per day on Sundays.

Learn to cross the road

Crossing through street traffic in Hanoi is a real cultural adventure and a way to get in tune with the city’s rhythms. To the untrained eye, Hanoi’s constant flow of cars and endless lines of motorbikes may look like an impenetrable wall of deadly chaos, but the trick is to be slow, steady, and predictable. Drivers are very much used to dodging pedestrians as they approach, and honking is just a polite way to signal when someone is near. The hardest part is grasping the courage to step off the sidewalk and start walking... especially for the first time.

Hanoi is home to bia hoi, touted as "the world's cheapest beer" because it’s sold for between 5000 and 7000VND per glass (US$0.22 to 0.31). Made from fermented maize, bia hoi is served and consumed by the roadside while patrons sit and chat casually on low plastic stools. Hanoi’s busiest drinking spot is the Beer Corner — the intersection between Tha Hien and Luong Ngoc Quyen in the Old Quarter — a whole road crammed with red plastic chairs, locals, tourists and the echo of their bragging rights.

Try as much banh mi as you can

Born in Saigon as a simple working-class sandwich stuffed with pickled vegetables, cilantro, French ham and home-made pork liver pate, bahn mi is sold from street carts as a hearty breakfast or midday meal. From humble beginnings, it has risen to become a proper foodie obsession, particularly among foreign tourists and overseas Vietnamese, who even started reproducing the heavenly bread at home. The whole of Hanoi is a fair bahn mi playground, with stalls and shops dishing it up at every corner. One of the best is Bahn Mi 25 in Hoan Kiem District, which also offers vegan and vegetarian options.

Believe it or not, ostrich farming has become one of North Vietnam's most profitable enterprises. The Ba Vi mountains near Son Tay, a favorite weekend getaway for Hanoi locals, are a popular spot to try the meat of the African bird while in Asia. It's usually served fried, as a meatloaf, or boiled with vegetables in a hot pot. If exotic meat doesn't appeal, Ba Vi's homegrown hill chickens, fried with fresh peppers, are the best alternative.

Check out the music and art scene

From DJ nights to jazz and alternative rock bands, Hanoi’s nightlife has a few well-established venues basking in music and arts. Since 2010, Hanoi Rock City has hosted live bands, electronic and experimental music, art events and a regular open mic night on Wednesdays. Savage in Tay Ho District opened in 2016 to quickly rise as the city's electronic music club of choice, where both resident and international DJs come to spin the best house and techno beats.

For real strings and shiny brasses head to Binh Minh Jazz Club in the Old Quarter, where a selection of good whiskey pairs to live local jazz ensembles on most nights. The Hanoi Social Club in Hoan Kiem also regularly hosts arts events, besides being a favorite all-day meeting spot to socialize over coffee and beers.

Find calm at the Temple of Literature

Hidden by a walled compound sheltering five separate courtyards, the Temple of Literature (Van Mieu) was built in 1070 under the Ly Thanh Tong dynasty to honor Confucius. The complex also served as Vietnam's first national university. Today, the temple is not just one of Hanoi's most striking, but also a perfectly quiet place to take a break from the city's constant activity. Whether strolling in one of its five perfectly-manicured gardens, or paying homage to Confucius' philosophy at his dedicated altars, the Temple of Literature is an oasis of quiet introspection.

Completed in 1997, this museum pays respect to Vietnam's 54 ethnic groups. It’s particularly handy for those short on time and interested in anthropology: the staggering collection of 15,000 artifacts and 42,000 photographs on display give a quick and comprehensive ethnographic tour of this highly diverse nation. The gardens host a life-sized outdoor collection of traditional houses from Vietnam’s most prominent ethnic groups.

Have an egg coffee in the Old Quarter

Egg yolk coffee, or ca phe trung, is a mixture of espresso with sugar, condensed milk and egg yolk. Invented in 1946 while trying to make cappuccino, the whisked egg yolks were used as a surrogate of the then scarce milk. That trick established this frothy, savory and uniquely Vietnamese brew as a real national success.

Ca Phe Trung can be found in a number of cities across Vietnam, but Cafe Giang in Hanoi’s Old Quarter is where it all started, and where the inventor's son still dishes up the original recipe today. The Note Cafe is also worth a visit, not just for its coffee, but for its very photogenic walls plastered with thousands of hand-written messages left by customers from all over the world.

Learn about Do Paper at Zó Project

Tucked to the south of Hanoi’s West Lake, Zó Project’s tiny boutique focuses on unique handmade products realized with Vietnamese Dó paper (giấy Dó). Produced manually following ancient techniques from the bark of the endemic Rhamnoneuron balansae tree, this heavy-duty, fibrous paper is believed to be able to last up to 800 years. Established in 2013 by Tran Hong Nhung, the social enterprise Zó Project aims at preserving the art of Dó paper-making by working closely with the only two families of traditional artisans left in the village of Bac Ninh, 25 miles (40km) northeast of Hanoi.

Since 2018, sitting with a drink on either side of the narrow railway passage on Tran Phu road in the Old Quarter has become some kind of tourist rite of passage in Hanoi. Known as “Train Street”, the homes along this 300m (984ft) stretch of city rail line turned into feel-good cafes and started spilling tables and serving drinks way too close to the passing trains. The street’s constant surge in popularity forced authorities to try to close the shops down in October 2019 to avoid accidents, but Train Street's cafes have kept operating discreetly. The best time to visit is probably when no trains are approaching: without the crowds, one is freer to observe how real local life unfolds on both sides of this narrow city rail track.

One of the most popular day trips from Hanoi is to the Unesco-inscribed Tràng An Scenic Landscape Complex in Ninh Binh province, about three hours from the capital. Think jade-green valleys backed by limestone karsts flanked by the meandering channels of the Red River Delta.

The village of Tam Coc and its viewpoints that dominate ever-changing shades of paddy fields are as popular as taking a slow boat ride along the Ngo Dong River. Spending at least a night here makes it easier to enjoy the scenery without the crowds. Don't forget the Mua Cave viewpoint, a sweaty 486-step climb to the top of an imposing limestone mountain, where an altar to Goddess of Mercy Quan Am dominates the valley and the snaking river below.

You might also like:
Where to get the best street food in Hanoi
Life on the tracks: my 2 years living on Hanoi Train Street
10 best places to visit in Vietnam 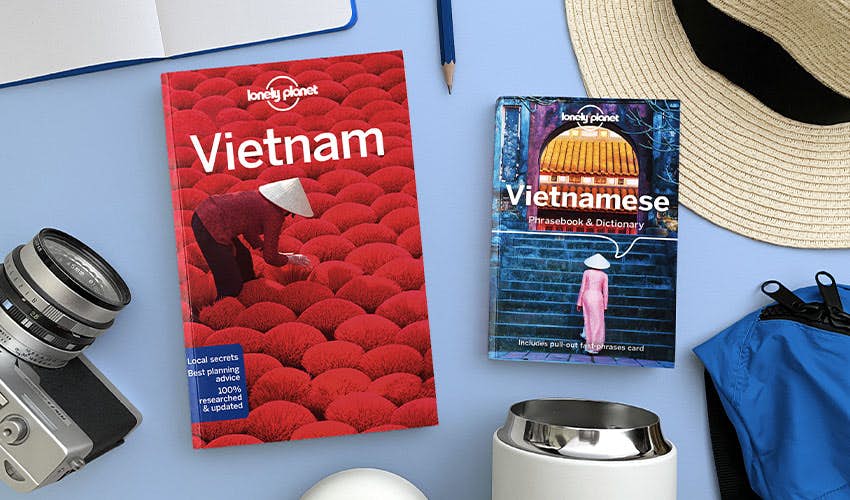 Make the most of your time in Vietnam with Lonely Planet’s range of travel guides and phrasebooks. Be the architect of your own trip as you discover the best things to do in Vietnam through insider tips, suggested itineraries and handy maps.

4 min read • Published about 1 hour ago

6 questions travelers need to ask before visiting Japan this year

5 min read • Published about 2 hours ago

The 10 best things to do in Hong Kong

6 min read • Published about 21 hours ago