Phuket's 10 best dishes: what to try and where to eat it 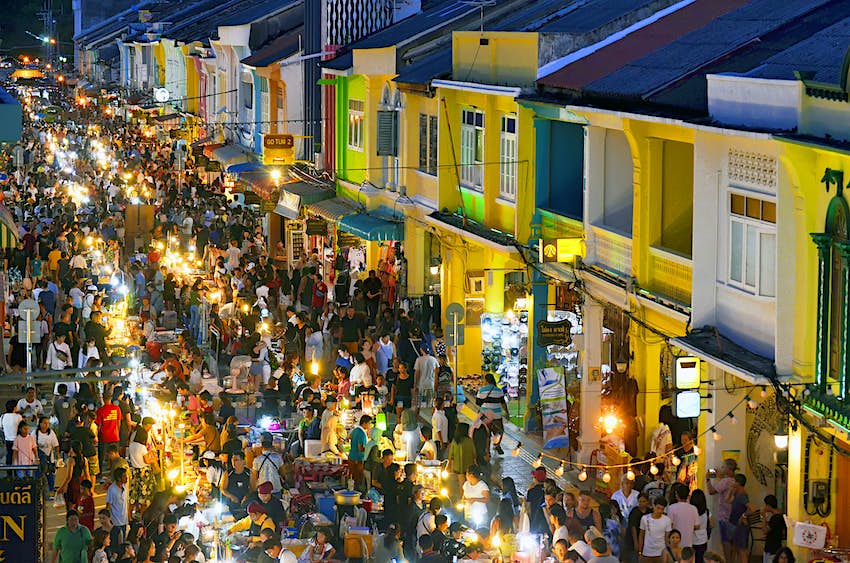 From street-food markets to restaurants specializing in noodles, here are Phuket's best dishes and where to try them © deniscostille / Getty Images

From upscale seafood to downmarket Russian, just about any cuisine is available on Phuket, Thailand’s largest island and one of its biggest destinations. But what do the locals eat?

The answer is much more complicated than pàt tai, as Phuket was a cosmopolitan mixing pot long before the package tourists and sun worshippers started coming.

European traders have been visiting the island since the 16th century, and Chinese and Muslim traders for even longer. But the tin mining boom of the early 20th century brought the biggest and most influential influx of immigrants: Hokkien and Cantonese Chinese, many of whom came via Penang in Malaysia. They introduced their regional Chinese cuisines, but also Malay and Baba-Nyonya dishes, the latter a unique blend of Southeast Asian and Chinese ingredients and cooking techniques.

As a result, the food of Phuket stems from a jumble of influences that has no counterpart elsewhere in Thailand. In Phuket, pork rules, and soy sauce is prized over fish sauce – ostensibly both a result of the Chinese touch. The flavors are generally mild compared to the rest of Thailand. And the Penang connection has also led to a handful of dishes from India, England, and Portugal earning a foothold.

Here are 10 classic Phuket dishes to sink your teeth into. Some can be found across the island, but Phuket Town, the island’s inland capital, is where you’ll find the best versions.

"Hokkien-style noodles" is one of the most ubiquitous Phuket dishes. Vendors across the island, especially in Phuket Town, flash-fry round, hearty wheat noodles with seafood, slices of pork, greens, and an almost gravy-like broth. If you’re feeling decadent, you can ask for your bowl to be garnished with a just-cooked egg. Like many dishes of Hokkien origin, it is savory and mild. Try the dish at long-standing noodle specialist Mee Ton Poe.

Loba (loh·bà) is an offal dish served with a dip

One of Phuket’s most beloved dishes is also probably its most intimidating. Loba combines pork offal – head, heart, lungs, intestines, tongue – braised in five spice powder, with savory deep-fried items such as spring rolls, shrimp fritters, and stuffed tofu. The two disparate elements are linked by a sweet/spicy dip. You can mix-and-match your choices, so don’t fret if braised pork face isn’t exactly your jam. This dish is available at stalls and informal restaurants, such as Lock Tien, in Phuket Town.

Oh tao takes the form of eggs, cubes of taro root, deep-fried pork rinds and tiny oysters fried together in a sticky, spicy, garlicky batter – think Thailand’s famous fried mussel pancake on steroids. This hearty dish is thought to trace back to Chinese tin miners. You can find oh tao on offer at street stalls in Phuket Town and elsewhere on the island.

Shaved ice is a virtually universal dessert, but Phuket’s hyper-sweet, brightly colored, beloved version stands out from the crowd. This icy dessert includes gelatinous cubes made from banana starch and kidney beans, which in Thailand are considered dessert, the lot resplendently drizzled in red syrup. Hard to find outside of Phuket, grab a bowl from the stall at Lock Tien, a semi open-air food court in Phuket Town.

Moo hong takes the form of fatty cuts of pork braised in brown sugar and sweet soy sauce with garlic and black pepper. It’s one of the headlining dishes of the Baba-Nyonya genre, a blend of Chinese and local cooking styles and ingredients, and can be found at slightly more upscale restaurants across the island, such as the charming Raya, located in a former mansion in Phuket Town.

Thailand is home to countless varieties of nam phrik, chili-based dips with varying recipes from province to province. Phuket’s contribution to the genre combines shrimp paste, fresh chilies, lime juice, sugar and, most notably, the eponymous smoked shrimp. As elsewhere, the dish is served with a platter of fresh and par-boiled herbs and vegetables. Grab a plate at Phuket Town restaurants such as the homey, shophouse-based One Chun.

These Thai-Muslim "pancakes" can be found in many regions in Thailand. In Phuket, cooks tear the roti into shreds, creating a flaky heap that’s crowned with a fried egg and accompanied by a small bowl of fragrant curry broth. Aaroon's Restaurant in Phuket Town is a great place to start the day with this very Phuket dish.

Khanom jeen (kà·nŏm jeen) with crab is a local favorite

Thin, round rice noodles served with curry-like toppings form a common base for dishes found across Thailand. But the people of Phuket are particularly fanatical about kà·nŏm jeen – a breakfast staple on the island. The favorite local topping is nam ya pu, a spicy coconut milk-based curry with crab, served southern-style with a huge selection of herbs, vegetables, fruit and seasonings that are meant to be mixed with the noodles and curry. This is dished up at informal restaurants and stalls across Phuket, such as those at the Thanon Ranong Day Market.

Comprising thin, round rice noodles fried with soy sauce and served with a small bowl of pork broth, this dish has all the makings of a Chinese origin story. However, local legend says it was invented on Phuket. Wherever it got its start, Phuket Town’s the place to get a delicious helping, specifically at the food court known as Lock Tien.

Apong (ah·þóng) is a snack with influences from south India

This is the local version of south Indian appom, a thin, crispy crepe-like flatbread made from rice flour. On Phuket, it’s made with a pinch of sugar, and is served as breakfast or a sweet snack, usually from street vendors, such as those who set up at the corner of Soi Sun Utis and Thanon Yaowarat in Phuket Town.

You might also like:
The 15 most amazing places to visit in Thailand
Thailand's 3 best scenic journeys we know you're going to love
Thailand's best beaches from peaceful paradises to parties