20 things to know before visiting Kraków 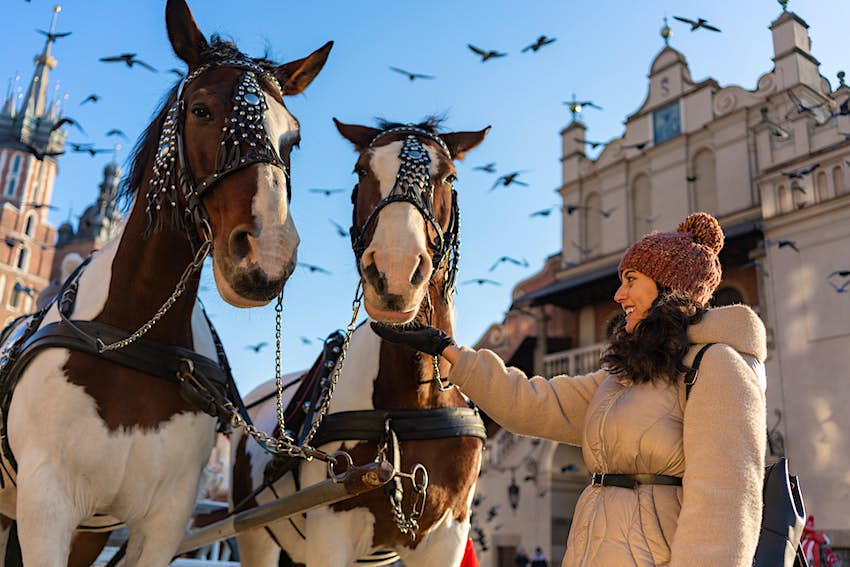 The only major city that wasn’t reduced to rubble during WWII, Kraków is Poland’s most charming urban destination.

The millennia-old seat of kings, it’s home to a fairytale castle steeped in legends of dragons, a Unesco-listed, picture-perfect, church spire- and monument-studded Old Town that’s a match for any European city, as well as one of Europe’s oldest universities that fuels a frenetic nightlife scene. Its popularity requires some advance planning, and while Cracovians are generally easygoing when it comes to dress code and speaking to strangers, there are some notable exceptions to the former.

It’s worth remembering that despite outward similarities with liberal Western European cities, Kraków is very, very Polish. Religion is central to many people’s lives, old mindsets die hard (especially if you’re a member of the LGBTIQ+ community), and weird laws and numerous scams may trip the unwary. Luckily, we’re here to help you navigate your way past any potential pitfalls.

Pack for the right season and for all occasions

Kraków has a continental climate, so your packing list will vary considerably, depending on the time of year you travel. Winters are cold and snowy, often with piercing, icy winds, while summers can be scorching. Most of the time, layers are key, except during the warmest months, when all you’ll want is lightweight, breathable summer wear. A warm, waterproof coat, hat and gloves are a must for autumn and winter. Bring an umbrella or a rain jacket for year-round downpours. Kraków is mostly informal, but consider bringing a dressy outfit or two if you intend to hit the clubbing scene.

Stay in the best neighborhoods for sightseeing

For a city of its size, Kraków is surprisingly compact, so it’s easy enough to flit between its neighborhoods, either on foot or using public transport. Still, most visitors – especially first-timers – tend to base themselves in one of three prominent, attraction-heavy neighborhoods.

The most popular is the medieval Old Town in central Kraków, with its wealth of must-see sights, legendary cellar bars and cobbled lanes. Others choose adjacent Kazimierz, the artistic bohemian ‘hood that was a center of Jewish culture before the war and is now enjoying a revival. Alternatively, head south of the river to Podgórze, the up-and-coming former Jewish ghetto where Steven Spielberg shot much of Schindler’s List.

Few of Kraków’s museums and attractions require advance bookings, but the must-see sights do, so if you have your heart set on visiting any of the following, make arrangements online ahead of time. Exhibitions inside Wawel Royal Castle book up weeks in advance in summer, as do group tours of Auschwitz (though solo travelers may wander around without joining a guided tour). Entry to Rynek Underground and Schindler’s Factory is via timed slot, so buy your ticket a few days before your visit.

Pack your ISIC card and consider getting a Kraków Card

Make reservations for Kraków’s best restaurants ahead of time

Acquire some zloty in advance

Even though Poland is part of the EU, it retains its own currency – the Polish Zloty (zł). Kraków is largely cashless, and you can use your credit or debit card pretty much anywhere; if paying by card, always pay in zloty rather than your home currency to avoid being hit with conversion charges and a crappy exchange rate. Exceptions to cashless transactions include newsagents, public toilets, small shops and outdoor vendors, so it’s wise to have some zloty on you for those occasions. Many of these exceptions will refuse to break a large note for you, so hang on to your loose change.

Have some loose change ready for public toilets

If you find yourself mystified by the symbols on the doors in Kraków’s public toilets, it's a triangle for men and a circle for women. Bear in mind that many public facilities – even in bars and restaurants where you’re part of the clientele – often charge a nominal fee for use, so have some loose change ready.

While smoking in public places in Kraków is illegal, those who enjoy a puff will be thrilled to know that many cafes, bars and restaurants have retained designated indoor smoking spaces, sealed off from the rest of the establishment. While this amounts to cancer-inducing, smoke-filled broom cupboards in many cases, some establishments have opted to allocate a tiny space to non-smokers, giving the vaping and smoking clientele the lion’s share of the place. Such smoker-friendly establishments include Eszeweria, Klub Re and Jama Michalika.

Tip at least 10% in restaurants

It’s customary to tip servers and bar staff in Kraków. Locals will tip around 10% of the bill if eating out, or round up the bill at the very least. Paying 1zl tip per drink in bars is standard and a good idea if the bar is busy and you’d like to be served promptly.

Dress up for nightclubs

With a population of 200,000 students, Kraków is rumored to have more bars than people, and while anything goes in most places dress code-wise, Old Town’s nightclubs are a bit fussier. Check ahead whether that means no trainers, or whether you’re expected to go full suit and tie or dress, and be aware that some places exercise ‘face control’, meaning that they turn you away if you’re deemed insufficiently attractive. It’s no use arguing with the bouncers; in fact, it’s best not even to make eye contact with them.

Strike up conversations with locals

Unlike cities such as London and New York, where striking up conversations with strangers is a massive faux pas, especially on public transport, Cracovians are a polite and approachable bunch who genuinely enjoy talking to foreigners and are happy to give directions if you’re lost. While English is not widely spoken among older generations, many students and hospitality staff speak excellent English.

Remember that Kraków’s churches are not museums

The majority of Poles (over 75%) are Catholic. Very Catholic. If your experience of the Christian faith involves attending church twice a year (if that), Polish enthusiasm for Catholicism may come as a surprise. There is more to Polish Catholicism than the solemn, opulent processions commemorating holy relics and saints, some of which you may be lucky to witness.

For many, Catholicism has long been a source of national and social unity and provided solace during Communist times, when religious practices were driven underground. So if you visit one of Kraków’s many churches, remember that they are revered places of worship and treat them with the utmost respect.

Be mindful of not breaking laws that may not exist in your home country. Dressing up and partying hard is fine, but if you’re foolish enough to appear hammered or make a public nuisance of yourself in front of the local police, expect a 500zl fine, a strip search and an overnight stay in the drunk tank on ul Rozrywka with fellow disheveled vagrants. Riding public transport without a valid ticket and jaywalking (crossing against the light or not on a pedestrian crossing) will also earn you an on-the-spot fine of 100zl.

Be aware of local attitudes towards the LGBTIQ+ community

Poland is a hardcore Catholic country, with anti-LGBTIQ+ sentiment rife among a sizable chunk of the population. While it’s difficult to describe it as explicitly LGBTIQ-friendly, Kraków is the most liberal of Poland’s cities; in 2022, Kraków’s annual Pride parade celebrated its 18th anniversary.

Attitudes towards the LGBTIQ+ community in Kraków are slowly improving. However, public displays of affection (with the socially acceptable exception of hand-holding between young women) are likely to attract jeers and sometimes outright violence – particularly on the high nightlife streets of Floriańska and Szewska on the weekends. That said, numerous nightlife venues in Kraków are either LGBTIQ-tolerant (Movida, Kraina Szeptów, Lastriko) or outright LGBTIQ-friendly (Szpitalna 1, Spolem Deluxe).

Do drink the tap water…maybe

Kraków’s tap water is officially deemed safe to drink, and many locals do, while others avoid it because the quality may be affected by the antique plumbing in many of the older buildings. So if gastric Russian roulette is not your thing, you may wish to drink bottled water or at least purify the tap water first. Speaking of water: it’s not complimentary in Kraków’s restaurants and usually comes in tiny glasses unless you order a large bottle of gazowana (carbonated water) and niegazowana (still water).

Dial the foreigner-friendly lines in case of emergency

While Kraków generally has a low crime rate compared to many Western European cities, visitors need to watch out for pickpockets on public transport and other busy public places and be aware of various scams. Besides the standard emergency number (112 for ambulance, police or fire department), Kraków has separate lines for English and German-speaking foreigners in distress wishing to report a scam or stolen property:  +48 608 599 999 or +48 22 278 77 77, reachable by mobile phone or landline.

Use a private clinic in the case of a medical emergency

If you have a medical emergency, call a private clinic (a list is available from your country’s embassy) rather than deal with the hassle and long queues in one of Kraków’s hospitals.

Given Kraków’s general popularity with foreign visitors, particularly with stag and hen parties from abroad, it’s little wonder that numerous scams exist to take advantage of the inebriated and unwary. In Old Town, avoid promoters outside ‘gentlemen’s clubs’ (often disguised as whisky bars) who try to lure men in with promises of discounted drinks. Once inside, you’ll be told when paying by card that the payment didn’t go through when they are, in fact, charging you multiple times.  Some travelers have reported having their drinks spiked to make them more intoxicated and easier to take advantage of.

If you’re a foreign man, be wary of attractive women taking a massive interest in you and convincing you to take them to a bar (where, unbeknown to you, they are employed) and buy them a drink, whereby you’ll be charged stratospheric prices for the drinks and intimidated by thuggish bouncers into paying up. Also, be aware that when you order drinks in bars and clubs, it’s important to specify your preferred brand of alcohol; otherwise, the bar staff will automatically reach for the most expensive top-shelf brands, as they make a commission on the drinks they sell. There’s no shame in asking for the cheapest option on the menu.

You can change currency into zloty anywhere with a ‘Kantor’ sign, but beware of dodgy 24-hour currency exchanges offering 0% commission on the exchange because the exchange rate is terrible. Instead, go to the reliable currency exchanges on the top floor of the Galeria Krakówska (above Kraków’s main train station) or the one at ul. Karmelicka 1. Equally, beware of some ATMs around Kraków that offer terrible exchange rates and charge high withdrawal fees.

Unlicensed taxis that end up charging you whatever price they see fit are the scourge of many visitors to Kraków. Luckily, they are easy enough to avoid by booking a fully licensed taxi such as Radio Taxi, Mega Taxi or Eko Taxi, or else opting for Bolt or Uber (though, unlike licensed taxis, they may not drive within Old Town).