Best things to do with kids in Seattle 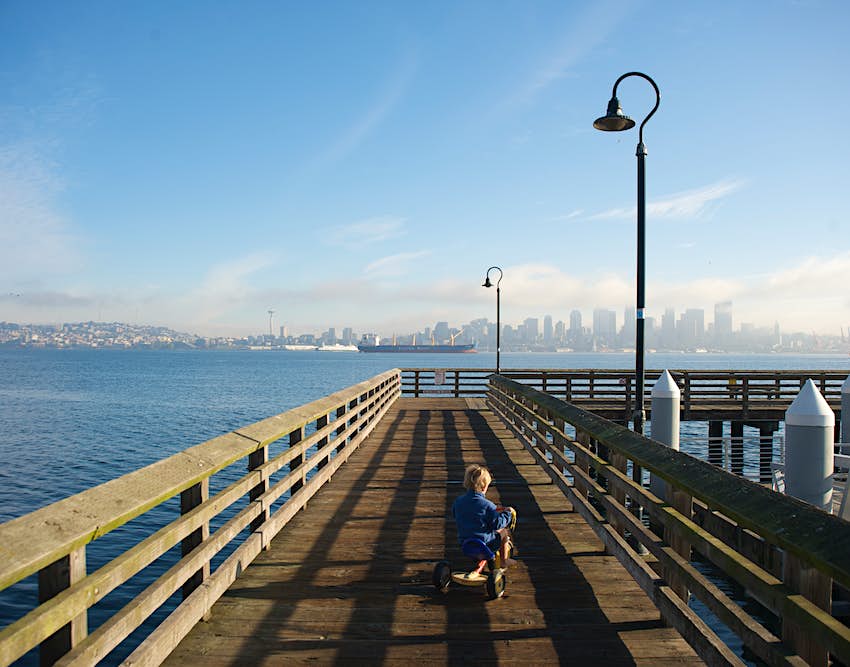 It’s a common dilemma. How do you organize a stimulating family-friendly trip to a US city that will satisfy activity-hungry children but also be interesting enough for accompanying adults? The short answer: visit Seattle.

Seattle is where glass orbs and second-hand chewing gum pass as intergenerational art, and squabbling families can find common ground in museums dedicated to pinball and pop culture.

Is Seattle good for kids?

Seattle will entertain, pacify and often educate your energetic kids without their even realizing it. The city is well set-up for small visitors, but watch out for Seattle's ultra-steep hills if you're pushing a stroller or have kids on scooters. Bathrooms in larger stores and venues will usually have changing tables. Kids often qualify for discounted metro bus and ferry fares.

Best things to do in Seattle with kids

Some of Seattle's kid-friendly attractions are obvious, such as a children's theater and a zoo. Others are more serendipitous: don’t miss the pinball museum or the exciting urban theater of Pike Place Market. ParentMap has child- and family-friendly activity listings around the city.

The Seattle Center has the most concentrated stash of kid-friendly activities, including the professional Seattle Children’s Theater and the Children’s Museum, which is great for under 10s. In the summer, balloon-twisters, singers and dancers entertain the crowds alfresco. Aside from the interesting and educational permanent displays, the Pacific Science Center has some excellent touring exhibits. Past shows have included Harry Potter movie memorabilia and King Tutankhamun’s jewels. In the Museum of Pop Culture, you could fill an afternoon in the Sound Lab, where adults and kids can requisition drum kits, guitars and keyboards, and even form their own band for the special "On Stage" feature.

Top 23 things to do in Seattle

To satisfy all tastes, hit the Space Needle, where speedy elevators zip visitors to the top of the iconic tower that adorns practically every Seattle postcard. This streamlined, modern-before-its-time tower built for the 1962 World’s Fair has been the city’s defining symbol for more than 50 years. The needle anchors the Seattle Center and draws more than one million annual visitors to its flying saucer–like observation deck and pricey rotating restaurant. Kids will be suitably entertained by the multitude of push-button devices at the summit, including powerful telescopes.

The best time to go to Seattle

Reinforcing Seattle’s position as a leading city of the arts, the exquisite Chihuly Garden and Glass showcases the life and work of dynamic local sculptor Dale Chihuly. It's possibly the finest collection of curated glass art you'll ever see, and Chihuly uses his playful imagination to cut seamlessly across age boundaries. Wander through Chihuly's creative designs in a suite of interconnected dark and light rooms before being deposited in an airy glass atrium and – finally – a landscaped garden in the shadow of the Space Needle. Glassblowing demonstrations are a highlight.

Woodland Park Zoo is considered one of the best zoos in the USA, and it's home to 300 species, including snow leopards, lions and tigers. It was one of the first in the country to free animals from their restrictive cages in favor of ecosystem enclosures, where creatures from similar environments share large spaces designed to replicate their natural surroundings. Feature exhibits include a tropical rainforest, two gorilla exhibits, an African savanna and an Indian rhino reserve.

Situated on Pier 59 in an attractive wooden building, the Seattle Aquarium is a handy distraction for families with itchy-footed kids. The entry lobby instantly impresses with a giant fish-filled tank called "Window on Washington Waters," and background music is sometimes provided by live string quartets. The aquarium houses harbor seals and resident sea and river otters, which float comically on their backs. An underwater dome on the lower level gives a pretty realistic glimpse of the kind of fish that inhabit the waters of Puget Sound, and the daily diver show is the best of the aquarium's live events. For kids, there are plenty of hands-on exhibits, including a pool where they can stroke starfish and caress sea urchins.

Got kids? Got kid-like tendencies? Love the buzzers and bells of good old-fashioned analog machines? Lay aside your iPad apps and become a pinball wizard for the day at the Seattle Pinball Museum, a fantastic games room in the International District, with machines from 1960s retro to 2020s futuristic. Admission buys you unlimited games on everything from a 1963-vintage Gottlieb to a 2012 AC/DC-themed Stern that blasts out tinny versions of "Back in Black." Stools are provided for vertically challenged youngsters while bottled beer from the local Elysian brewery will quench parents' thirst.

A cavalcade of noise, smells, personalities, banter and urban theater sprinkled liberally around a spatially-challenged waterside strip, Pike Place Market is Seattle in a bottle. In operation since 1907 and still as soulful today as it was on day one, this wonderfully local experience highlights the city for what it really is: all-embracing, eclectic and proudly unique. Incidental market entertainment includes charismatic fish throwers who lob scaly salmon back and forth with the dexterity of baseball pitchers and buskers who spin hula hoops while playing guitar. Even shopping here can be passed off as kid-friendly. Aspiring magicians and pranksters should head to Market Magic, which sells fake dog poop, stink bombs, water-squirting rings and magic tricks. Elsewhere, the spooky apothecary of Tenzing Momo looks straight out of Diagon Alley in the Harry Potter books. An obligatory lunch stop is Beecher’s Handmade Cheese, an artisanal cheesemaker that stirs curds in a street-side window.

25 free things to do in Seattle

Seattle's famous gum wall, a communal art project open to any passing adult or child with their mouth full of chewing gum, is one of those cultural monuments you can smell before you even see it. The sweet aroma of chewed gum wafts from this strip of Post Alley, which is completely covered in the stuff. It's a popular selfie spot, and is worth a peek for the sheer magnitude of it alone. It cannot be emphasized enough just how much gum there is!

Olympic Sculpture Park, an ingenuous feat of urban planning, is an official offshoot of the Seattle Art Museum and bears the same strong eye toward design and curation. There are more than 20 sculptures to stop at and admire in this green space that sprawls out over reclaimed urban decay. You can also enjoy them in passing while traversing the park's winding trails.

Alki Beach has an entirely different feel from the rest of Seattle: on a sunny day this 2-mile stretch of sand could be confused for California. It's ideal for sandcastle building and all of those other age-old seaside pleasures. There’s a bike path, volleyball courts on the sand, and rings for beach fires. Look for the miniature Statue of Liberty, donated by the Boy Scouts. There are good tide pools further west around the lighthouse.

Where to eat with kids in Seattle

Most restaurants in Seattle are kid-friendly. The only places you’re likely to see "No Minors" signs are pubs, gastropubs and dive bars, though many pubs will serve families as long as you don’t sit at the bar. Some places introduce a no-kids policy after 10pm.

Pike Place Market has the widest selection of cheap, immediately available food and is a fun place to hang out and eat. You’ll struggle to find anyone (kid or adult) who doesn’t fall instantly in love with the mac 'n' cheese cartons sold at Beecher's Handmade Cheese or the flaky pastries rolled before your eyes at Piroshky Piroshky. Belltown’s La Vita é Bella is a traditional family-friendly Italian trattoria. Every youthful visitor to Seattle should be allowed at least one treat from Top Pot Hand-Forged Doughnuts, preferably for breakfast. Ivar’s Acres of Clams makes a good post-aquarium fish-and-chips lunch. Watch out for the hungry seagulls!

This article was originally published in December 2014 and updated in 2021.

You might also like:
The Space Needle: get to know this Seattle icon
A guide to Seattle's Alki Beach
The 8 best day trips from Seattle

4 min read • Published about 1 hour ago

6 questions travelers need to ask before visiting Japan this year

5 min read • Published about 2 hours ago

The 10 best things to do in Hong Kong

6 min read • Published about 21 hours ago