Unexpected experiences in the Qatari desert 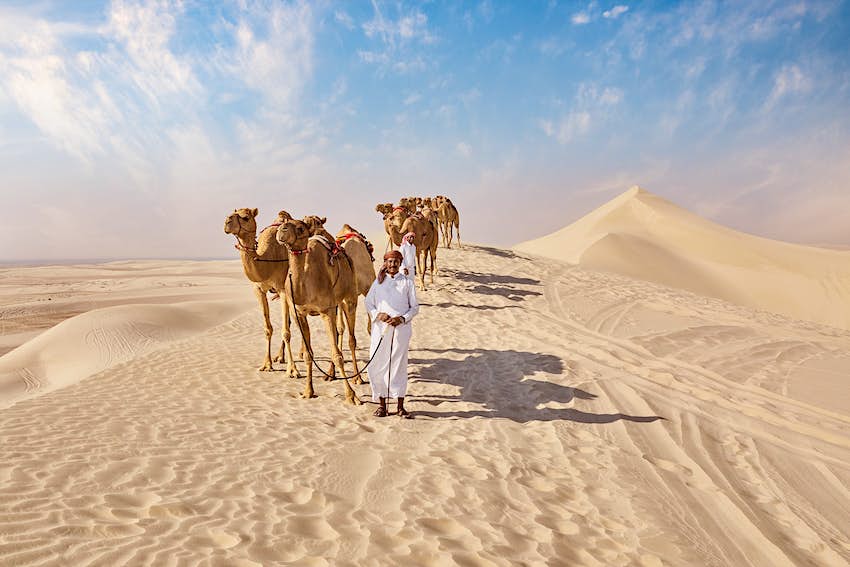 The desert of Qatar, one of the few places in the world where the sea meets the sand, will leave you changed forever © Qatar Tourism

The Qatari desert offers some of the planet’s most surreal and splendid scenery – a land of wide-open beauty, shaped by the steady forces of wind and sun. It’s also a place of solitude, where a slow camel ride across time-worn tracks connects remote campsites to settlements that seem to blend into their surroundings.

Look closer (or ask a local) and you might be surprised by how much there is to see in the sand. The Qatari desert offers history to be found, fun to be had, sights to be explored and memories to be made. Come see this spiritual tapestry, one of the few places in the world where the sea meets the desert, and leave changed forever.

Get to know the deserts

In Qatar you’ll find two different types of deserts. Picture-perfect sandy dunes hem the Khor Al Adaid, the Inland Sea. They are an extension of the Rub-al-Khali, the Empty Quarter that stretches along Oman, Saudi Arabia and the UAE and is the world’s largest sand desert. Then there is the hamada, a land of otherworldly rock formations like the ones found in the north-western region of Zekreet.

The astonishing Khor Al Adaid, on UNESCO’s tentative world heritage list for its ethereal beauty, is one of the main attractions in Qatar. Stunning ever-shifting sand dunes lie beside the turquoise waters of the ‘Inland Sea,’ a salty inlet from the Gulf.

The dunes seem to beg to be explored and if you answer the call, you should definitely go by 4WD. Hire a local, skilled driver to take the wheel and show you what’s possible, going at high speeds up, down and across the dunes in an exhilarating joyride.

Make time for a picnic along the coastline of the inlet – between November and March it’s alive with pink flamingos who spend the winter here. You can also ride camels through the dunes, slide on sand boards down the soft swells, go scuba diving in the warm, inviting waters, or stay the night in a Bedouin camp. Settle down after sunset for a barbecue dinner by a bonfire, gaze at the stars in the seemingly endless sky unspoiled by light pollution, then wake to watch the sun rise over the dunes.

For an unexpected audio experience you can’t get anywhere else, search out the so-called Singing Dunes, which lie inland between the communities of Al Wakrah and Mesaieed. While it might be a stretch to say they ‘sing,’ many of the dunes do seem to groan as you slide down them on a sandboard. This is reportedly due to the compression of the grains of sand – but since not all dunes exhibit this phenomenon, the horseshoe shape of specific dunes might have something to do with it as well.

From sea to dune, adventure abounds in Qatar

North of the capital of Doha, there is a wealth of history to discover in the Qatari desert. On the main road to the north you’ll find the Barzan Towers, built with coral, limestone and mud in the late 19th century as lookout towers for approaching Ottoman ships. The structures’ walls are 40 inches thick, with wooden poles marking the floors. The towers, which seem to rise out of the desert itself, are currently being restored and a visitors’ center is being added.

Further on you’ll find something few people expect to find in Qatar, or in the desert at all: pre-historic rock carvings. At Al Jassasiya you can see these well-preserved petroglyphs on flat rocks at a site you would normally drive past without thinking twice. But stop and get out, and you will discover more than 800 carvings of fish, sailboats and what many experts believe to be game boards. You can almost picture the people who lived here thousands of years ago throwing shells or small pebbles into these symmetrical holes in the rock – playing a game like mancala while waiting for the fishing nets to fill.

There is some dispute as to exactly how old these petroglyphs are, with estimates ranging from 8,000 BC to the 10th century AD. Either way, considering the nomadic lifestyle of the region’s people, these rocks provide a glimpse into desert culture and a rich history of Qatar.

In these eternal deserts of otherworldly beauty, the dry air has preserved several forts worth exploring for the stories they tell of Qatar’s history. One of the oldest is Al Wajbah Fort, built in the year 1882 – it’s only 9.3 miles west of Doha near Al Rayyan, with a distinctive red border to its sturdy wall. The best preserved is Al Zubara Fort, which was recognized as a UNESCO World Heritage site in 2013. Built in 1938 by Sheikh Abdullah bin Jassim Al Thani, the fort is located near the deserted town of Zubara and incorporates a small museum and a rather sleek monument.

Along the coastline, toward Al Ruwais, there are the abandoned picturesque Al Jamail fishing villages, which are fun to explore, and south from there you’ll find the Al Thaqab Fort, sitting on a site which archaeological evidence suggests had been inhabited since the 10th century. ‘Thaqab’ means ‘the water in the bottom of the valley after the rain,’ which references a deep fountain near the fort, which would have brought prosperity to the region.

One of the most surprising sights in the Qatari desert is the amazing art installation by Richard Serra, titled East-West/West-East. In the northwest of the peninsula 50 miles from Doha, in the region of Zekreet, with its wind-eroded rock formations, stand four 50ft-tall steel plates along a stretch of desert spanning more than half a mile. After making your way there, with parts of the drive off road where the journey becomes part of the adventure, the rusty-red steel plates rising against the shifting, sand-colored background makes for the most impressive and powerful art installation in Qatar.