Finding sanctuary in one of America’s few Native-owned breweries 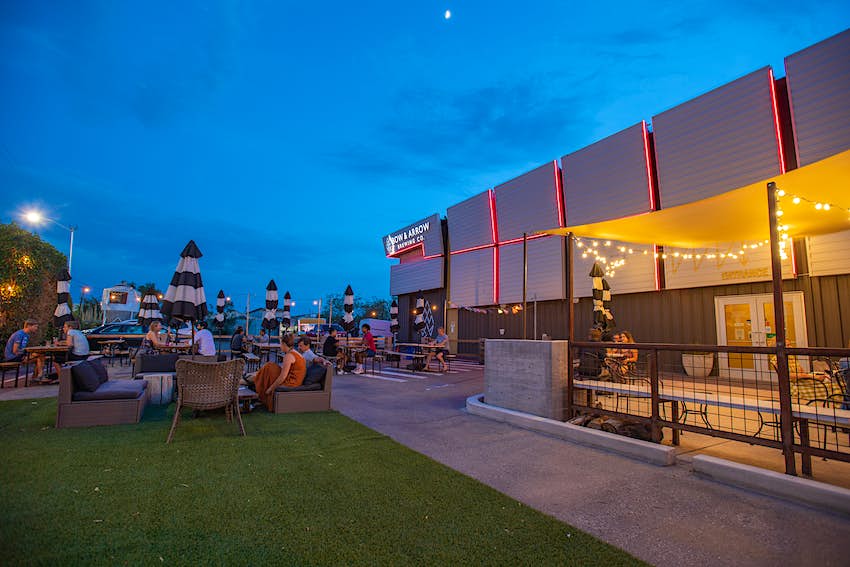 Writer Simon Moya-Smith goes in search of a cold one in sweltering Albuquerque. He also finds a place where stereotypes go to die.

It was 4 p.m. and hot as hell when I rolled into Albuquerque, New Mexico. This is the desert, after all. “We’ve got Bark Scorpions all over the place in this state,” a white man with a handlebar mustache wearing a stained cowboy hat said to me in a small dusty hamlet an hour west of the city.

“Check behind the toilet before you sit down, son,” he said. The cowboy sat at a table across from mine and was wolfing down a plate of meat and vegetables that would choke a walrus when he overheard me tell the waitress that I was “just passing through.”

The man, whose name I didn’t get, proceeded to ramble about the rattlers and fanged arachnids and everything else that’ll kill you in New Mexico if you fail to pay close attention. “Well, I’ve got to go,” I said. “Where to?” he asked. The cowboy laughed into his frothy beer when I told him I was on my way to Albuquerque, far from those evil Bark Scorpions. “They’ll get you there too, pal,” he said. “Welcome to New Mexico.”

The only Native woman-owned brewery in the USA

I was stoned on too much caffeine with a phone nearly dead, $100 to my name, and still no hotel room booked for the night when I arrived at Bow & Arrow Brewing Co., a Native-owned and operated joint right off the interstate. I decided to drop in because I felt the need to be around my people, at least for a while. That cowboy had put me in a jittery state. As I ambled up to the brewery, I noticed a written sign on the glass door that read, ‘NO JERKS.’ “OK, Simon, behave,” I thought.

A Native guy with a bun sat by two oak barrels and leafed through what appeared to be a script while an older Native gent donning a ‘YOU ARE ON NATIVE LAND’ cap, sat quietly at a table by the door.

Shyla Sheppard, founder and CEO, soon arrived and joined me on the patio. Her long black hair fell upon a bright yellow T-shirt. The words on it read, “BOW & ARROW BREWERY ABQ NM.” Her presence immediately demanded my full attention. Instinctively, I sat straight in my chair. I could feel my spine locking. There are very few people in this world who prompt that kind of response from me, and Shyla is certainly one of them.

It began to rain into my Peanut Provisions Imperial Stout as Shyla told me that she’d ditched her career in finance to kick-start this business. When she launched the venture in 2016, Shyla, who is Mandan/Hidatsa, had to deal with a gaggle of plaid-clad, beer-bro types at conventions all over the country. They didn’t take her seriously because all they saw was a young, brown, Native woman and not a formidable brewer. Indeed, the American craft brew scene is an avalanche of white men and they aren’t exactly known for buddying up to anyone who doesn’t massage hops into their beard for kicks.

“Did you experience any push back or harassment when you first opened?” I asked. Shyla takes a second. “I can’t really think of anything,” she responded. Then, four days later, I got a message from Shyla. “Dude,” she wrote, “I realize I must’ve blocked out the graffiti that was sprayed near our gates at the brewery. It was red paint and said, ‘WHITE POWER.’ That was super early on.”

Back at the table, before she had remembered the racist attack, Shyla offered me a hazy IPA called Cactus Flats Mosaic, which is made with Sabro hops, a variant of Neomexicanus, the only hop indigenous to North America.

Then we went on a quick tour of her wood-bedecked beer palace festooned with Native art, oak barrels, and a long bar where, in the days before the pandemic, guys could sit and cry into their beer after a breakup or where two people could meet for the first time and later make out in the parking lot as they waited for their order of tacos al pastor from the taco truck.

Once, years ago, I’d brought my mother, who lives just out of town, into Bow & Arrow. “Jesus, it’s beautiful in here,” she said. “The aroma. The wood. Is that a buffalo?” I asked Shyla about it, the buffalo. It’s a white, three-dimensional piece made of paper or maybe cardboard, and it juts out above your head as if to keep a weather eye on the people sipping pints and telling tales down below.

Shyla told me her late grandfather, Dean P. Fox, a revered Mandan and Hidatsa himself, would regale her with stories of the buffalo: They don’t turn their backs on the winter storm or even the piercing wind and the pain, he had said to her. They face it head on. And in that moment, Shyla’s energy, her badassery, that thing about her which prompted my spine to stand in the locked position, made complete sense.

Julia Romero, a friend and photographer, joined for the tour. Shyla led us into the back of her Willy Wonka-like factory. It’s a place of malt and magic. At that point, I could feel the beer biting down on me. I thought about getting tacos and making out with someone. Neither of those things happened, but I did quaff another pint.

Two days later, I decided to go back to Bow & Arrow Brewing Co. but I didn’t tell Shyla I was coming. I just wanted to eye the place, unseen – be a fly on the wall.

Four Natives sat at a table on the patio. They might’ve been Diné. Perhaps Laguna Pueblo. At one of the longer tables, a man and woman were hitting it off. They both laughed at each other’s bad jokes, which is always a good sign on a first date.

Another couple knocked back a few beers while their baby slept in an expensive-looking stroller. And then there was me, sipping a just-released triple IPA the server hipped me to. “Yes, please,” I said when he asked if I wanted another. “By the way, what do you know about Bark Scorpions?”

There were no Native actors reading scripts on the patio that night, but it’s a place where one can feel safe to do so, and where women, especially women of color, can avoid the ugly masculinity found at nearby seedy bars and sleazy breweries. Julia said as much while snapping photo after photo.

“I feel like I can come here and have a drink and not feel pressured to talk to anyone or get hit on,” she said.  Bow & Arrow is indeed a safe space, where BIPoC, LGBTIQ+, and every beautiful creative can sit and read and write strange words on the patio in the rain without fear of bigots, racists, and “good ol’ boys” looking for a bit of twisted action.

And there are very few safe spaces in this part of the country after the political shitstorm rolled through in 2016. New Mexico can be a racist place, and over the past four years, it’s gotten worse. White men shout things like “go back to the reservation!” This is cowboys-and-Indians country, where cowboys openly shun and ridicule the Natives living in border towns and where Natives know where they should never venture alone, and especially at night.

And wretched stereotypes are everywhere in these parts. The racists are not at all hesitant to spew their hateful thoughts about Natives in the diners right off I-40. They mutter that we Natives go to college tuition-free and then receive monthly government checks (false and false).

Natives hear that one often, along with the claim that we have no control when beer is in the room, which is of course also racist and false. As I sipped my Native-brewed IPA, I recalled a time, back in 2008, when I was a staff writer for the now dead Rocky Mountain News. The newspaper had just hired a bright-eyed scribbler. My colleagues and I welcomed her by taking her down the block for drinks and tacos. An older white colleague heard me order a beer and he couldn’t help himself: “But don’t Indians struggle with beer? Are you good?”

“Are you literally leaning into the stereotype that we’re all drunks?” I recalled snapping. “Are you f----- serious?”

He turned beet red. White people blush. While we Natives can feel bashful, we don’t turn red. Another racist stereotype, this time manifested in a racist slur. You know which one. Back at Bow & Arrow, it was time for me to go. I grabbed my notepad, shoved it down the back of my jeans, finished the last of my triple IPA and hit the road. A Native guy driving by saw me trudging with my massive backpack by the railroad tracks and shouted, “hey, brother!” He held a water bottle outside the driver-side window. “No, thank you!” I yelled back. “Beware of the Bark Scorpions!” He smiled and nodded and drove toward the direction of Bow & Arrow where I imagine he sat at those light-blue barrels and enjoyed a cold one in complete comfort and safety.