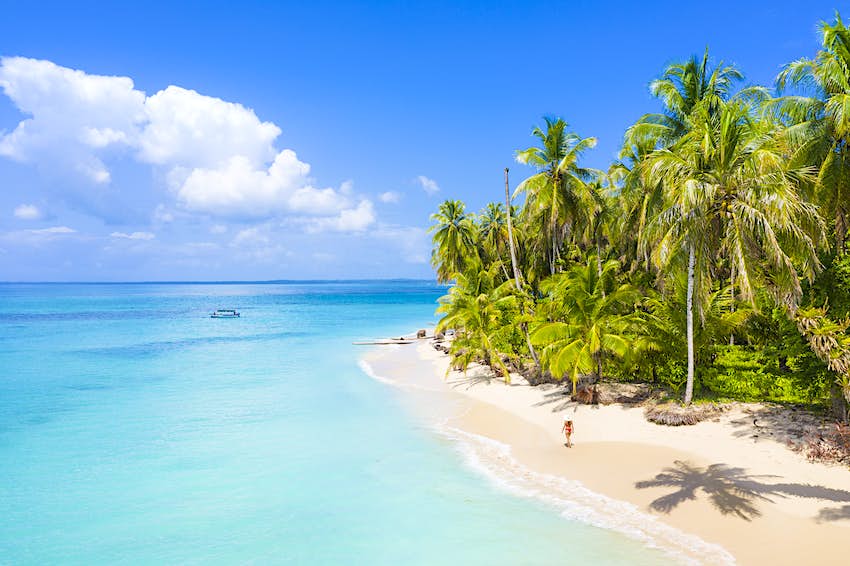 The islands of Central America have all the palms, blue waters and blond sand beaches you could ask for © Andrea Comi / Getty Images

You have to pity historic seafarers – with so many paradise islands to choose from in Central America, it must have been a daily challenge deciding where to weigh anchor. Stunning specks of green jungle and blond sand dot the coastline of the isthmus, all different from one another, and some quite unusual.

To set the scene, one island – more than 300 miles off the coast of Costa Rica – is said to have inspired Robert Louis Stevenson’s Treasure Island. And real-life pirates once menaced this stretch of ocean, setting up secret bases on islands such as Roatan 0ff the coast of Honduras.

Many of the best-known isles are strung out along the Caribbean Coast, but there are also islands off the Pacific Coast, and more dotted around Central America's volcanic lakes. Some are composed of limestone and sand, while others were thrown up by volcanoes or spawned by coral reefs, and all offer a uniquely Central American taste of the tropics.

Regardless of which island you choose, pack your sunscreen and a sense of adventure. Here's our pick of the best islands in Central America.

Best for a Caribbean vibe

When people envision a dream Caribbean getaway, clear turquoise waters, swaying palm trees and brightly colored weatherboard houses are almost obligatory, and you'll find all of this and more at Bocas del Toro. This lively archipelago off the northwestern shore of Panama consists of a sprinkling of sun-sizzled islands, all with different vibes and offerings, along with hundreds of tiny uninhabited islets.

You can show up by plane from Panama City or David, by ferry boat from Almirante, or from Puerto Viejo and Cahuita in Costa Rica. Most visitors stay on Isla Colón, the most popular and populated island, but you can also park up on quieter, forested Isla Carenero or Isla Bastimentos – the largest and most chilled out of the islands.

Short trips by water taxi connect these and other main islands, and popular ways to pass the time include boat trips to spot dolphins and mangrove birdlife, inland hikes, surfing, coastal kayaking and snorkeling, and tours of cacao farms, plus plenty of lazing on the sand.

Best for reefs and nightlife

A sizable crowd of North American escapees have set up base in the seaside condos on pretty Ambergris Caye, the largest island on the Caribbean coast of Belize. Who can blame them? From beaches and diving on the largest barrier reef in the Americas to buzzing nightlife, Ambergris Caye has everything.

For starters, you’ve got the sugar-sand beaches and mangrove-lined lagoons, and you can add in glitzy resorts and the lively downtown hub of San Pedro, frequented by convivial locals and sun-dazed tourists zipping around in golf carts. It's the perfect mix for travelers who like a bit of comfort and action with their island paradise.

And Ambergris offers seemingly infinite opportunities for recreation – beachside water sports, waterslides and ziplines, secret beaches, and of course, spectacular diving and snorkeling on the barrier reef system offshore. Spend a day here and you'll quickly understand why this is Belize’s top tourist draw. Getting to Ambergris is easy by boat from Belize City, Corozal or Chetumal in Mexico, or by plane from airstrips all over Belize, but leaving can feel much harder!

Formed by two conjoined volcanoes rising from the middle of Lake Nicaragua, the island of Ometepe is Central America’s premier stop for backpackers seeking outdoor adventure. Thrill-seekers arrive by ferry from the port town of St Jorge and dive straight in, renting scooters, riding horses to jungle waterfalls, kayaking on the Istián River or summiting the 1394m (4573ft) Maderas Volcano.

For less intrepid travelers, there’s great swimming on the beaches near the Ecological Reserve Charco Verde – a pretty lagoon sold rather short by its prosaic name which means 'green puddle.' Finding petroglyphs is another rewarding activity; nearly 1700 carvings adorn rocks across the island. We also recommend taking a tour of Finca Magdalena, a large organic coffee farm that also doubles as a hostel and restaurant.

Formed by an underwater mountain range, these long, narrow wisps of land off the northern coast of Honduras offer some of Central America’s best underwater adventures. The largest and best-known island, Roatán, was once a notorious pirate hangout, but these days it caters to rather more mid-range travelers, drawn here by chic resorts and paradisiacal white sand beaches. Neighboring Guanaja is mostly visited by divers on all-inclusive packages.

To the west, tiny Utila is the budget option, with abundant cheap accommodation, a fun traveler scene, and some of the most affordable scuba certification courses in the world (with open-water certification going for around US$285). Additional draws include year-round whale shark sightings and backpacker parties that roam around the island's bars.

Fast ferries run to the islands from La Ceiba on the mainland, but some visitors opt to fly, with direct shuttle flights to Roatán from the US as well as from La Ceiba and other cities in Honduras.

Best for escaping the world

An adventurous stopover for those traveling between Panama and Colombia, the Archipiélago de San Blas – or Guna Yala, as locals call it – is a 365-island stunner self-governed by the Guna community, the first indigenous group in Latin America to secure political autonomy. There’s been almost no development here save for palm-thatched villages and livestock enclosures, and the tourist experience is delightfully rustic. There are no resorts, just camping grounds and cabañas (beach huts), and no internet access, which is exactly the point.

Most travelers arrive on sailboats from the mainland port of Gardi (Cartí) and kick back beside pristine, powdery beaches. Days are spent frolicking in the crystal-clear surf or gliding over coral reefs with masks pointed down at the undersea ecosystem. A stay here is also a chance to immerse yourself in Guna culture, which is famed across the region for its traditional dancing and artful crafts.

The tiny islands of Las Isletas, Nicaragua, are great for day-trippers

You can stay over on some islands, but day-trippers can cruise around the islets in a panga boat or paddle around by kayak and spy on the opulent vacation homes of some of Nicaragua’s most prosperous families. Most of the islands are only big enough for a single home, restaurant or resort, but one island boasts an 18th-century Spanish fortress. For an utterly tranquil escape, hunker down at the Jicaro Island Lodge for a few days.

Caye Caulker, Belize is the epitome of relaxation

If Ambergris Caye is Belize’s hyperactive and attention-grabbing diva, Caye Caulker is its chilled-out, devil-may-care younger sibling. This slender island is sought out by international backpackers and footloose families who like to spend their vacations relaxing in hammocks beside white powder beaches, and sipping fruity rum-based drinks at beachside reggae bars.

For those who simply must go exploring, there are bikes and golf carts for rent and the impossibly turquoise sea beckons on all sides, with great snorkeling and kayaking and chances to spot manatees in mangrove lagoons. Visitors arrive by ferry boat or plane either from Belize City or from Ambergris Caye.

Best for a low-key island escape

Off the Caribbean coast of Nicaragua, these far-flung islands are blissfully devoid of large-scale development. Instead, you'll find stilted-mounted, multi-colored cabañas, toothsome seafood and idyllic, unspoiled beaches. Lobster catching and tourism are the principal industries, and popular island pursuits include relaxing in hammocks strung between palms and snorkeling in the bathtub warm sea.

The two Corn Islands – Great Corn and Little Corn – are a half-hour boat ride apart and are accessed via plane or ferry from Bluefields, or flights from Managua. Tourists tend to prefer Little Corn as it’s the more charming of the two, with better snorkeling and diving and a bigger selection of restaurants.

Easy going Flores, Guatemala, is the gateway to Mayan wonders

In the southern part of Guatemala's Lake Petén Itzá, backed by vast swaths of rainforest and accessed by a narrow causeway, Flores is first and foremost a base for exploring Tikal, the most impressive ruined Mayan city in all of Central America. But it’s a lot more than that.

Cobblestone streets, romantic plazas and restaurants and guesthouses with elegant roof terraces define this easygoing town, and it even has its own set of modest Mayan ruins lining the lakeshore. Flores is also a perfect launching point for lake swimming or boating, and a place to take lovely sunset strolls along unsubmerged sections of the promenade that rings the island.

About 300 miles southwest of mainland Costa Rica, Parque Nacional Isla del Coco is a far-flung national park and UNESCO World Heritage site with a rich seafaring history. This remote island was reputedly the inspiration for Robert Louis Stevenson’s Treasure Island, and off its shores, hammerhead sharks gather by the hundreds because their food source is constantly replenished by cold, nutrient-rich waters colliding with a submerged mountain range.

Whale sharks and humpbacks often show up for the party, as do divers on liveaboard trips from Puntarenas on the Costa Rican mainland – which are the only way to reach this somewhat inaccessible idyll. Because the island is the only source of freshwater for hundreds of miles, it became an important refuge for whalers and raiding pirates in the 17th century. Treasure is supposedly hidden within the island's yawning caves, though numerous expeditions have so far failed to unearth anything of significance. 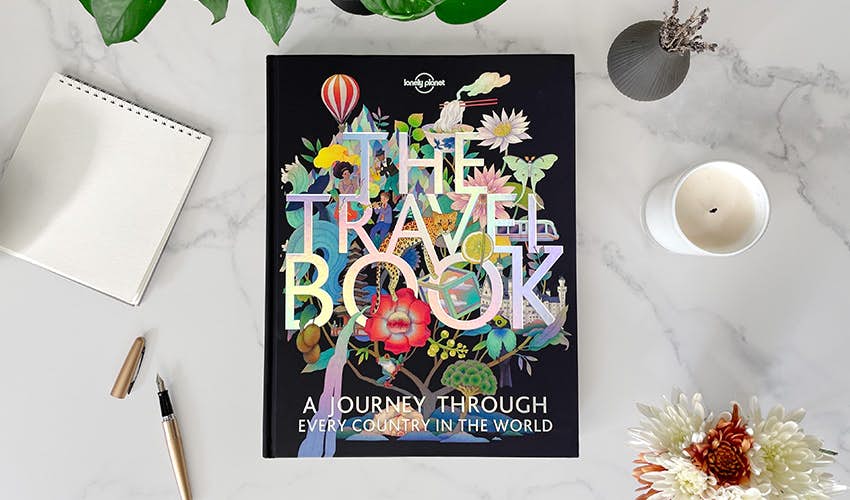 Get ready for a journey through every country in the world. This fourth edition of The Travel Book features incredible photography that illustrates each country, accompanied by a profile that includes details of when to visit, what to see and do and how to learn more about the country’s culture.