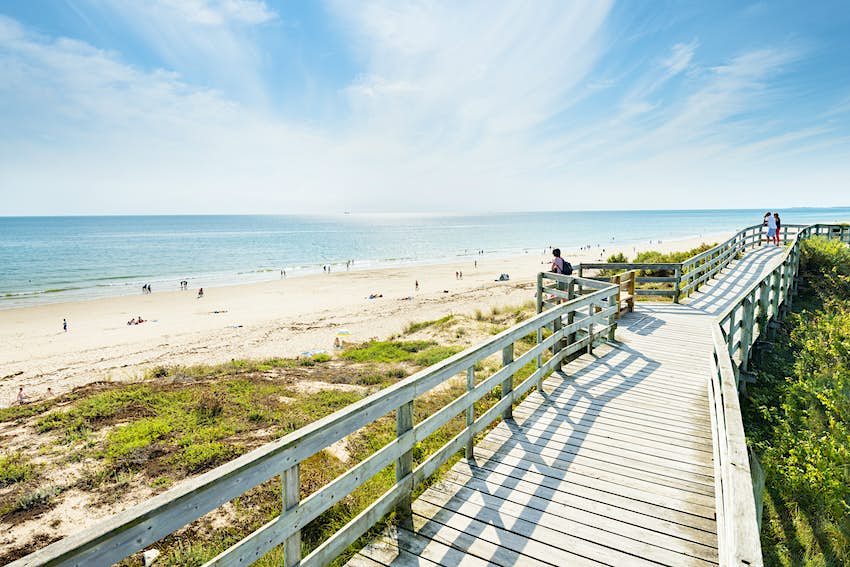 Come July and August, irresistible Ile de Ré is where you’ll find half of Paris on their holidays. With absurdly pretty villages, strips of uninterrupted golden fluffy sand and some freshly-caught (but farcically cheap) seafood, this tiny island is laid-back French seaside chic at its best.

Sun, sea, sand, salt and cycles are the five elements that work together to make Ile de Ré so appealing, and even during the annual Parisian invasion, you can still find quiet corners of this exquisite Atlantic outpost if you know where to rummage.

Here’s how first-timers can get started on Ile de Ré.

The first thing you’ll notice on Ile de Ré is that everyone is on a bicycle. As the island’s highest point is only 19 meters high and there’s a 100km network of excellent cycle paths, it makes sense to get around on two wheels. Every village has hire shops where you can find tandems, electric bikes, trailers for kids (or, just as often, for dogs) as well as the classic city bike with baskets for your market shopping.

All of the villages are connected by bike lanes, as are almost all of the beaches. Trails dip in and out of vineyards, glide past fields of wheat and poppies and duck through pine forests. One of the wilder landscapes is the nature reserve at Lilleau des Niges on the north-western end, with its salt pans, marshes and thousands of birds. Ile de Ré is only 30km by 5km, but it can take at least two hours to cycle from one end to another – worth bearing in mind if you’re with small children.

You might also like this: First time Paris: top tips for your first visit to the City of Light

Sandy beaches cover much of the island’s coast, which curls into a fishhook at its western end. And that’s where you want to go to avoid the summertime crowds.

The beaches on the southern side are closer to the main villages and, as a result, are more popular. However, outside of the main July-August holiday period (which starts to calm down from the third week of August), the dozen beaches that form an unbroken sandy chain around the island are surprisingly spacious.

Carry on to Les Portes-en-Ré for another collection of beaches, including the sheltered Plage du Trousse Chemise and Plage de la Patache.

Surfers should head to Plage de Gros Jonc near Le Bois Plage-en-Ré for gear rental and lessons. If you’re into kayaking, rent a canoe near the village of Loix for a lazy jaunt through the salt marshland.

If you love fresh seafood, it’s hard to think of a more satisfying way of spending an afternoon than trawling through the oyster shacks along the marshes at Ile de Ré’s western coast. The marshes teem with oysters and mussels, interspersed with salt pans where the island’s prized sea salt is still harvested by hand.

Many of the oyster producers offer tastings on the spot for quite unbelievably low prices - and the equally cheap takeaway costs will make you want to test your own shucking skills as well.

Look out for L'Escale du Marais (Route de Loix) near Le Bois-Plage-en-Ré, where you can sit by a rushing stream guzzling oysters and drinking local crisp white wine for the price of a large beer in Paris.

Protective 17th-century walls enclose the island’s alluring capital, St-Martin-de-Ré, where cafés and restaurants add a buzz to the pretty harbor. Away from the lively quayside, wander along the Vauban-designed citadel fortifications and onto the lighthouse and its surrounding parkland. Stop at the indoor food market, whose stalls are filled with fantastic local produce – seafood, cheeses, meats and tempting picnic snacks including deep-fried salt cod balls.

A 15-minute bike ride away is La Flotte, St-Martin’s charming smaller brother. Cafés line its dinky little harbor and the village’s sandy beach is a magnet for early-morning cockle pickers when the tide is out. La Flotte’s food market is pure enchantment, with stalls sheltering under medieval porticoes. If you’re on two wheels, carry on eastwards for 10 minutes to the atmospheric ruins of the 12th-century Abbaye des Châteliers, a somewhat eerie sight in this flat landscape.

Antiques hunters should head further west to Ars-en-Ré, which is full of bric-a-brac shops and art galleries. The village, officially one of the most beautiful in France, also has the largest harbor on the island and a sailing center. Even before you reach the outskirts, you’ll see the distinctive black-tipped white spire of the 15th-century church, which acted as a beacon for sailors before any lighthouses were built.

At Ile de Ré’s westernmost tip, the 59m-high Phare des Baleines lighthouse has been safely guiding ships around the island edge since it was built in 1854. Once you’ve wound your way up the 257 spiral steps – and it is a bit of a slog – your reward will be views that stretch right back to mainland France.

At its foot is the Musée des Baleines, which delves into the history of the lighthouse, and the Vieille Tour, a former lighthouse built in the 17th century that open to visitors during the summer.

This article was originally published August 2017 and last updated June 2021.