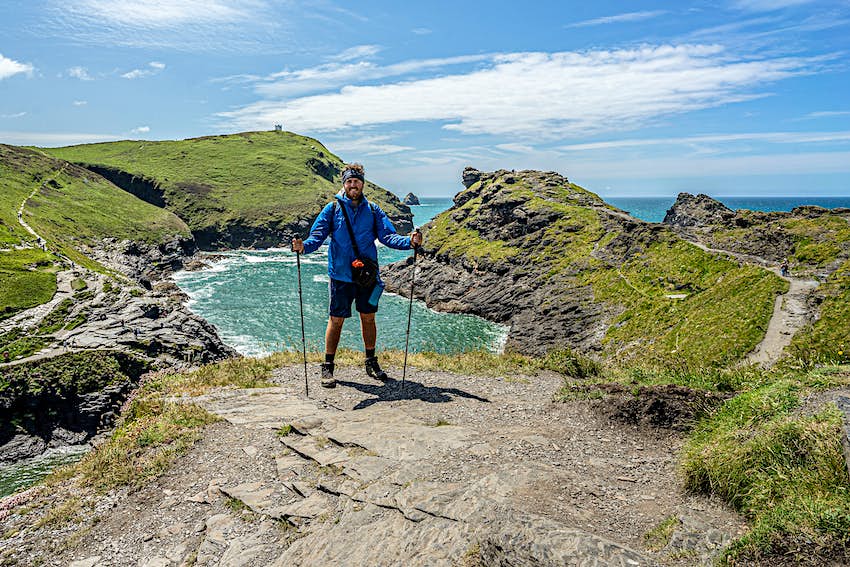 After a severe case of COVID-19, writer Richard Collett looked to a hiking route famous for its power to heal.

Land’s End was ahead of me. I could see the edge of the cliffs as mainland Britain abruptly disappeared into the crashing waves of the Atlantic Ocean, and I dragged my feet furiously over the last few hundred meters of gravel pathway to reach the most westerly point in Cornwall.

I was walking the South West Coast Path. At 630 miles (1013km) in length, it is the United Kingdom’s longest “National Trail,” a long-distance, waymarked hiking route that follows mile upon mile of dramatic coastline as it traverses the contours of Somerset, North Devon, Cornwall, South Devon and Dorset.

As Paul Harris, an ex-Royal Marine who has hiked the South West Coast Path, and who is now hiking around the entire coastline of the UK would later tell me: "The pain, savagery and relentlessness of the path will test you and push you mentally, physically and spiritually. I promise you though, you try by just taking that first step, and it will change your life.”

As I made my own journey around the South West Coast Path, I was battling through mental and physical demons brought on by a serious case of COVID-19 months earlier. At first, I struggled to even lift my pack onto my weakened shoulders. Every hill was a fight for my breath, my lungs and muscles burning. But this was the purpose of my journey: to test my body and mind after a debilitating virus, and to challenge myself physically and mentally by attempting to complete the longest hiking trail in the country.

Land’s End is located around 250 miles (400km) from the start (or end) point of the trail in Minehead, Somerset. It’s not even the halfway point, but as I reached the edge of Britain, my steps quickened. A sign advertised the “First and Last Gift and Refreshment House in England.” Flags fluttered in the Atlantic breeze as tourists took snaps next to a post that read “New York: 3147 miles.” In the distance, there was nothing but the vastness of the ocean.

It was the summer of 2021. Just six months earlier, I’d caught COVID-19. Despite being 30 years old with no underlying health conditions, I spent four breathless weeks in bed, barely able to summon the strength to walk the few meters to the bathroom. Every passing hour, I felt my mental fortitude draining as the physical strength left my body. Every night, I struggled to sleep, finally closing my eyes only to wake suddenly, gasping for breath, wondering how much further my blood oxygen levels might drop and when I might need to call an ambulance.

But with hospitals in the UK at breaking point, doctors told me to stay home and ride it out, and so I struggled through the worst of it, my mental health ebbing away while confined to a small room in Bristol. I’m eternally grateful that my partner Claire was there to nurse me through the worst of it. Despite suffering from COVID-19 symptoms herself, Claire somehow found the strength to cook meals and check my temperature. Without her assistance, there’s no chance I could have stayed out of the hospital.

I know that many others suffered much worse than me, but the virus still struck me harder than I’d imagined possible. In the months that followed, I was dismayed to discover that I struggled to walk the half mile to the supermarket, returning home wearied and fatigued in a way I’d never felt before the virus when I could comfortably run five miles around Bristol Harbor.

Then, in February, Claire handed me a copy of The Salt Path (2018) by Raynor Winn, saying it might inspire me to get outside again. She’d read it while I was suffering in bed, and found comfort in the journey taken by the author and her terminally ill husband as they walked the South West Coast Path after being made homeless.

“If they could do it, why couldn't we?” said Claire enthusiastically. With international borders closed, she was excited by the opportunity to return to her roots in South West England, and what better challenge to bring us out of our post-COVID haze than tackling an epic, long-distance hiking trail? We had no idea how far we could walk, but, inspired by The Salt Path, we spent two months that summer hiking relentlessly.

Finding community along the trail

Steve Kelcey began walking the path several years ago after losing a good friend to cancer, followed by the loss of another friend in a motorcycle accident. He initially walked a lengthy section from Penzance in Cornwall, to Minehead in Somerset.

Paul Harris, the former Royal Marine I spoke to, found himself down a “dark hole,” experiencing a panic attack in December 2019. Based in Dorset, Harris began walking sections of the South West Coast Path around his home as a way to escape a new job and a life he wasn’t enjoying.

In June 2020, he was inspired to not only walk the entire 630-miles of the South West Coast Path, but the entire coastline of Britain, a continuous journey that he is still undertaking today. “It saved me”, said Harris. “It’s nourished my soul, healed many wounds within me and I have met the most incredible humans walking the path”.

The South West Coast Path captures the imagination of so many because the scenery is so dramatic. But with drama comes difficulty. The terrain is rollercoaster-like, with long sections of the path rising steeply and then falling abruptly several hundred meters to the beaches below. The unpredictable topography changes every mile. Thick, forest-covered clifftops are sticky, humid and almost subtropical in summer. Emerge from the trees, and you might find yourself on barren moorland, where fierce gales sweep across the path as you struggle along rocky precipices. And it involves a whole lot of climbing. If you were to walk the full 630 miles, you would also ascend some 35,000 meters (114,000 feet). That’s four times the height of Mount Everest, and as we set off from Minehead, we quickly discovered how unprepared our COVID-fatigued bodies were for the challenge ahead.

England’s most beautiful castles: fall under the spell of these 8 exquisite fortifications

Despite training in the lead up to our departure date, our backs, shoulders and legs were unaccustomed to heavy packs and steep inclines. Our worldview narrowed to the few steps ahead of us. Every small brook or stream, every contour on the map, became a challenging obstacle that we willed ourselves to overcome.

We averaged less than 1 mile an hour over the course of the first week. To put this into perspective, the Ramblers, a charitable organization that encourages hiking in the UK, puts the average walking pace on outdoor trails at 2.5 miles per hour. Pre-COVID, we would both exceed this on long day hikes. But after the initial shock, our bodies and mind began to adjust to life on the path. We began to appreciate the high cliffs and the thundering waves below as we stumbled along the Somerset coastline, and over the steep hills into North Devon.

As the terrain leveled out, we found ourselves on the golden beaches of Cornwall, crossing estuaries dotted with sailing ships and fishing boats, strolling through old Cornish villages and savoring every sip of a cold pint of beer in the evening. We began measuring our days in hilltops and camping spots, taking delight in racing up trails to see the views that awaited us on the other side as we felt our muscles strengthening and our packs lightening. And with every step we took, we talked less about COVID-19 and more about our beautiful surroundings.

The 11 best beaches in the UK

Finding peace on a long walk

The South West Coast Path Association has recently completed a soon-to-be-released study that the association’s director, Julian Gray, describes as an “effort to better understand and value the mental health benefits of walking the South West Coast Path”. The study, Gray told me, shows that hiking and walking have a positive effect on our mental and bodily well-being.

As we reached Land’s End, we felt that hiking the South West Coast Path had not only allowed us to regain our pre-COVID levels of fitness, but to actually exceed it. We were now hiking above the average walking pace, and not just on flat land, but on uneven terrain with significant inclines for full days at a time. We appreciated the joy of being able to hike up hills again without struggling madly for breath. We felt more confident in our strength and fitness – and happier in mind.

The South West Coast Path Association believes that these benefits should be open to all, and Gray said they are pioneering a number of projects to make the path more accessible. This includes a Couch to Coast initiative that aims to get people excited about the outdoors by introducing them to small sections of the path. Other projects include collaborations with the Devon and Cornwall Refugee Service and Devon Mind, a mental health charity.

We never knew how far we would make it when we set off from Minehead. But everyone walks the South West Coast Path at their own pace. The fastest known time is 10 days, 15 hours and 18 minutes, a feat achieved by Damian Hall in 2016, but many more hikers tackle the path in stages, taking years, decades or even a lifetime.

We never made it to the end of the South West Coast Path that summer. Ours was a leisurely walk. A few weeks after reaching Land’s End, with the summer ebbing away, we called time at the official halfway point on The Lizard – a peninsula on the south coast that has the distinction of being the most southerly point in mainland Britain – safe in the knowledge that, for now, the path had served its purpose well.

Considering that, at the start of the year, I’d barely been able to walk a few meters without collapsing, a 315-mile hike was no bad effort. We discovered a new love for long-distance trekking, our bodies and minds felt re-energized, and we felt that we’d conquered the worst that COVID-19 had thrown at us. We’ve been returning when we can, to continue hiking the sections we missed, to stay fit, and to clear our heads. It might take years for us to cross the finish line in Poole, Dorset. We’re okay with that.

10 unique experiences in the UK

The best national parks in Greece for wildlife and wilderness

6 min read • Published in about 7 hours

2 min read • Published about 9 hours ago

Top things to do in Bend, Oregon from climbing volcanoes to surfing the river

5 min read • Published about 12 hours ago

The rules for Americans visiting Cuba in 2022

5 min read • Published about 12 hours ago