Take a hike, Dominica: the Caribbean's most adventurous island

To experience the real Dominica is to rub sweat from your brow, to have your favorite pair of hiking boots caked in mud, and to thoroughly understand how a cool breeze and few drops of rain can make an impossible hike suddenly bearable.

The Commonwealth of Dominica is a hilly, lush terrain that attracts avid adventure hikers from all over the world. The Nature Island’s trails range in difficulty, but every one presents challenges that are unique to its location and help explain why many Dominicans struggle to name their favorite.

Planning a visit to Dominica? Check out these trails:

It’s only when the breeze picks up and lifts the steamy shroud for a few moments that the three-hour trek up steep mountains and a rugged, jagged path becomes worth it. But to see the bluish-gray waters of the second largest boiling lake in the world, you’re going to work for it. Part of the blame for the difficult trail goes to Hurricane Maria and her 155 mile-per-hour winds that uprooted sections and completely changed the nature of the eight-mile, roughly six-hour hike. The other part is the Dominican terrain itself, the rocks, the steep climbs, the rushing river crossing. It’s a true adventurer's hike and not for the faint of heart. There are sections of the trail that will test your nerve, stamina and strength.

The Boiling Lake trail begins at Titou Gorge and meanders from Breakfast River and on to the Valley of Desolation, which can hit peaks as high as 3,168 feet. Being that high means the views are spectacular and will only get better as the dense rainforest heals itself following Hurricane Maria’s wrath. Along the way, through the Valley of Desolation, one will see boiling hot streams in black, gray and yellow colors due to the high concentration of sulphur in the area.

The Boiling Lake Trail is an advanced hike, so having a guide is highly recommended. There are portions of the trail, especially after Hurricane Maria that are unmarked. Among the most popular is Peter “The Bushman” Green who has been hiking up and down the mountainous range since 1992. His knowledge of wildlife, trees and herbs gives you a deeper appreciation of the surroundings. And if that doesn’t do it, perhaps the mud facial will. 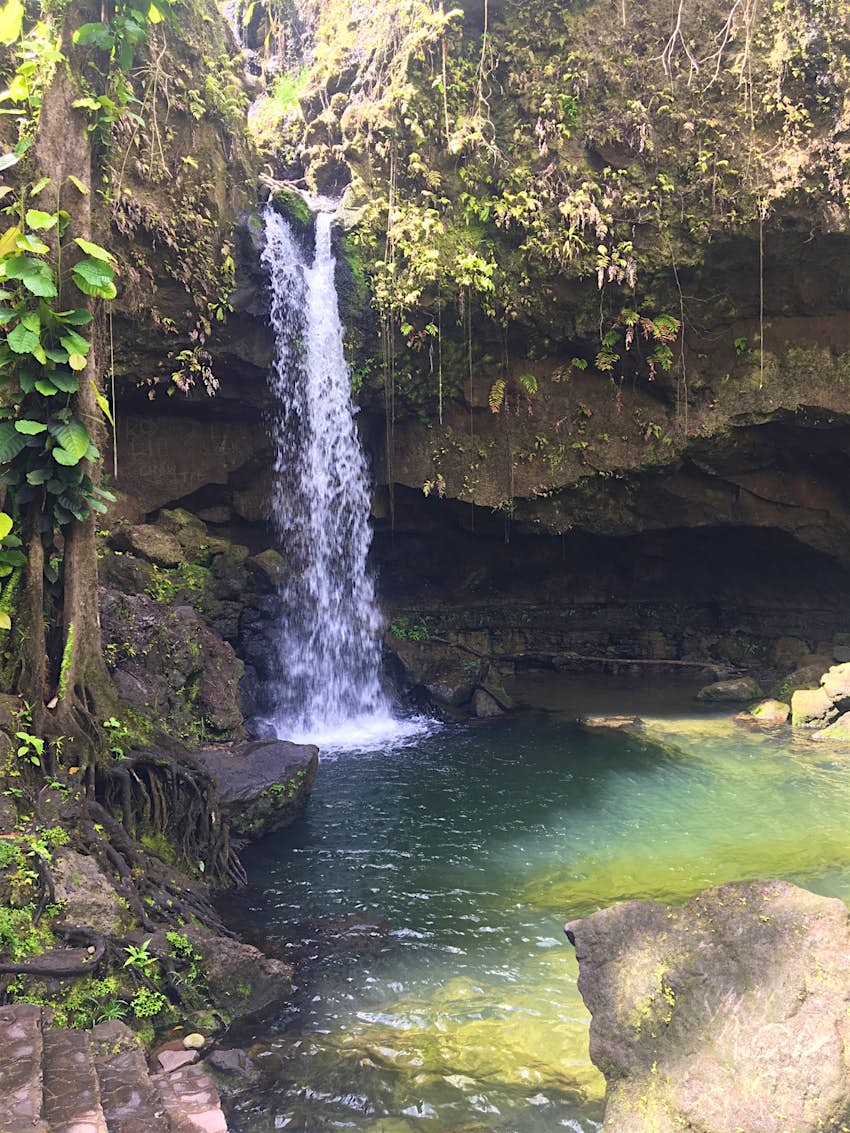 A short 0.75-mile walk from the visitor’s center at Morne Trois Pitons National Park leads to a grotto in the middle of the rainforest. The star of the show is the 40-foot waterfall that feeds into a green pond where visitors can take a crisp, refreshing dip. The area is filled with wildlife, so mind your step or where you toss your bag. Hikers can also access the Emerald Falls via Segment 5 of the The Waitukubuli National Trail (WNT), but that section has yet to reopen since the hurricane.

The WNT is the only long-distance trail in the Caribbean. It measures 115 miles and is divided into 14 segments. They take you from the southern part of the island in Scotts Head and extend all the way to the north, ending in Cabrits National Park.

Segment 13 of The WNT is nearly four miles and features a little bit of everything from a wooded forest to grassy knolls and, of course, mud. The estimated hiking time is approximately four hours and traverses through some really scenic sections of northern Dominica. You'll also pass by a few farms (say hello to the goats).

Signs for the trail or blue and yellow paint markers to signify the WNT are few and far between, so investing in a guide might be a good idea.

There are some steep climbs, but that’s just what you get in mountainous Dominica. There are a few spots along the way to have a break and enjoy the stunning greenery. Like all segments on the WNT, Segment 13 is expected to take a day.

Other popular trails in Dominica

Note: Due to Hurricane Maria, the hot-water pools along the track to the falls were covered and no longer accessible.

Middleham Falls Trail: Visually impressive hike that leads to Dominica’s highest waterfall (200 feet). The trail begins with a steep climb, but levels off into the rainforest. The approximately three-hour trek (round trip) can get slippery as the trail gets closer to the waterfall. Bring a bathing suit and cool off in the chilly waters.

Recovery continues in Dominica. For information on efforts to rebuild or clear many of the natural attractions, check out their voluntourism program.

Alicia Johnson travelled to Dominica with support from Discover Dominica. Lonely Planet contributors do not accept freebies in exchange for positive coverage.