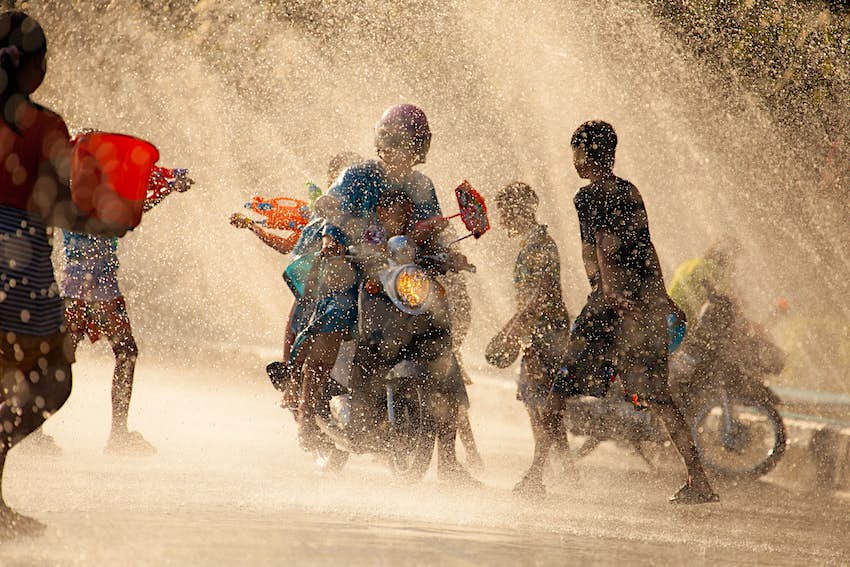 You’ve probably heard of Thailand’s infamous water festival, known locally as Songkran, when entire city streets transform into soggy, boozy battlegrounds. But the festival has its origins in something a lot more sober.

Songkran is a celebration of the Lunar New Year, the beginning of the Thai calendar, with the festivities officially spanning five days in mid- to late-April (this year’s celebrations take place from April 13 to April 17). With a nod to renewal, and in an effort to ensure an auspicious year, this is the time when Thais would traditionally cleanse Buddhist imagery at the local temple. As part of this ceremony, there’s also a tradition of sprinkling scented water on the hands of elders, a gesture of respect.

In recent decades, this rather pacific affair has somehow morphed into full-scale aquatic warfare, with fire hoses and Super Soakers, speakers blasting Thai country music, and rivers of beer, open-air raves, and indoor foam parties. Yes, the more subdued, traditional elements of the holiday still take place, but for visitors ⁠— and many Thais ⁠— Songkran can seem a lot like Spring Break.

This year, after a two-year pause due to the pandemic, Songkran is back – well, kind of. The green light has been given by the authorities to proceed with the celebrations, but with several caveats. Water fights and alcohol will not be permitted at this year’s public Songkran events, social distancing and masking may be enforced, and the government is encouraging people to focus on the more ‘traditional’ aspects of the holiday.

So what do you need to know about celebrating Songrak in Thailand? Here it is.

You haven’t done Songkran unless you….

…have walked back to your hotel soaking wet, generously smeared with baby powder and slightly buzzed in the middle of the day.

So how do you do Songkran in 2022, a year of no alcohol and water fights at public events? Be respectful and go with the flow of the celebrations.

April is the peak of Thailand’s hot season, so even that light sweater or windbreaker you wore on the plane will remain at the bottom of your bag.

The best time to travel to Thailand

April in Thailand is hot as Hades, and most years you’re likely going to be soaked and/or smeared with baby powder within seconds of walking outside, so follow the lead of the locals and adopt the Songkran uniform of swimming trunks, a t-shirt and flip-flops.

It’s worth noting that wearing revealing clothing is discouraged (the wearing of ‘spaghetti straps' is an annual source of condemnation and hand-wringing). Going shirtless in public is seen as disrespectful and save your swimsuit for the beach.

Everything you need to know before hitting Thailand’s temples, beaches and jungles

Don’t drive. Thailand’s already sky-high traffic fatality rate soars during Songkran often due to drunk driving, so as much as possible, it’s a good idea to stay off the roads.

Don’t plan on eating at a specific restaurant or shopping. During Songkran, businesses can close for as many as five days.

Do dress to get wet (well, maybe not this year). Nobody is exempt from being splashed, and the well-dressed and non-Thai are even more enticing targets. This year, the lack of water fights means you likely won't have to plan for a splash.

What should I do if I want to return with a story?

Although the wet, wild parties in Bangkok and Chiang Mai get all the press, those interested in Thai culture would be advised to seek out a provincial town in which to celebrate Songkran. (Not a bad idea in a year without water fights).

Upcountry, in Thailand’s small towns and villages, it’s much easier to gain access to the more traditional and religious side of the festival, which centers around family and the local Buddhist temple.

13 epic experiences to tick off in Thailand

Where is Songkran held and how do I get there?

Songkran is celebrated across the country, but Thailand’s major urban centers, Bangkok and Chiang Mai, are where you’ll find the most raucous parties.

In Bangkok, the most intense partying centers on Thanon Khao San (Khao San Road), the city’s backpacker strip. In the past, the street has been the epicenter of drunk, wet mayhem, although recent missives from government authorities suggest that things may be significantly subdued this year.

Another hotspot, especially for the city’s LGBTQ+ community, is Thanon Silom. In the past, the bars on this street hosted raucous foam parties, but this year, these are not allowed.

For something (slightly) more subdued and cultural, head north to Chiang Mai. You’ll still get splashed, but the festival’s religious origins are more apparent, with much more activity centered around the city’s numerous ancient Buddhist temples.

What is definitely a bad idea?

Even if you’d prefer to stay dry, during the five days of Songkran, it’s necessary to wear a smile and roll with it. Songkran is generally a relaxed event, but the mix of cultural misunderstandings, water and alcohol can lead to unpleasant altercations.

What are the current COVID-19 restrictions?

In the past, Super Soakers, buckets and even fire hoses have been the source of Songkran splashing. This year, the Thai authorities are urging people to keep things to “traditional water sprinkling,” although a clear definition of this has yet to be provided. What is clear is that large-scale water fights in public areas are not allowed.

Additionally, the government claims that social distancing and masking rules will be enforced during this year’s Songkran celebrations, and alcohol will not be allowed at the larger public celebrations.

Where should I stay? Is there a city that’s best to base myself in?

If you’ve come to party, then make Bangkok ⁠— especially in the areas near Thanon Khao San or Thanon Silom ⁠— your base.

If you’re interested in something more cultural, consider staying in Chiang Mai, where there’s more of an emphasis on the cultural and religious elements of the festival.

Is it ok to bring children?

Songkran’s water wars are a holiday seemingly invented by kids. In the past, some of the parties, such as those on Thanon Khao San, in Bangkok, are probably too boozy and raucous for families, but alcohol bans in 2022 mean that things should be a lot more subdued and kid-friendly.

What can I do after Songkran?

Post-Songkran is the perfect time to plant yourself on a beach and decompress.

I missed out on this year ⁠— how do I start planning for next year?

Buy a ticket and book hotels in advance. Songkran is one of the busiest times for travel in Thailand, and airline seats and hotel rooms sell out quickly.

We dare you to try to avoid this Sonkran song, played on a loop in virtually every 7-Eleven and at every celebration in the country.

You may also like:
Thailand's 3 best scenic journeys we know you're going to love
You won't believe the views on these 9 iconic Thailand hikes 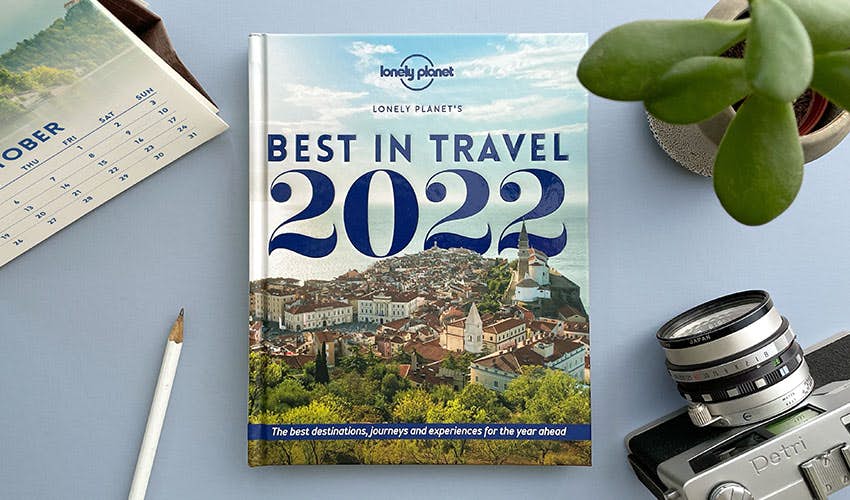