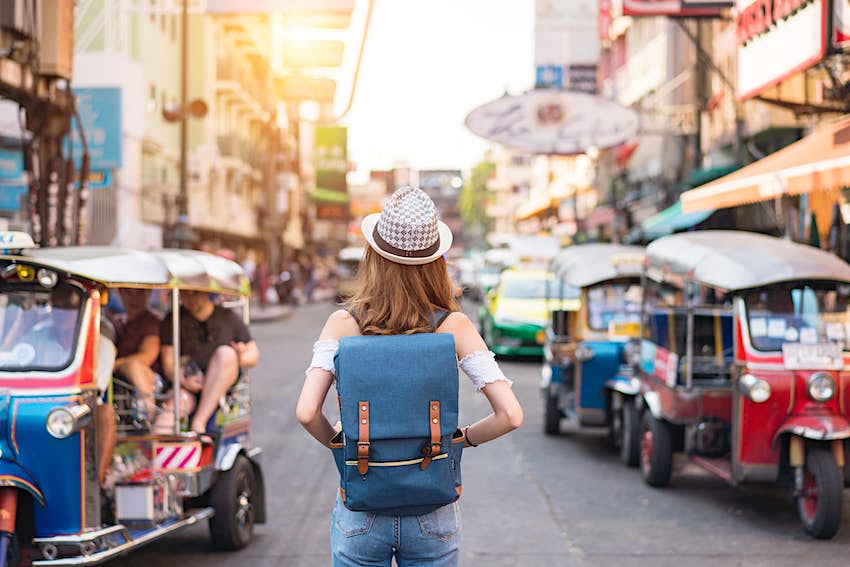 It’s undeniably one of travel’s greatest pleasures; wandering the streets of a whole new city, soaking up its character and exploring its hidden wonders on foot. When the pavement-pounding wanderlust cannot be satisfied in reality however, we’ve come up with the next best thing. Below are five of our Lonely Planet city walking routes, specially formatted so that you can enjoy them online. Simply load up Google Maps, switch to Street View, and start your virtual adventure…

Map view: This is the default view of Google Maps.
Street view: To activate Street View, grab and drag the orange figure icon in the bottom right hand corner of the screen, and release when it is hovering over your desired map point. From here you will be able to move along streets by moving the cursor and clicking in the direction you wish to travel.
Photo sphere: These are indicated by small blue dots that appear when you have clicked the orange figure icon. Drag and release onto the dots to get a 360° on-the-ground view of your surroundings.

This walking tour highlights Havana’s unique historical district, built up around four main squares. Start by dropping onto La Catedral de la Virgen María de la Concepción Inmaculada de La Habana, which anchors the Plaza de la Catedral, a complex square with bags of atmosphere and always awash with interesting characters (or, in this case, static images of them). Drop onto a photo sphere on the cathedral to look inside, return to map view and drop again onto the Plaza de la Catedral to explore.

Return to map view, and then drop onto one of the photo spheres on Plaza de Armas, once used for military exercises. The plaza is still guarded by the Castillo de la Real Fuerza, a beautiful 16th century star-shaped fort. Drop onto the castillo’s photo spheres to take a look around its perimeter. If you turn east, you’ll also be treated to a great view across Havana Port.

Just south of the castillo is Palacio de los Capitanes Generales, the former official residence of the city’s governors. Return to map view and drop onto one of the palacio’s photo spheres to take in the building, which is also home to the Museum of the City of Havana. Next, return to map view and drop onto a photo sphere along Calle Obispo, one of the city’s most bustling and lively streets. This is a great street to wander up and down. After returning to map view, drop onto the cluster of photo spheres on Plaza de San Francisco de Asis, a breezy open space watched over by the Iglesia y Monasterio de San Francisco de Asis. Finish your tour by dropping down at the photo sphere just north of the Terminal Sierra Maestra, and gazing out across the port.

Start this virtual tour through Split’s fascinating Old Town by dropping onto the photo sphere at the foot of the Bell Tower and Chapel of the Holy Arnir, once part of St Euphemia’s Church, containing an altar slab and sarcophagus carved by the early renaissance master Juraj Dalmatinac. Using street view, head southeast along Ul. Kralja Tomislava, until you reach the imposing statue of Grgur Ninski, whose toe is said to bring good luck when rubbed (clicked). Return to map view and drop onto the statue’s photo sphere to check it out. Using street view, head south from the statue to the Golden Gate, the grandest portal of Diocletian’s Palace, an ancient palace built for Roman Emperor Diocletian.

Return to map view and drop down somewhere along Narodni Trg, which has been Split’s main civic square since medieval times. Take some time using street view and its many photo spheres to explore. Although the square was once lined with Venetian Gothic buildings, only one remains, the 15th century Stara Gradska Vijećnica (Old Town Hall). Conclude your virtual tour by dropping onto the hall’s photo sphere and checking it out.

Central Melbourne is a warren of 19th-century arcades and gritty-turned-hip cobbled blue- stone laneways featuring street art, basement restaurants, boutiques and bars. Start your tour by dropping onto street view at Degraves Place, an archetypal Melbourne lane lined with interesting shops, cafes and street art. Head north from Degraves Place to Flinders Lane, return to map view and explore the nearby Centre Place, a bustling hub of cafes and bars, using its photo spheres. Return to map and drop back onto Flinders Lane, head west, and then make a right hand turn onto Elizabeth Street. Continue north until you reach the Block Arcade. Built in 1892 and featuring ornate plasterwork and mosaic floors, it’s based on Milan’s Galleria Vittorio Emanuele II arcade. Return to map view and drop onto one of the arcades photo spheres to take a look.

Return to map view, and drop onto Collins Street next to the town hall. Continue east along the street, and then turn right onto Russell Street. Continue south, and then turn left onto Flinders Lane. Continue east along the lane, and you’ll reach Duckboard Place on your right. Wander around using street view, taking in the plentiful urban art. Return to map view, and drop down to end the tour on Hosier Lane’s photo sphere, one of the city’s most epically decorated alleyways.

A mélange of historic buildings and skyscrapers, the center of Rio is an intriguing place to discover the essence of the city away from its beaches and mountains. Begin by dropping down onto a street view of the Praça Floriano, a scenic plaza set with several outdoor cafes. Navigate around at street level and take in the views. Proceed north along the Praça Floriano, until you reach the Municipal Theater of Rio de Janeiro, one of the city’s finest buildings, particularly after its $20 million renovation in 2009. Return to map view and drop onto a photo sphere facing the theatre to take in its grandeur.

Return to map view, and drop down onto street view of Largo de Carioca, a bustling area with a small market. Wander around using street view. Facing north, you will be able to see the Igreja São Francisco da Penitência, a 17th‐century church with a jaw‐dropping gilded interior perched up on a hill. Return to map view, and drop onto Rua de Carioca. Navigate west along the road, until you reach a right hand turn onto Praça Tiradentes. Continue north on Av Passos, turning right onto R. Luis de Camores. Along this road on the left you’ll find the Real Gabinete Português de Leitura (Royal Portuguese Reading Room), a historic reading room reminiscent of 19th century Portugal. Return to map view, and drop onto one of its photo spheres to explore the book-lined interior.

Return to map view, and drop down onto street view by Paço Imperial, once the seat of the Portuguese rulers in Brazil, the building today houses intriguing art exhibitions as well as several cafes. Spend some time exploring using street view. Navigate onto R. Primeiro de Marco, and work your way northwest, until you reach a righthand turn to Largo do Paço. Navigate east until you reach the Arco do Teles. Go through it, and you’ll finish your tour on Travessa do Comercio, one of the centro’s oldest and most charming lanes.

The bulk of Bangkok’s ‘must-see’ destinations are in and around the former royal district, Ko Ratanakosin. Start your virtual tour by dropping onto one of the many photo spheres at the Temple of the Emerald Buddha: Wat Phra Si Rattana Satsadaram / Wat Phra Kaew, a vast, fairytale compound that is one of Bangkok’s biggest tourist attractions and a pilgrimage destination for Bhuddists. Have a look around you using the multiple photo spheres on the site. Once you’re done, jump to the Grand Palace, the former resident of the Thai monarch (which is right next door), and do the same.

Continue north until you reach the Royal Hotel. Follow the road’s curve east onto Ratchadamnoen Klang Road, considered the Champs Elysees of Bangkok. Continue along it until you reach the 14 October 73 Memorial, commemorating the civilian demonstrators who were killed on 14 October 1973 by the military during a pro-democracy rally. Drop onto a photo sphere to look around. Continue in the same direction and you’ll reach the Democracy Monument on a roundabout, erected in 1932.

10 of the world’s coolest neighbourhoods

The best board games for travel lovers