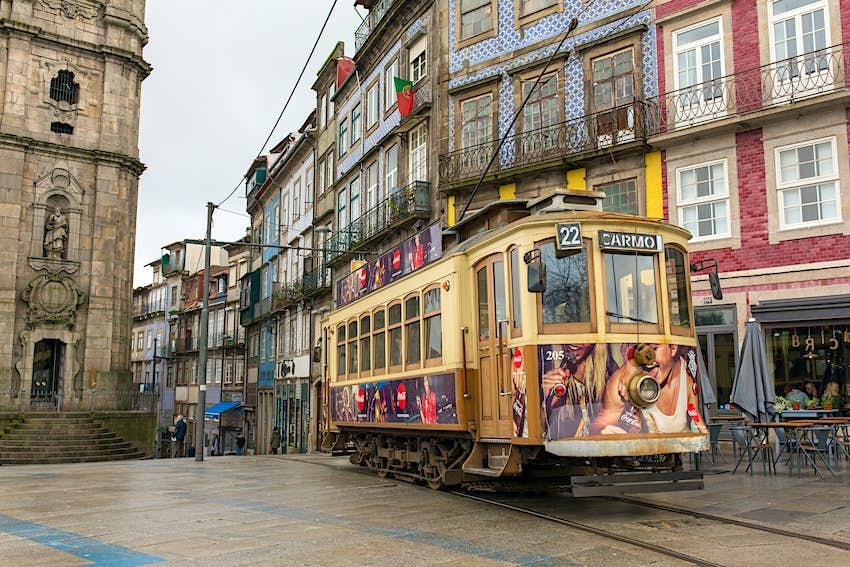 One of the best ways to get around Porto: in a vintage tram @ Mazur Travel / Shutterstock

Hills, bridges and the glittering expanse of the Douro River are all part of the scenic but sometimes challenging backdrop of Porto. Luckily, the city has an excellent transportation network for getting around, from a speedy metro system to old-fashioned trams, along with buses, taxis and even a funicular thrown in for good measure.

Porto has a compact city center, making it an ideal place for getting around on foot, particularly in the narrow lanes of the Ribeira where transport is lacking. For reaching far-flung corners of the city, you’ll have plenty of options to get you there. While generally efficient, Porto’s transportation network occasionally hits its snags, so give yourself ample time to get to where you’re going (and perhaps have a Plan B in mind if things go awry).

Strolling up the medieval alleys of the Ribeira district, you can hop on the metro and head up to the Casa da Música, Rem Koolhaas’ cutting-edge 2005 architectural masterpiece. Porto’s six lettered and color-coded metro lines offer many ways you can hop across centuries while exploring diverse corners of the city.

It’s good to familiarize yourself with some of the most useful lines. Line E (violet) travels from the airport to the city center, line D (yellow) has the nearest stop to the Ribeira (São Bento station) and travels over the Dom Luís I bridge to Vila Nova de Gaia. Line B (red) is Porto’s longest line, running from Estadio do Dragão (home to FC Porto) north to village-like settlements near the seaside. Trains operate from 6am to 1am daily.

Take in Porto’s best views aboard the teleférico de Gaia

It’s only a five-minute ride, but the teleférico de Gaia gives sweeping views over the Douro and the city beyond. The aerial cable car travels between the Vila Nova de Gaia waterfront and the southern end of the Dom Luís I bridge. It makes a good add-on to a day of port-tasting at the wine lodges in Vila Nova de Gaia. The upper station is just a few minutes’ walk from Jardim do Morro (above ground) metro station. The one-way fare is €6 (€9 return), and the teleférico runs from 10am to 8pm during the warmer months (service ends an hour or two earlier from late September to late April).

Get a better look at city neighborhoods on the bus

Porto’s extensive bus network can take you just about anywhere you want to go. You’ll also get to enjoy views of the city – architecture, plazas, long-legged dogs and their minders – generally not available if you take the metro. There are many lines that are particularly handy for sightseeing, including No 207, which takes you to the avant-garde Serralves cultural institution, stopping near the Soares dos Reis Museum, the Palácio de Cristal gardens, the Natural History Museum and other places of interest along the way.

Porto has an integrated bus and metro network, which you can use with ease by purchasing an Andante Card. There are various versions of the card. If you’re just planning a few trips while you’re in town, buy an Andante Blue Card (€0.60) and load it with credit. There’s also an Andante Tour Card – a better option if you plan to do a lot of traveling on the network over a short period of time: a 24-hour card costs €7 and a 3-day (72-hour) card is €15.

You can purchase cards at tourist information offices in the airport and in town, as well as at various metro stations. Note that the tram and funicular are not covered by the Andante Card.

Take a nostalgic ride on the Number 1 tram

Número Uno is the perfect digit for Porto’s cheerfully painted tram that trundles along the waterfront. The star of Porto’s transport network has been carrying passengers (as well as fish, coal, and other things) since the 1870s when it was initially pulled by mules. Though electrified nowadays, the tram only moves marginally faster than back then, providing a fascinating window into the past. The interior is kitted out with vintage wood paneling and oversized windows you can lift high to maximize those breezy views.

Tram No 1 runs between the Ribeira district and Passeio Alegre, which is about a 10-minute walk from the beaches of the Foz do Douro. You can purchase tickets (€3.50/6 one-way/return) from the driver. Two other trams circulate in the center. If you’re keen on riding them all, buy a two-day unlimited tram pass for €10 (€5 for children).

Porto has just one inclined rail line, but it’s well worth seeking out. The Funicular dos Guindais takes you from a street near the base of the Ponte Dom Luís I to Batalha-Guindais station near the Igreja de Santa Clara. The 25-passenger funicular takes three minutes to travel the 281m (922ft) and provides excellent views over Porto’s iconic steel bridge (designed by a student of Gustave Eiffel) as well as Vila Nova de Gaia’s port wine lodges across the river. The funicular is not part of the Andante pass (unless you purchase a monthly pass), so you’ll have to pay for a ride separately (€2.50).

Go green on an electric bike or scooter

Still in the early stages of development, Porto has plans to launch an electric bike- and e-scooter sharing program. The city will have 2100 modes of transport scattered at 210 different sites around the city. Several apps will provide access, including "Bird – Ride Electric" and "Circ – Enjoy the Ride".

To use the service, download the app, create an account, and scan the QR code of an available scooter or bike, and you’re all set. Proposed prices are €1 to unlock, then €0.15 per minute of use. A few guidelines to keep in mind: the transport isn’t available from 10pm to 6am, and users must travel in bike lanes rather than on sidewalks. Wearing a helmet is not obligatory, but is highly recommended.

Hop in a taxi or a ride-share late at night

You’ll find taxi ranks throughout the center, and you’ll also find ride-share services like Uber and Bolt. These are handy for late-night trips when there’s limited public transportation available. Count on paying around €6 to €8 for trips within the center during the day, with a 20% surcharge at night.

Travelers with mobility issues will find Porto to have a much more user-friendly transport network than Lisbon. Nearly all metro stations are fully accessible with ramps, elevators and dedicated spaces for wheelchair users onboard metro trains. You can find a map here. Parts in green are fully accessible. The majority of buses in Porto are also fully accessible with ramped access, low-level floors and a dedicated space for one wheelchair user on board. On the bus and on the metro announcements informing riders of the next stop are made. Unfortunately, the historic tram lines are not wheelchair accessible.

Climbing aboard the trams is like stepping into a time machine. You pass those vintage handles and wheels the conductor uses to operate the streetcar and the elegant polished wood details of the interior. Once seated (or quite possibly standing while holding onto a strap), you can listen to the meditative clackety clack of the wheels as you rumble through town.

The slow mode of travel and big windows give a cinematic view of the city in motion. Watch closely and you’ll get snapshots of Porto as you pass close by cafe tables where espresso drinkers are hunkered over newspapers or chatting with a neighbor passing by, while a server stands nearby watching the distant boats out on the river. The best time to travel is in the morning when you get an even more authentic glimpse of local life.

Lonely Planet’s Experience Portugal is your guide to unforgettable experiences and local surprises. Listen to authentic fado in Lisbon, explore the colourful palaces of Sintra, feast on the freshest seafood in the Algarve – all guided by local experts with fresh perspectives.