The best ways to get around in New Zealand: plan your travels with these top tips 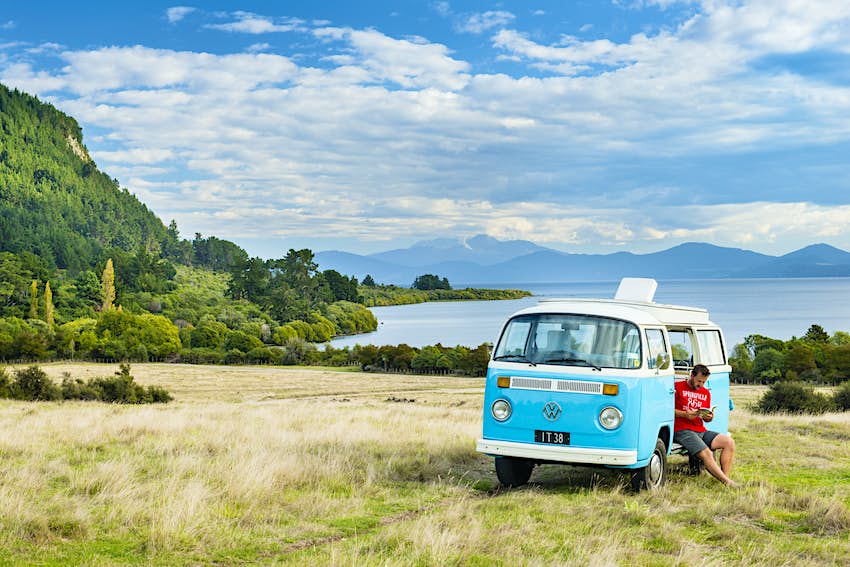 From hiring a camper to getting around in Auckland, here are top tips for travel in New Zealand © Justin Foulkes / Lonely Planet

New Zealand is a long, narrow and relatively sparsely-populated country. Outside the cities, there are gigantic expanses of rolling countryside, neck-craning mountains and acres on acres of native bush. In some regions, it can be a long way to the next town.

As a result, most New Zealanders tend to travel by car. Many visitors to the country do the same, although there are also some national public transportation options available. Regardless of whether you want to explore the cities or escape into nature, here are some of the best ways to get around New Zealand.

Scout new ways to explore the planet's wildest places with our weekly newsletter delivered to your inbox.

Driving is one of the best ways to see New Zealand

New Zealand's stunning scenery makes for remarkable road trips and traveling by car is convenient and flexible, especially for visiting attractions away from main arterial routes. Many of the best-known national parks are quite remote, so you'll need a car to explore them.

Driving around New Zealand is reasonably straightforward and traffic is relatively light outside of the major cities. People drive on the left-hand side of the road and visitors are usually allowed to drive on their home driver’s license for up to a year.

Keep in mind that car rentals aren’t always cheap, and insurance can be expensive for drivers under 25. If you’re traveling between the islands, also check whether your rental car is allowed on the Interislander ferry (which connects the North and the South Islands) – book your vehicle on the ferry in advance.

In more remote areas, there can be long stretches between gas stations, so be sure to fill up the car when leaving a town. Also, be aware that some roads are gravel or dirt, especially in rural places, with windy and narrow stretches and tight mountain passes. Distances are deceptive and being caught behind a slow-moving campervan on single-lane roads can add hours to your drive.

Tip for driving in winter: If driving through mountainous areas in winter, you'll need to rent tire chains or a 4WD vehicle to tackle the ice and snow on the roads.

Upgrade your rental to a camper for ultimate flexibility

Traveling by campervan gives you the flexibility of having your own transport while allowing you to save money on expensive accommodation costs. There are a number of camper rental companies in New Zealand offering full-sized and smaller vans, which are cheaper but not as comfortable.

Tip for traveling in a camper: "Freedom camping," or setting up camp outside of designated campgrounds, isn’t always legal – if in doubt, check the Department of Conservation website for some guidelines about where free camping is allowed.

City-to-city buses provide good links between cities and towns in New Zealand. These can be booked in advance and are reasonably affordable, however, local buses will need to be taken to rural locations or national parks.

Intercity is the best known of the national bus companies and their buses include wi-fi and sometimes toilets. Intercity buses also offer flexible passes which include ferry passes on the Interislander ferry. Discounted bus tickets are often available in the off-season.

There are also hop-on, hop-off buses that cater to tourists and backpackers, however, these are significantly more expensive. Buses are used to get around in the major city centers including Auckland, Wellington and Christchurch.

Trains in New Zealand are generally focused on freight and local travel within some of the cities, but there are a couple of scenic regional trains which are aimed at travelers.

The major route in the North Island is the Northern Explorer which goes from Auckland to Wellington, stopping in Hamilton, Tongariro National Park and Palmerston North. There is also the option to travel by train from Wellington to Palmerston North.

In the South Island, there are two scenic train options. The Coastal Pacific route follows the coast from Picton (where the Interislander ferry arrives from Wellington) to Christchurch and back again. The other option is perhaps the most beautiful train journey in the country. The Tranzalpine Train runs between Christchurch and Greymouth on the West Coast, passing through stunning alpine scenery.

Domestic flights are the quickest way to connect cities

While many visitors choose to travel overland in New Zealand, taking a plane will get you to other parts of the country in a shorter timeframe, but with a more significant impact on the enviroment. Air New Zealand is the national airline and goes to 25 different destinations around the country.

Tip for takine internal flights: Jetstar, a low-cost carrier, is another option, but it doesn't fly to all airports around New Zealand. If you book in advance, Air New Zealand’s special airfares are comparable with Jetstar’s pricing.

Most public transport in New Zealand is accessible for people of all abilities including buses and trains, which typically provide wheelchair ramps, handrails and low steps.

Many car rental companies offer accessible vehicles, but for specialist accessible rentals contact Disability Vehicle Rentals and Freedom Mobility. Mobility parking permits can also be arranged for international visitors if organized at the beginning of the trip.

Get a HOP card for easy travel around Auckland

If you’re spending some time in Auckland and planning to use public transit, it’s worth buying an Auckland Transport HOP card. These can be used on bus, train and ferry services in Auckland and give a discount on fares (excluding the SkyBus from the airport and the ferry to Waiheke Island).

HOP cards are prepaid and also provide an integrated fare. This means that you can transfer between Auckland Transport buses, trains and ferries and pay just one fare across the zones you’re traveling.

Lonely Planet’s New Zealand is our most comprehensive guide that covers all the country has to offer. Ideal for travelers that are visiting for an extended time and want to tailor their own trip. Hit the slopes in Queenstown, experience Maori culture and explore the Bay of Islands – all with your trusted travel companion.

8 min read • Published about 4 hours ago

7 min read • Published about 8 hours ago

8 min read • Published about 19 hours ago