Where to go on your first safari in Africa 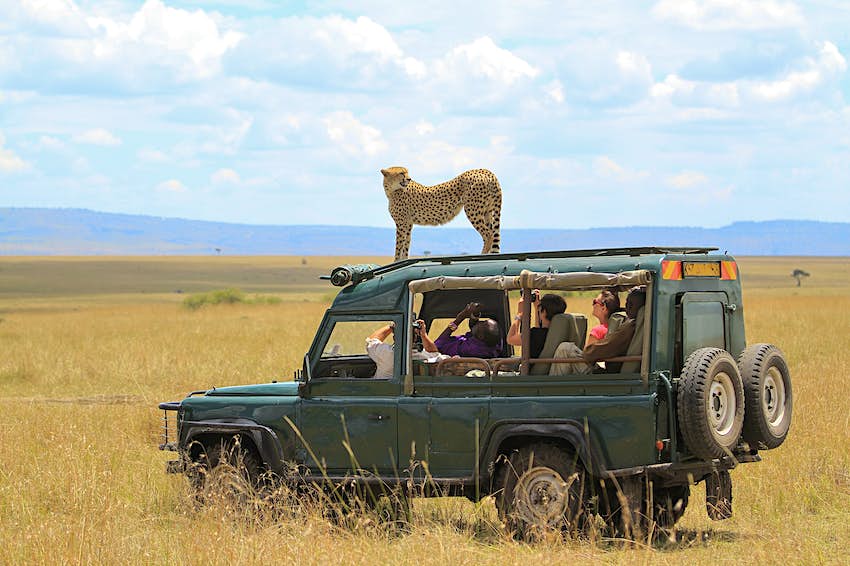 If you’ve never before been to Africa, you’ve so much to look forward to. But choosing where to go on your first safari can be quite daunting.

Which countries offer the easiest introduction to the continent for first-time travellers? Which countries are good for wildlife? We answer these questions and more in our country-by-country overview for your first safari.

Editor's note: travel restrictions may be in place due to COVID-19. Always check ahead and follow government health advice.

They’ve been doing safaris in Kenya since the very concept was invented, and safari actually means 'journey' in Swahili. Nowhere in Africa has a more professional safari industry than Kenya’s, and with that experience comes a rare combination of infrastructure and service. There are hundreds of excellent lodges and tented camps, standards of service from local staff are generally high, and they’ve mastered the logistics of moving between national parks for each leg of your safari itinerary.

Kenya’s wildlife offering is also outstanding. The main safari circuit takes in the Masai Mara, Amboseli and Lake Nakuru, with Tsavo West, Tsavo East and Samburu popular add-ons. Any combination of these parks should ensure ample sightings of big cats, plenty of elephants, a few rhinos, and all of the plains game, such as buffaloes, giraffes, zebras and all manner of gazelle and antelope species. Extend your stay by a week and you could even scale Mt Kenya, Africa’s second-highest peak.

Kenya has a downside, it’s Nairobi. Most travellers pass through without difficulty, but the city is a robust introduction to the continent with endless traffic snarls and questionable security in some quarters. Stay long enough to visit Nairobi National Park – an extraordinarily well-stocked park on the cusp of one of Africa’s largest cities – and then move on. And spend as little time as possible on Kenya’s roads, both because the combination of distance and traffic means you can take forever to arrive, and to minimise your risk of accidents. Flying from one park to the next makes better use of your time, although it does cost more.

Tanzania is similar to Kenya – fantastic wildlife parks across the country, an excellent safari industry – but its traffic is generally less stressful, prices are (for the most part) lower, and its mountain (Mt Kilimanjaro, Africa’s highest) is even higher. Tanzania’s northern safari circuit is a terrific introduction to the continent, including as it does the Serengeti, Ngorongoro Crater and Tarangire National Park, as well as Mt Kilimanjaro. A ten-day to two-week jaunt around the north is a fine way to fall in love with Africa, especially if you add some days on the island of Zanzibar.

While there are other world-class wildlife attractions – the chimps of Gombe and Mahale out west, or the southern wilderness parks of Selous and Ruaha – these are probably best left for those on a return visit: distances are vast, and the infrastructure is a little less developed.

South Africa can be a good introduction to the African safari, not least because it allows you to combine watching wildlife with more sedate pleasures, such as wineries and Cape Town urban cool. Many of the safari offerings are also priced for the domestic market, which makes them some of the best value options on the continent. Kruger National Park is a terrific place to get acquainted with Africa’s wildlife. The Big Five (lion, leopard, elephant, rhino and buffalo) are present in large numbers as are all manner of different mammal species, plus brilliant birdlife. The infrastructure is also excellent – the main roads are paved, there’s well-run accommodation across a range of budgets, and it’s very easy to get around. As for Kruger, so, too, for most of the rest of the country. South Africa’s safari operators, car rental companies and other service providers also rank among the most professional on the continent.

The only reason why many first-time travellers might hesitate before flying into Johannesburg is the country’s reputation for crime. Most visitors never encounter any difficulties, but there’s no denying security can be an issue in South Africa, particularly in urban areas. If you stick to South Africa’s parks and abundant private reserves, you’ll greatly reduce your risk of experiencing any problems.

Often marketed as ‘Africa for Beginners’, Namibia is a fine choice for your first African journey. Like South Africa, many prices are aimed at the domestic (and South African) market, which makes them good value. For wildlife, Etosha National Park is simply wonderful and has excellent infrastructure, while the intimacy of wildlife-rich private reserves such as Okonjima and Erindi are ideal for first timers. Elsewhere, wildlife is pretty difficult to track down, but you could combine wildlife with other attractions – the shipwrecks and seal colonies along the Skeleton Coast, time spent with the Himba in the country’s north, and the sand dunes of Sossusvlei. If you’ve the time, it’s a long drive south to Fish River Canyon, which might not have much wildlife but remains one of the continent’s most dramatic hiking destinations.

Beyond these major attractions, most of which are accessible along the country’s well-maintained network of paved roads, some of Namibia’s other major attractions, such as Damaraland with its stirring mountains and desert-adapted elephants, consist of pretty rugged country that’s probably best left to more experienced Africa hands. If money is no object, you can easily fly into luxury camps in some of the country’s most beautiful and more remote corners. Getting there is far more difficult if you’re on a more modest budget.

Botswana is one of Africa’s premier wildlife-watching destinations. The wildlife is prolific and extraordinary and the landscapes – the Kalahari, the Okavango Delta, the salt pans of Makgadikgadi – are likewise. As one of the wealthiest countries in sub-Saharan Africa and with one of the lowest population densities on the planet, diamond-rich Botswana is a pleasure to travel in, with empty roads, very few large cities and a highly accomplished safari industry.

But Botswana’s appeal comes with a caveat, and it comes down to cost. Keen to avoid the pitfalls of mass tourism, Botswana’s government aims high, putting an emphasis on low-volume, high-cost safari experiences. You could rent a 4WD vehicle and go camping, but the price of doing so will still be out of reach for many budget and even midrange travellers.

Victoria Falls, which is accessible from both Zambia and Zimbabwe, should be on everyone’s bucket list of African experiences. Provided you fly in and fly out, national parks such as South Luangwa (Zambia) and Hwange (Zimbabwe) are world-class for wildlife, although the cost of doing so can be prohibitive. But if you’re travelling by more traditional means and your budget does not extend to luxury camps and aeroplane transfers, the large distance between attractions in both countries make this a less-than-ideal choice for first timers. The potential for political instability and corruption in Zimbabwe is another potential turn-off. And a big part of these countries’ safari appeal – guided walking safaris (in Zambia) and even unguided ones (Mana Pools National Park in Zimbabwe) – are probably best left to those with more experience of the African wild.

Zimbabwe’s rising star
Travelling to Africa with my young daughters: a father’s story
Why seeing chimpanzees is one of the world's greatest wildlife experiences

An alternative safari in Southern Africa

This article was first published October 2019 and last updated December 2020.

Get more travel inspiration, tips and exclusive offers sent straight to your inbox with our weekly newsletter. Make sure you're ready for anything with travel insurance from our trusted partners.

5 min read • Published about 10 hours ago

8 min read • Published about 11 hours ago

7 min read • Published about 13 hours ago