Get off the beaten path in Bristol for English history, culture and cutting-edge food 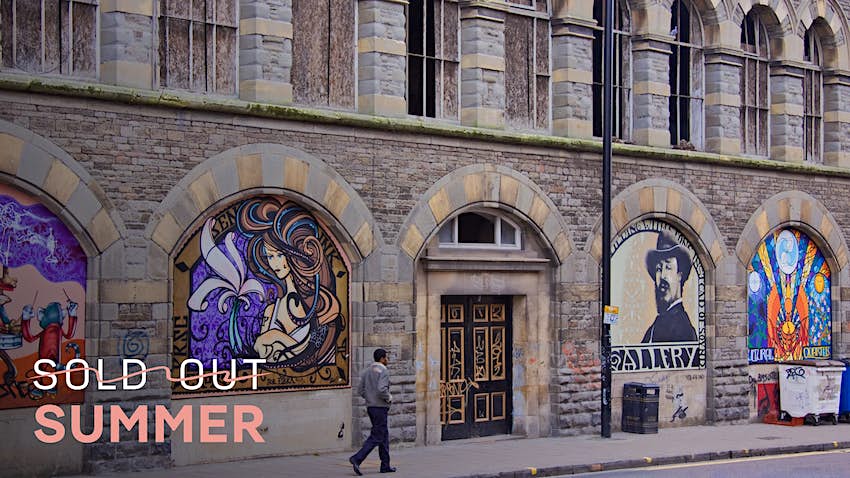 Festooned with iconic architecture and fizzing with creative anarchy, the historic port city of Bristol is the perfect alternative to London © Image by pjhpix / Shutterstock; Graphics by Jacob Rhoades / Lonely Planet

Has London sold out this summer? Or has its outrageous dynamic pricing (£4000 Bruce Springsteen tickets, anyone?), face-melting entry fees at Madame Tussauds, and – gulp – £8 pints squeezed your budget like a zit? Don’t pop! We have an alternative: the alternative’s alternative, Bristol, less than two hours away from London by train.

Festooned with iconic architecture and fizzing with creative anarchy, this historic port city is closer to Cardiff than London by distance (25 miles as the crow flies). It features 12th-century churches and ritzy waterside developments, has the potential to dethrone the status quo (the Green Party has its most seats ever in both Bristol City Council and the Welsh Parliament, Senedd Cymru) – and it is the ideal backup for when the Big Smoke has restricted room.

Scored by the River Avon and scrawled in vibrant street art, Bristol has been home to the engineering giant Isambard Kingdom Brunel, notorious nautical naughty-boy Blackbeard, and now the greatest graffiti artist of this generation – Banksy. Awash with ethical integrity, bin-shaking bass music and oh-we-must-go-again restaurants, “Brizzle” is still taking bookings for 2022. Here’s what to do in a city that rarely sells out.

Forgo Tower Bridge and cross the Clifton Suspension Bridge instead

There are plenty of ways to interact with Bristol’s most iconic sight, the Clifton Suspension Bridge – cross it by bicycle/Birkenstock/e-scooter/car (£1) – but for the complete, blow-you-away experience, visitors should fawn over Isambard Kingdom Brunel’s maiden engineering project from Observatory Hill.

At just 24 years old, the Victorian engineering wunderkind was commissioned to design this 414m-long, gorge-spanning link some 76m above the River Avon, which was to become the world’s highest and longest bridge at the time.

Brunel’s initial plans for pylon-style towers, Egyptian sphinxes and decorative cast-iron panels fell foul to money woes, contractor bankruptcies and other misfortunes, but the engineers William Henry Barlow and John Hawkshaw completed the crossing as a fitting “farewell” to the most extraordinary construction mind of the age. The bridge is now to Southwest England what the Opera House is to Sydney: a big, bold, ambitious architectural statement – for photographers and postcard sellers at least.

Cutty Sark sold out? Climb the rigging of the SS Great Britain

Not that Brunel’s legacy can’t be traced elsewhere in Bristol. The revolutionary, five-foot-tall engineer – who often sported an eight-inch-high top hat – wasn’t only keen on building gigantic bridges; he loved boats too. Permanently moored in the Great Western Dockyard is another of his engineering marvels: SS Great Britain.

Launched in 1843, this handsome, iron-hulled hulk was the world’s largest passenger ship when it was built. It made waves at the time for ditching the paddle wheel and instead plying the Bristol to New York City route using a propeller. Today it floats in a glass “sea” – spoiler: it’s a dry dock – where visitors can geek out at the ship’s working bits underwater. There’s enough to keep you entertained here for hours. It’s worth paying extra to climb the rigging.

Miss out on the Museum of London? Head to M Shed instead

This former wharf-side warehouse turned free museum charts Bristol’s history and cultural significance across the last two millennia – making a mockery of most other municipal menageries in the process. From its gray Stothert & Pitt cranes that still stalk the City Docks like herons, to figurines from the much-loved TV animation Wallace & Gromit, the M Shed has so much going on that Brunel once said he’d eat his hat if you ever get bored.

The institution doesn’t shy away from the darker aspects of Bristol’s past either, amplifying stories like the Bristol Bus Boycott (a protest against a racist policy that stopped non-white people from working on the buses in 1955) and the city’s role in the transatlantic trade of enslaved Africans. M Shed was where the statue of Edward Colston, a wealthy trader of enslaved people with links to the city, temporarily went on display after protestors pulled it from its plinth in 2020 and dumped it into the Bristol Harbor.

Colston’s statue isn’t the only thing to be razed into the waves – Nazi bombs did a decent job of wiping out the Great Western Railway warehouses that once backed onto the River Avon. Since 2013, developers have built some fancy facsimile replacements as houses, shops and offices, creating Bristol’s latest neighborhood, Wapping Wharf. Construction work is still going on, but the east of Spike Island is now becoming a munchie’s magnet thanks to CARGO – a corral of independent shipping-container restaurants stacked like LEGO.

If you need a bite to eat, try Squeezed, which sells freshly made, award-winning burgers as tall as skyscrapers. Thick slabs of beef, slow-melted cheese, softly sautéed shallots and a drenching of delicious aioli leave every diner mucky-fingered. No wonder they sell out early. If that happens, sister restaurant Dog Town flogs loaded hotdogs that tie the knot with slushies and shakes like some sort of street food shotgun wedding. But be warned, their jerk-nori salted skin-on fries can lead to epiphanies like: “Why haven’t I had these before?” “How much are houses in Bristol?” “Can I kidnap the chef?”

While we don’t recommend chef-napping, we can suggest skipping up to Stokes Croft, a radical stretch of tarmac ribboning north from the Bearpit roundabout. Throbbing with Bristolian rebellion, heavy reggae sound systems and some of the UK’s best street art – find Banksy’s Mild Mild West at number 80, a teddy bear lobbing a Molotov cocktail at riot police – the ideas and ideals of this staunch, anti-homogeneity haven spill out liberally across the ‘hoods of Kingsdown and St Pauls.

Stokes Croft is what makes Bristol, Bristol. For a taster, check out the fine English bone china for sale at The People’s Republic of Stokes Croft (like the mugs featuring the Queen’s face and the words: “I Eat Swans”), take in a £1 film or live music with a homemade Coca-Cola at The Cube, and mop up Ethiopian tibs (a tender beef stew in a rich, spicy tomato sauce with injera, a thick, sour-fermented flatbread) at the Real Habesha Restaurant or a box of slow-cooked Caribbean curried goat and rice from Bikkle Island. Both are on Stapleton Road.

Every corner is a canvas in Bristol. Every building is a potential portrait spot. The guerilla graffiti king Banksy is undoubtedly the street art star to spot with hometown masterpieces that include Well Hung Lover on Park Street, depicting a naked adulterer clinging precariously to a window frame and The Girl with the Pierced Eardrum – a playful spray-up of Johannes Vermeer’s Girl with a Pearl Earring except with a security alarm for an earring. Since the pandemic, she now sports a facemask too.

But don’t feel you have to do all the hard graft finding the best work. Bristol Street Art Tours offers a two-hour crawl around Stokes Croft, giving any budding Banksy the chance to leave their mark too.

Spend your money along Gloucester Road, not Oxford Street

Once the longest stretch of independent businesses in Europe – until supermarket chain Sainsbury’s and coffee shop franchise Costa moved in – Gloucester Road is where to splash your souvenir savings. Start at That Thing (officially on Cheltenham Road but part of the same street), which sells sequin-covered festival wear, before sniffing out Fox + Feather for fashionable clothes and homewares.