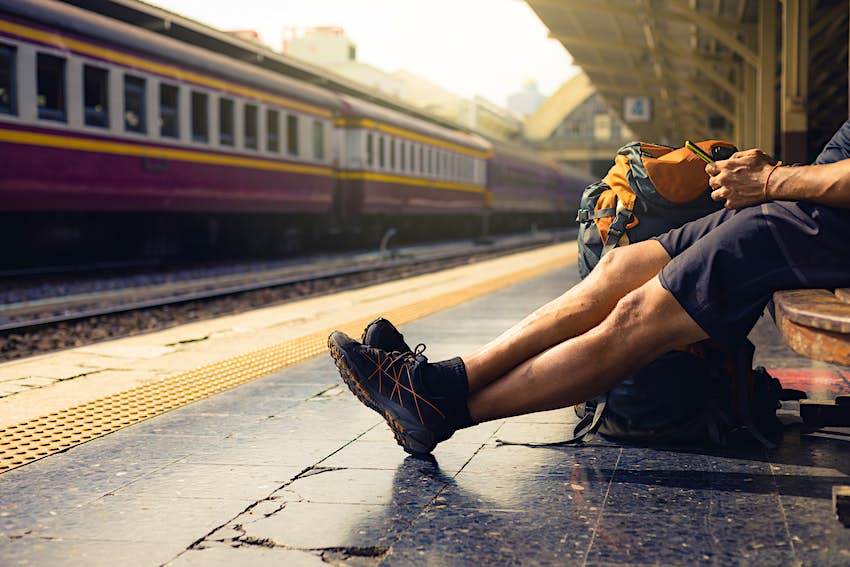 It's been over a century since Thailand’s first train line – a scant 50 miles linking Bangkok and the former royal capital of Ayuthaya – was completed. Tracks have since been extended to most of the country and whilst train travel has almost entirely been superseded by bus and air, scenic railway routes and sleeper trains remain one of the best ways to see the country.

For now, Thailand’s rolling stock isn’t that advanced, but trains run by the State Railways of Thailand (SRT) are generally on time, comfortable and charming in a stuck-in-time type of way.

If you’re not in a rush, trains also offer good leg room (particularly in sleeper cars); great Thai food (either from the dining car or from vendors selling snacks between stations); gorgeous views; antique train stations; and quirky experiences (like as the route that appears to crash into a fresh market). Here are the six best train journeys in Thailand.

One of the best train rides in Thailand is this short, workaday, commuter line. It begins near Bangkok and famously terminates smack dab in the middle of a wet market.

Start at Thonburi’s Wongwian Yai train station, just across the Chao Phraya River from Bangkok, where hourly trains go to Samut Sakhon (known by locals as Mahachai). From the window you can peek into homes, temples and shops built an arm’s length from the passing trains. Further on, palm trees, patchwork rice fields and marshes filled with giant elephant ear perennials and canna lilies line the route, punctuated by whistle-stop stations.

The farms evaporate as you enter Samut Sakhon. After disembarking and walking through one of the most hectic fresh markets in the country, you’ll reach a harbour clogged with water hyacinths and wooden fishing boats.

Take the ferry across to Baan Laem, where you'll board yet another train, this time for  Samut Songkhram. You’ll emerge directly into a hubbub of hectic market stalls. Between train arrivals and departures these stalls are set up directly on the tracks and must be hurriedly cleared away when the train arrives. It’s an amazing scene.

Built during the WWII Japanese occupation of Thailand, the so-called Death Railway is Thailand’s most famous – and historic – train line. Construction began in October 1942, by Allied prisoners of war (POWs) and conscripted workers armed only with basic tools and dynamite. Well over 12,000 POWs and as many as 90,000 recruited and forced labourers died due to disease, poor hygiene, lack of medical equipment and brutal treatment by camp guards. The deadliest section of railway construction was an immense rock cutting dubbed “Hellfire Pass” because of the eerie glow of torches seen when working at night.

Given the rugged territory it passes through, this is undoubtedly the most scenic train trip in Thailand. A total of 688 bridges were built along the route; the bridge that spans the “River Kwai” near Kanchanaburi city (now referred to as the Death Railway Bridge) was at the time the only steel bridge built in Thailand.

The trains that run the Death Railway are 3rd class, meaning they have no air-con and mostly wooden benches (sit on the left-hand side for the best views). It’s a tourist line today, so there are stops for short visits to historical sights and a cave.

The route is a great chance to try one of Thailand’s sleeper trains. They depart Bangkok starting in the afternoon, which means the majority of the journey is at night. In the morning, you’ll wake up to beautiful glimpses of the northern Thai countryside. In particular, keep your eyes peeled as the train cuts through tunnels and rugged forest of Doi Khun Tan National Park, just south of Chiang Mai (another fascinating sight is watching railway staff unfold and make the sleeper beds).

If you book a more expensive ticket, you’re likely to travel on one of the SRT’s shiny new trains. Likewise, purchase your tickets as far in advance as you can; this particular route is popular with tourists, especially backpackers.

This route skirts around the Gulf of Thailand and although sea views are rare, in Phetchaburi and Prachuap Khiri Khan Provinces, there’s some beautiful scenery including salt flats and seemingly never-ending coconut plantations. Your destination, Hua Hin, is Thailand’s original beach escape, with a history that dates back to the 19th century.

The highlight of the route is Hua Hin’s train station. Arguably the most beautiful train terminus in Thailand, this red-and-white icon was built in 1926 with a Victorian gingerbread design boasting lots of carved wood pillars and trim. Because Hua Hin owes its prosperity to the train, the station is a major source of pride and you'll find imitations of its design all over town.

Departing from Bangkok in the afternoon, this lauded international route crosses the Mekong River into Laos and is a great opportunity to try out Thailand’s overnight sleeper trains. In the morning, with warm sunlight streaming into your bed, you’ll pass by the tiny villages and seemingly endless rice fields that make up Thailand’s rural northeast.

After a stop in Nong Khai, you’ll cross the so-called Friendship Bridge to Laos. The 15-minute ride drops you in Thanaleng (aka Dongphasay) station, meaning that you’ll need to take a taxi or tuk-tuk the remaining 10 miles to the capital, Vientiane.

A high-speed train linking these two destinations is in the works, but delays in construction mean that it’s completion has been pushed back to 2030.

Finding the SRT dining car menu a bit lacking? Then consider a trip on the ultra-luxury Eastern & Oriental Express, a privately-operated train that links Bangkok and Singapore. Outfitted to recall the golden era of train travel, passengers on the three-night, four-day journey reside in sumptuous private cabins, although they may also find themselves spending much of their time in the Observation, Dining and Bar Cars.

The journey is all-inclusive, and non-train activities include tours and excursions in Thailand and Malaysia. The E&O runs between Bangkok and Singapore twice a month.

You might also like:
13 epic experiences to tick off in Thailand
​​Tourists return to Thailand as Phuket reopens to vaccinated travelers
How to travel responsibly in Chiang Mai