The best time to visit Seattle to avoid the rain (maybe) 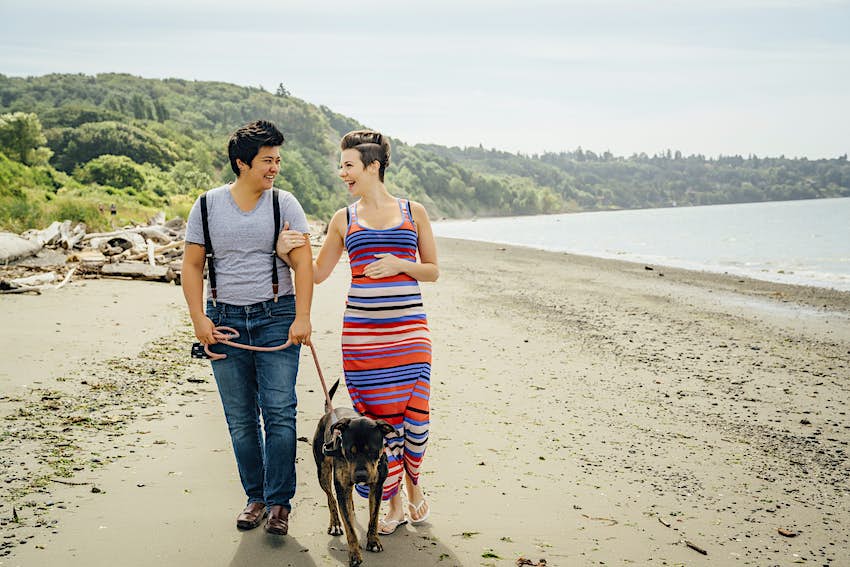 Seattle: a city of hippies and hipsters, hi-tech and nature, craft beer and coffee, and rain. Lots and lots of rain. Or is it?

Yes, Seattle gets more rainy days than most other cities in the United States, but it’s actually drier than, say, New York or Miami.

When to visit depends on what you want to do in Seattle. If you want to explore the parks and gardens that gave the Emerald City its name or catch incredible views from the Space Needle, you’ll want sunny skies – which come with crowds of tourists.  If you'd rather pay less for accommodation and avoid the crowds in the low season, you'll also need an umbrella.

Despite the association with inclement weather, Seattle has something for every type of traveler, whatever time of year you decide to visit. Whether you're looking to explore iconic architecture or dive into a thriving craft beer scene, here's our guide on when to visit Seattle.

Spring and fall see lower temperatures than the short summer and fewer crowds while still escaping the heavy rain showers of winter.

Budget travelers can find good deals on accommodation and car rental rates at this time. Even during the shoulder season, the best time to drive through Seattle is between 9am and 4:30pm and later between 7pm and 6:30am to avoid rush hour.

September has one of the highlights of the cultural calendar: Bumbershoot, a multi-day arts festival that began in the 1970s. There’s always the chance of a late summer early in October before the city gears up for Halloween.

Average highs are in the 50s and 60s (Fahrenheit) during the spring and fall, so you’ll want to bring a warm layer for the evenings. Rainfall is characteristically a persistent yet light drizzle rather than a deluge, and more than half of these months are completely dry days. Still, an umbrella is a sensible precaution.

Although blistering sunny weather is infrequent in Seattle, overcast but not rainy days are not unusual. The record number of consecutive dry days is 55, set in 2017. Your best chance for a clear forecast falls between June and September.

With better weather comes more crowds. However, the high season sees peak demand for flights and transport and peak hotel prices. Expect crowds at famous Seattle sights like Pike Place Market and the Museum of Pop Culture. The best time to visit the Seattle Space Needle is on clearer days, either early in the morning before the crowds arrive or at sunset, so you can get daytime and nighttime views in one visit.

However, this is also the best time to get outdoors and into the city’s pine-filled parks, or you can get serious about visiting the islands and waterways of Puget Sound, with whales and orcas passing through starting in May and lasting through October.

Travelers willing to brave the cold, dark and dank days of winter will find tremendous discounts and the chance to enjoy many of Seattle's top attractions almost entirely to themselves. Indoor venues such as theaters and music venues come into their own during the low season; the soggy weather is partly responsible for Seattle’s famously creative music scene and its vibrant coffee shop culture. And a snow adventure is just a day trip away.

January is excellent for skiing

The year starts with a hangover and occasional flurries of snow. Plan indoor activities, or bring your skis and head to the nearby mountains. Of all the months in the year,  January historically sees the most discounted prices on plane tickets.

February is perfect for budget travelers

Dark, dreary days and occasional bouts of genuine cold keep most in figurative hibernation. Scour the internet for hotel deals and book a night at the theater.

The odd warm day can see restaurants opening up their patios, but more often than not, the rain persists. Saint Patrick’s Day provides a good excuse to shrug off the long, hard winter.

Avoid the crowds in April

This is usually the month where you’ll find the center of the “nice weather” and “cheaper hotel rates” Venn diagram. It’s not always sunny, but there are plenty of stunning days.

May means fun on the water

People start hitting the waterside attractions in May. Visit before Memorial Day (last Monday in May) – this could be your last chance for an affordable hotel rate for a while.

Showers can linger in early June, but summer’s on the way. When the temperatures rise, you can feel the city loosen up and sigh contentedly. It’s also Pride month, and celebrations are abundant in Seattle.

July is warm but expensive

Higher temperatures and prices mark Seattle’s peak season; you’d be wise to book ahead for pretty much everything.

Head to street fairs and the beach in August

The best time to visit Seattle for whale watching? Possibly. Once Bumbershoot’s over, the tourists go home, and hotel prices deflate. But the weather usually remains sunny and relatively warm until early October, making this the perfect time for spotting whales without the crowds.

Grab a deal in October

There’s always the possibility of a late summer in the first half of the month, while the start of the shoulder season brings lower prices. The best time to visit Seattle in the fall comes as the clouds roll in and people get out to celebrate Halloween.

November is the start of the low season

November can be a dismal month for weather. Don’t let anyone convince you that this is the worst time to visit Seattle, though. Most sights stay open, and, with the low season kicking in, some hotels slash their prices to half summer rates.

Return to the slopes in December

Seattle’s surrounding ski resorts open up, making the city an ideal urban base for snow-related activities. Hotel prices continue to drop along with the temperatures.

6 min read • Published about 2 hours ago

6 min read • Published about 2 hours ago

9 min read • Published about 7 hours ago