Top things to do in Amsterdam 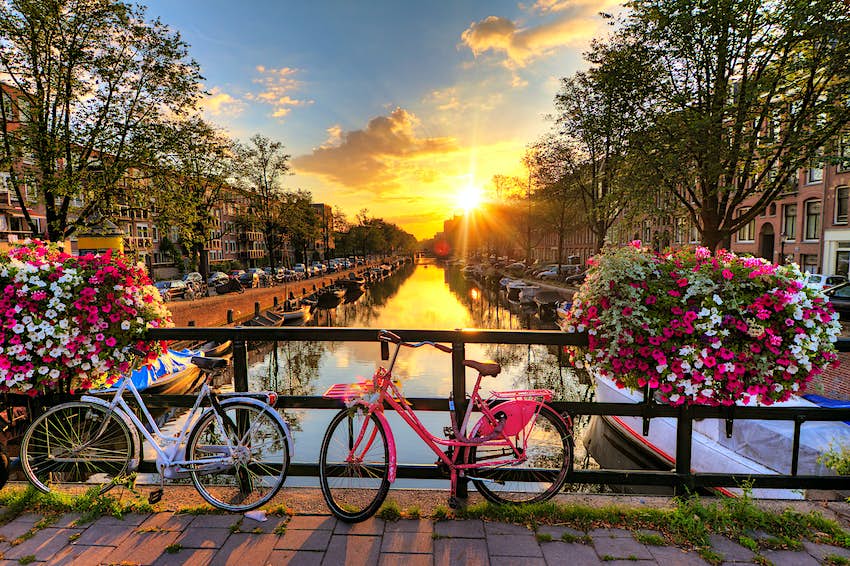 One of Europe's true jewels, with its Golden Age canals bordered by slender gabled buildings and spanned by arched bridges, Amsterdam might be small, like the rest of the Netherlands, but it has an outsized reputation for everything from exceptional art, architecture and innovative design to nightlife. The city's condensed layout means even on a short trip you can fit a lot in, hitting the city's top attractions as well as discovering under-the-radar surprises. Here are 15 of the best things to do in Amsterdam.

Amsterdam is a city shaped by water and its beautiful UNESCO World Heritage–listed Canal Ring is best appreciated by boat during the day or at night, when the canals' ripples reflect the city's twinkling lights.

You can navigate the waterways yourself (companies such as Boaty rent zero-emission electric canal boats) or hop on a sightseeing cruise. Non-touristy alternatives include learning first-hand about the city's history of migration aboard Rederij Lampedusa's former refugee boats, or helping keep the waters clean by "plastic fishing" from Plastic Whale's boats made from retrieved and recycled plastic waste.

Detour: If you prefer to enjoy the canals from land, grab a table at De Belhamel. Situated at the head of the Herengracht, this superb restaurant’s canal-side tables are perfect for canal-watching (summer only).

Amsterdam's top three museums are handily located around the green lawns of Museumplein. Best of them all is the Rijksmuseum. In a palatial 1885 building designed by Pierre Cuypers to hold national and royal collections, it showcases paintings by Dutch masters including Rembrandt and Vermeer, blue-and-white Delftware porcelain and intricate dollhouses.

The world's largest collection of Vincent Van Gogh's works (The Yellow House and Sunflowers among them) hangs at the neighboring Van Gogh Museum. Modern and contemporary creations by the likes of Mondrian and De Kooning are the focus of the bright, light-filled Stedelijk Museum.

Planning tip: All three museums were once part of the I amsterdam City Card, a discount card that provides access to dozens of city attractions, but as of June 2022, the Van Gogh Museum is no longer part of the program. The Netherlands Museum Pass includes all three (as well as hundreds of museums across the country); buy one in person at the Rijksmuseum or the Stedelijk Museum.

When Germany invaded the Netherlands in May 1940, it brought war to the city for the first time in almost four centuries, devastating its thriving Jewish community. It wasn't liberated until May 1945.

The war's impact is especially poignant at the Anne Frank Huis, where the young girl hid for over two years with her family and their friends in a dark, airless "Secret Annexe", recorded by Anne in her diary, until they were betrayed and sent to concentration camps. Only her father survived.

Detour: Amsterdam's occupation is also brought to life at the museum of the Dutch Resistance, the Verzetsmuseum.

Cling-clanging bells and whirring spokes are part of the soundtrack of this city where bicycles outnumber cars. Bike lanes criss-cross the city, the terrain is forgivingly flat and rental outlets abound.

Beyond the built-up streets, fascinating places to explore range from the former ship-building yards of Amsterdam Noord to the rambling woodlands of Amsterdamse Bos and the pretty port of Muiden with its storybook medieval castle.

Amsterdammers' favorite green escape is the Vondelpark, a lush oasis spanning 47 hectares (116 acres) of English-style gardens with fragrant roses, winding paths, ponds and sculptures. One of the best things to do in the city for free, it's an egalitarian space where everyone – kids, adults, couples, joggers, picnickers, locals and tourists – hangs out in the sunshine. Within the park there are cafes as well as an open-air theater.

Planning tip: Situated near the trifecta of the Rijksmuseum, the Stedelijk Museum and the Van Gogh Museum, Vondelpark is the perfect spot to reflect on Dutch art and history.

No matter the weather, the best place to experience Dutch gezelligheid (conviviality, coziness) is in one of its bruin cafés (brown cafes). Dark timber and tobacco-stained walls give these traditional pubs their name. With around a thousand across the city, you'll never be far from one, particularly in charming neighborhoods like the former workers' quarter, the Jordaan, where canalside gems with candle-topped tables include Café Papeneiland, Café Pieper and 't Smalle.

Leidseplein, home to the famed Melkweg, is a major hub, as is nearby Rembrandtplein. Amsterdam's LGBTIQ+ scene is found throughout the city, with popular venues like Cafe Prik thumping dance tunes late into the night.

Detour: Hop on a free ferry to Noord, one of the city’s coolest, most up-and-coming neighborhoods and haven of ultra-hip watering holes. Be sure to check out Pllek and Café de Ceuvel.

8. Snack on local specialties from the street markets

Thanks to prized produce from the country's fertile fields and abundant waters and passionate chefs, Dutch cuisine is having a renaissance. Discover reimagined traditional recipes (such as veal escalope accompanied by an elevated version of the mashed potato and vegetable dish stamppot, and served with melted duck liver and peach chutney) at Greetje, or book a fine-dining feast at D'Vijff Vlieghen or De Silveren Spiegel, both in exquisite 17th-century canal houses.

Nothing says "I'm in Amsterdam" more than sipping a tall, frothy beer under the sails of a windmill. Much-loved craft brewery Brouwerij 't IJ brews in former public baths adjacent to a traditional wooden spinner, and its leafy terrace is idyllic for a pint (try its signature Zatte Tripel). It's often possible to see the brewing in action on a behind-the-scenes tour.

The local firewater, jenever (Dutch gin) is made from juniper berries and served chilled. Amsterdam has some wonderfully atmospheric tasting houses to try smooth jonge (young) and pungent oude (old) varieties, such as 17th-century Wynand Fockink.

Cultural tip: Jenever typically arrives in a tulip-shaped shot glass filled to the brim – tradition dictates that you bend over the bar, with your hands behind your back, and take a deep sip.

12. Stop by a Dutch design shop

Bike carrier straps that function as shelving. Glow-in-the-dark door stoppers. Self-adhesive lamps to stick on the wall. These are just some of the witty, inventive and above all practical Dutch designs you'll find in Amsterdam, along with furniture, fashion and gadgets galore.

A great place to start browsing is Droog, with a garden, gallery space and restaurant where most of the tableware is also for sale. Other emporiums to check out include X Bank, set up as a showcase for local creators, and the Gathershop, which stocks its shelves with handmade and fair-trade gift items.

14. Swing above the city at A'DAM Tower

What's the craziest thing to do in Amsterdam? Swooping out over the city on a giant swing is right up there – literally. At the top of A'DAM Tower, a 1970s high-rise ex-office block, a six-seater swing sends you out over the building's edge, 100m (328ft) in the air, as your feet dangle below.

You can also ride a virtual-reality roller coaster, or take in the view from the tower's 360-degree observation deck, restaurants (one revolving) or rooftop bar.

15. Celebrate at one of Amsterdam's festivals

Your visit to this festive city is likely to coincide with one of its many celebrations, whether food, drink, electronic dance music or classical concerts on barges moored on the canals. The biggest date on Amsterdam's calendar is King's Day (Koningsdag; 27 April), when people don outlandish orange-colored outfits and party in the streets.

Introducing Amsterdam
This article was first published on December 23, 2014 and updated on August 2, 2022 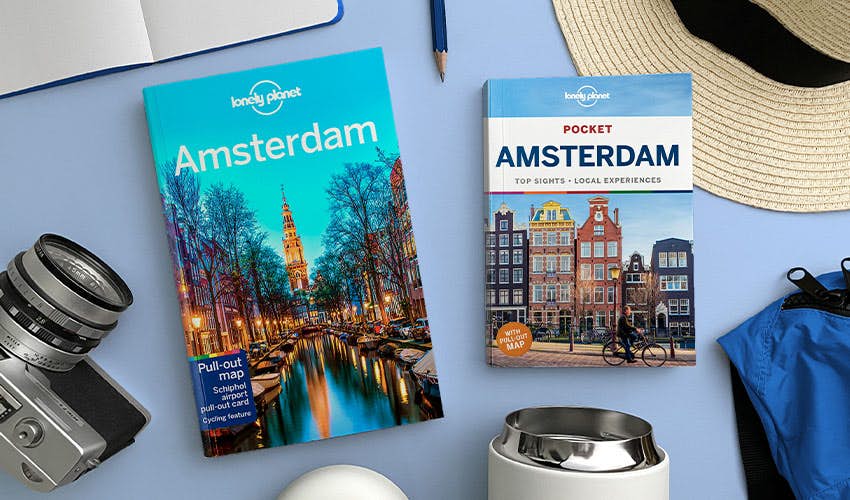 Get to the heart of Amsterdam with Lonely Planet's travel guides

Whether you're visiting for a weekend or a couple of weeks, make the most of your time in Amsterdam with Lonely Planet’s range of travel guides. Experience Amsterdam's neighborhoods like a local and design a trip that matches your interests through insider tips, suggested itineraries, and handy maps.