I've authored more than 50 Lonely Planet guidebooks: my top recs for the best street food in Paris for 2022 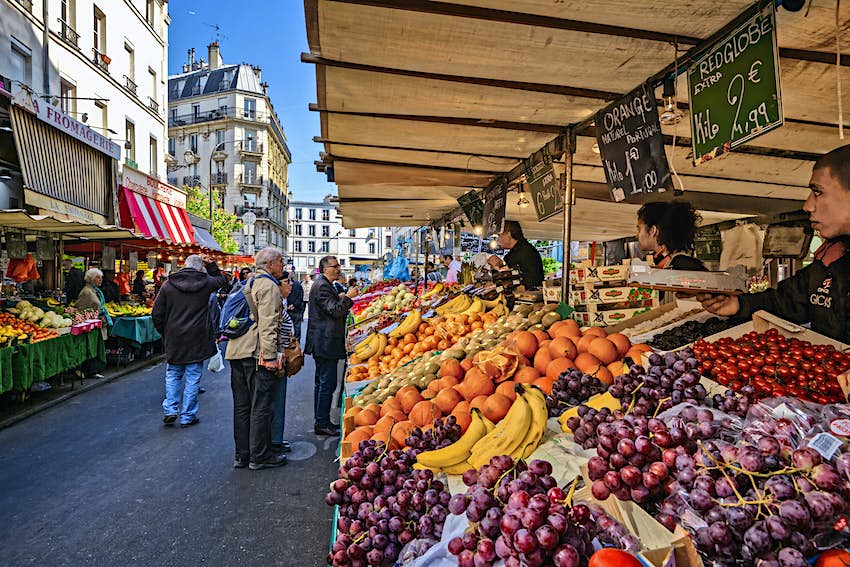 From the top food markets to the tastiest takeouts, this guide can help you find Paris' best street food © Bruno De Hogues / Getty

Once upon a time, a foray in the French capital wasn’t complete without scoffing a sweet crêpe on a street corner in St-Germain des Prés, eye-balling Notre Dame’s grimacing gargoyles over silky slurps of Berthillon ice cream and standing in line for falafel from L’As du Fallafel. Throw in a buckwheat galette, Moroccan couscous or steaming bowl of Chinese noodles for lunch from Marché des Enfants Rouges – the city’s oldest covered market, in the street-eats biz since 1615 – and you were practically Parisian.

Contemporary street food in Paris travels taste buds a million miles beyond these faithful old-timers. Current culinary trends place local, seasonal, organic produce on a sky-high pedestal and have morphed ‘la street food’ into a movement against ‘la malbouffe’ – a French phrase for junk food. The trick to tracking down the finest street eats crafted by experimental chefs with skill, sass and sustainable care? Follow the local street-smart crowd to these new-gen foodie favorites.

Top 10 things to do in Paris in spring

Urban vegans can’t get enough of this increasingly cult, plant-based sandwich shop by Canal St-Martin. Each dwich is jumbo-sized, with two chunks of succulent olive-oil bread toasted and stuffed with seasonal produce and ingredients. Veggies run the gamut of cooking styles, from raw or charred, to pickled, mashed and marinated, and the smoked sauce is addictive. Grab an ice-cream sundae for dessert, a bottle of fruity pale ale brewed by BapBap in the ‘hood, and lunch like a king on the alfresco banks of the green-hued canal.

Handy pit stop: in between street art discoveries or a bike ride along Canal St-Martin.

Purists seeking a fix of Parisian steak-frites (steak and fries) need not despair. Head to Le Marais where La Baguette du Relais doles out wedges of crispy baguette filled with tender sirloin steak, a herby sauce whipped up according to a secret recipe and perfectly crisp, skinny fries. The concept might sound hideously ‘un-French’, but anyone familiar with the 1950s brasserie behind this recent street-food venture – Le Relais de l’Entrecôte, famous for serving everyone the same salad-steak-and-chips meal – will instantly understand the allure. Pick from regular, gluten-free or charcoal bread and know how you like your steak cooked: saignant (rare) in France is very pink and à point (medium) is akin to medium-rare or even rare by American and British standards.

Handy pit stop: after Notre Dame and the islands, Mémorial de la Shoah and Centre Pompidou or a boat tour on the Seine.

Discover the Louvre's hidden treasure in this lesser-visited wing

Crêpes: where to find the most authentic in Paris

Authentic street stands are like gold dust, but scoffing a crêpe in the street – laced with warm Nutella chocolate spread and banana slices perhaps or uber-sweet crème de marron (chestnut cream) – remains one of Parisian life’s simple pleasures. Join the eternal queue at Crêperie de St-Germain, a retro racing-green kiosk by Église St-Germain des Près where large thin pancakes have been served to a faithful crowd for decades.

Authentic Breton crêpes to take-away are the order of the day at this specialist Breton grocery run by the neighboring Breizh Café. Order a savory galette made with organic buckwheat flour and your choice of fillings, and eat it in the small park across the street. Sweet crêpes too, doused in salted-butter caramel and a bevy of other killer-calorie toppings.

Handy pit stop: after the treasured Musée National Picasso or on a Marais shopping spree.

Where to stay in Paris

Buns & dumplings: go to this takeaway window near the Louvre

In the Louvre area, dig into succulent baos (Chinese steamed buns) to go from the takeaway window at the upmarket boutique of Michelin-starred chef Adeline Grattard from fine-dining restaurant Yam'Tcha. Unusual flavors include Stilton cheese with Amarena cherries, onions and curry, or Basque pork with Sichuanese eggplant. Wash them down with aromatic green or oolong tea on a bench in elegant Jardin du Palais Royal or between voluptuous statues on the romantic pea-green lawns of Jardin des Tuileries. If a Full Monty Chinese banquet appeals, grab one to take away from Yam’Tcha’s nearby cafe Lai’Tcha.

Handy pit stop: for lunch in the park after hobnobbing with Mona Lisa at the Louvre and/or Monet at Musée de l’Orangerie.

Things you should know before traveling to Paris

The best Paris pâtisseries that are worth the wait

Queues stretch down the street for world-renowned pastry chef Cédric Grolet's elaborate creations at his same-name boulangerie-pâtisserie, many of which resemble floral blooms almost too good to eat. Sit in or take away exquisite viennoiserie (pastries), magnificent filled still-warm baguettes and signature cakes aka edible works of art. Gastronomes won’t be disappointed by the unmatched caramel-and-Tahitian-vanilla St-Honoré or Paris-Brest.

Handy pit stop: a decadent bite between fashion-boutique shopping in the Champs-Élysées and Grands Boulevards district.

An elegant mint-green box of seasonally flavored macarons from Ladurée or a flamboyantly filled éclair from a Chrisophe Adam L’Éclair de Génie boutiques is a Parisian rite of passage. For something more grassroots and experimental, pop into the seductive cake shop of Michelin-starred chefs from neighboring Septime and Clemato. From creamy egg tarts and seasonal fruit flans to sinful maple syrup tartlets, everything at Tapisserie is artisanal and insanely fresh – a sign in the window tells you what time to expect what hot from the oven.

Handy pit stop: a decadent bite between fashion-boutique shopping in the Champs-Élysées and Grands Boulevards district.

Top things to do in Paris

The best burgers in Paris are a gourmet delight

Rumor has it Baby Love Burger in the 11e dishes up the most authentic burgers in town. Certainly the ethically-farmed beef, twice-fried frîtes (fries) and Real McCoy, British cheddar cheese in a bun pack a serious gourmet punch – as does the Pop-styled interior with cherry-red linoleum and house motto ‘No panini, no wrap, no crêpe!’ lit up in neon. Monster-sized triple burgers, a tasty veggie version and crispy fried chicken flesh out the no-messing menu.

Handy pit-stop: after a mooch around the Belleville market or between drinks on a Ménilmontant bar crawl.

The 10 best parks in Paris

Deli picnics: the best takeaway to get away

Back in the new millennium, Thomas Lehoux introduced Paris to decent coffee by co-founding an artisan roastery in backstage Belleville. The visionary barista and epicurean is now injecting serious doses of panache into street food with his gourmet épicerie (delicatessen) in the 11e. Everything on his market-fueled menu – two starters, two mains and two sandwiches, different each week – can be taken away as a deli picnic. Every course has a vegetarian option: young goat’s cheese marinated in Provencal herbs and zaatar perhaps, Hokkaido pumpkin brioche with grilled leeks and mushrooms, a goat’s cheese sandwich with beetroot cream, roasted hazelnuts, apple and watercress.

Dip into the soul food of multicultural Paris with a lavish picnic of takeaway dishes from this deli-diner by Lebanese food activist Kamal Mouzawak. The Lebanese buffet served at his hybrid épicerie-restaurant screams ‘cuisine maison’ (home cooking) and celebrates regional farmer kitchens. Each day showcases dishes from a different part of Lebanon – green bean moutabbal (dip) or spinach and grilled walnut salad from the north, tabbouleh and stuffed cabbage much-loved in the mountains, warak enab atee (stuffed vine leaves) from the Beqaa wine region.

Handy pit-stop: when exploring hipster Canal St-Martin – there really are few lovelier spots in Paris for a waterside picnic.

The 7 best day trips from Paris: add a new dimension to your city break

But it is their cardboard boxes of sugar-dusted or -glazed donuts to take away that are the icing on the cake: the moreish balls of deep-fried dough overflow on first bite with homemade cream in ‘classic or ‘unapologetically Asian’ flavors (kaya, spicy mango, durian, passion fruit, sweet-and-sour pork floss). Wash them down with a fresh coconut, golden milk latte or bubble tea to go.

Handy pit-stop: during a shopping spree in the fashionable Haut-Marais or at the open-air Marché Bastille on Thursday and Sunday mornings.

Handy pit-stop: after a morning at Europe’s oldest science and technology museum, the Centre Pompidou, Bourse de Commerce Pinault Collection or the Louvre.

Paris vs Rome: which iconic city is right for you? 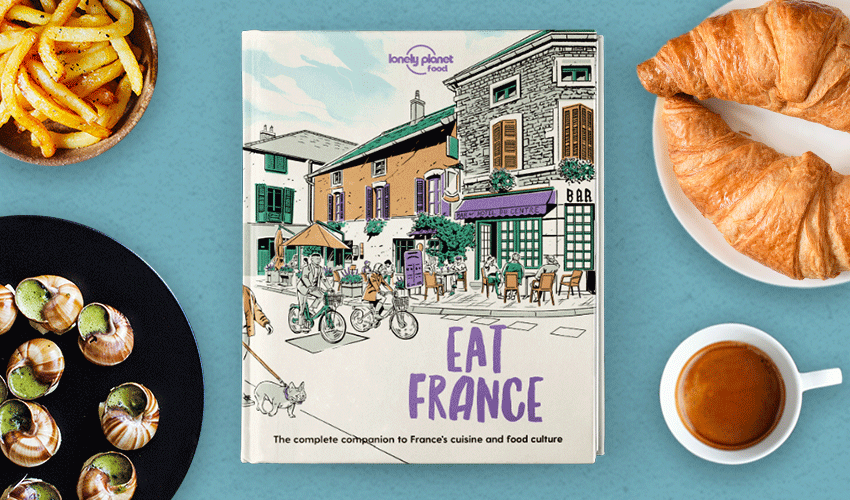 To help you feel prepared for the French food scene we'll cover how, when and where to eat, etiquette dos and don'ts and what classic regional specialties are a must try. You'll find the best places to eat in every region as well as what to order when you're there and how to eat it.