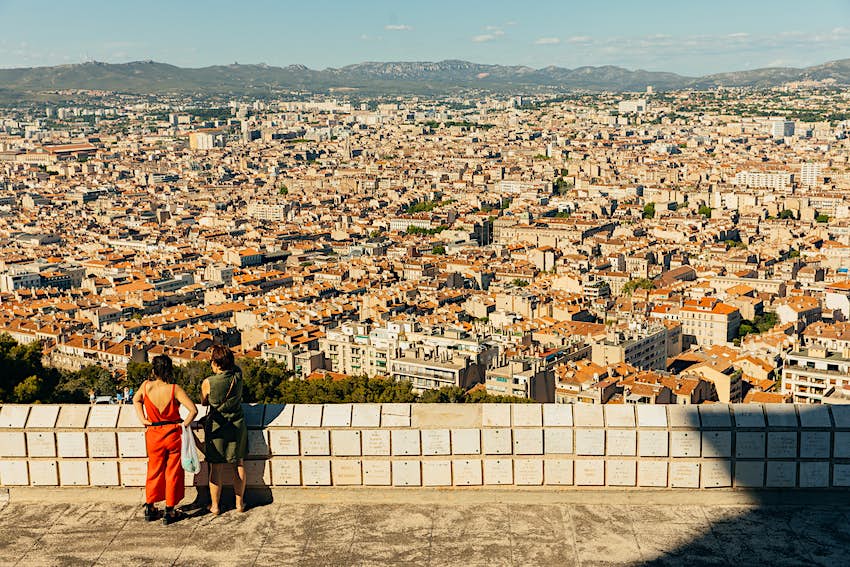 Savoring an aperitif at sundown as the fiery sun sinks into the big blue has been a sacrosanct ritual in seafaring Marseille since time immemorial.

But the bar scene has evolved far beyond sailors chugging back bottles of cheap wine portside or Marcel Pagnol film characters chinking Pastis glasses in the 1930s at the Vieux Port’s Bar de la Marine. As southern France’s grittiest, giddiest city has morphed from Mediterranean black sheep to metropolitan trendsetter with cool factor extrême, so the drinking scene is reaching heady new heights – on its rooftops.

Iconic roof decks like MAMO with its occasional art expos atop Le Corbusier’s La Cité Radieuse or MuCEM’s sensational lattice-shaded terrace have lost none of their pioneering edge. But they remain, first and foremost, a place of pilgrimage for art and design lovers. Social butterflies, night owls and cocktail connoisseurs seeking expertly mixed tunes, drinks and dancing: these are Marseille’s 10 rooftop hot spots.

Stop by Tuba for the best new opening in town

When the roof you’re drinking on safeguards a mosaic by French street-art king Invader, you know you’re in the right place. Trendy, eco-conscious Tuba struts its achingly cool stuff in a 1960s diving club in the fishing hamlet of Les Goudes in Marseille’s 8e arrondissement. With tables on rocks by the water, sassy cocktails and shared plates (raw fish!) served with brilliantly creative sauces, Tuba is the city’s summer HQ for gourmet A-listers, and its new rooftop bar opened in July 2022. Expect more sea views to die for (celestial sunsets!), original tapas served in pizza boxes and signature cocktails mixing artisan spirits with thyme, rosemary, ginger and other gloriously eclectic and tangy homemade syrups.

Enjoy a non-rooftop bar with incredible views at La Caravelle

Once upon a time, decades before Marseille joined the ‘cool city’ ranks, the closest thing to a rooftop bar in the Provencal capital was La Caravelle – the city’s original "bar with million-dollar views." On the portside fringe of Le Panier, the 1920s restaurant-bar offers a romantic window on the Vieux Port from its second-floor balcony perch inside Hôtel Bellevue. The retro nautical décor, jazz concerts and vintage charm are eternally enchanting, and the port-facing bijou balcony remains one of the most hotly contested seats in town for watching sunset skies blaze pink behind Basilique Notre Dame de la Garde. But it is not strictly un rooftop.

Dine in the sky at Ciel

Downtown Marseille is hardly a skyscraper city – which made Ciel (meaning ‘sky’ in French) all the more exciting when it popped up on the 7th floor of one of the city center’s highest buildings in the summer of 2021. Strung with canvas sails to shade and garlands of twinkling fairy lights after dark, the designer rooftop restaurant cooks up mesmerizing city views and top-notch pizza and pasta by an Italian chef. Aperitivo highlights include deep-fried artichokes, aromatic San Daniele ham cured for 16 months and parmesan tempura. The best seat in the house? The Instagram-loved wooden swing on the terrace. Yes, it swings.

Dance late into the summer nights at R2

Retired shipping containers upcycled as ethnic street-food stands, cocktails with attitude and sizzling sea-and-port views contribute to the charisma of this wildly popular, open-air bar and dance club. Wednesday to Sunday, DJs from the international circuit spin diverse sets (electro, disco, rock) to a party-loving crowd – up to 1500 night owls pack the dance floor to bursting on the best nights. Find R2 (also known locally as ‘Aire de Marseille’) on the rooftop of Les Terrasses du Port, a contemporary shopping center in the revitalized 19th-century docks of La Joliette.

Escape the bustle of La Canebière at Les Réformés

When the relentless throng of shoppers and strollers on La Canebière gets too much, rise above the main-street hubbub at Les Réformés. Tucked away on the rooftop of the Arteplex multi-screen cinema on La Canebière, the restaurant-bar is named after its next-door-neighbor muse – twin-spired, 19th-century Église St Vincent de Paul or "Les Réformés," which you can admire from every angle atop the rooftop terrace. Seasonal French cuisine is the backbone of the menu, and the kitchen cooks up small plates to share over drinks and weekly live jazz or DJs.

Order drinks in a garden above the city at Bar Julis

This alfresco cocktail bar in Jardin de la Colline Puget is another non-rooftop pick, but the soul-soaring snapshots of Lego-like Marseille laid out at your feet put it up there with the very best of Marseillais sky bars. The garden is a steep five-minute climb on foot from portside Quai de Rive Neuve – don’t miss Invader’s dazzling gold-tile Oh Bonne Mère! mosaic, depicting the city’s traditional protector, on the corner of Rue des Lices and Rue Chaix. Once perched on a bar stool, hobnob with a local after-work crowd over signature cocktails (the Ginger Julep is fabulously feisty) and Mediterranean tapas (clam salad, caramelized leeks with oysters and haddock, chargrilled octopus and chorizo) cooked up by chef Paul Langlère from adjoining neo-bistro Sépia.

To party with an almost exclusively Marseillais crowd, make a beeline for the city’s most experimental rooftop bar – the crowning glory of a revitalized tobacco factory in the La Belle de Mai neighborhood. The cultural center’s sweeping, 8000-sq-m (86,111-sq-ft) toit terrasse (roof terrace) is accessible year-round, but it is between May and October when it really comes into its own: think free ‘Belle & Toile’ movie screenings beneath the stars on Sundays in July and August, electric African and other world-music gigs, DJ sets, dance parties and a multitude of uber-cool "Soirées On Air."

Appearances can be deceptive, as this simple, two-star indie hotel at the Vieux Port illustrates so beautifully. Ride the elevator to the top floor to uncover its clandestine rooftop bar – a closely guarded secret among savvy locals, open to non-hotel guests from 6.30pm until late. The kitsch marigold-yellow seating and faux pea-green lawn might not be to everyone’s taste. But the cocktails, mixed cheese and charcuterie platters, and birds’ eye views of boats bobbing in the Vieux Port below are all spectacular. Order a Pina Colada glacée (with coconut ice cream) and a plate of panisses (mini chickpea-flour pancakes with fiery chili sauce), eye-ball Notre Dame de la Garde across the water and enter heaven à la Marseillaise.

Its name is no misnomer. Lounging by the city’s well-established rowing club in the Jardin du Pharo area, this rooftop restaurant and bar ticks all the boxes for families and couples seeking good food and ravishing sea views away from the noisy downtown crowd. The refined Mediterranean menu might include seasonal dishes like octopus with passion fruit and kumquat marmalade, deep-fried squid with garlicky rouille or elaborate tapas crafted from the catch of the day. Reservations at Rowing Club are essential on Sunday when a copious, bottomless buffet brunch is laid out.

Experience five-star luxury by the port at Dantès Skylounge

The perfect pairing with the neighboring Rowing Club for anyone on a rooftop crawl, Dantès Skylounge squats on the seventh floor of luxury Hôtel Sofitel Marseille Vieux Port. A magnificent panorama of the entire Vieux Port, guarded by the twinset forts of St-Jean and St-Nicolas, unfolds from the sophisticated roof bar – open to non-hotel guests too until the wee hours. Sink into a comfy armchair and admire the city from above over a Provence-inspired cocktail, pastis or pink gin distilled by Mistral Gin from thyme, mint, fennel and other fragrant botanicals typical to the garrigue (Mediterranean scrub) in Marseille’s neighboring Massif des Calanques. Santé!