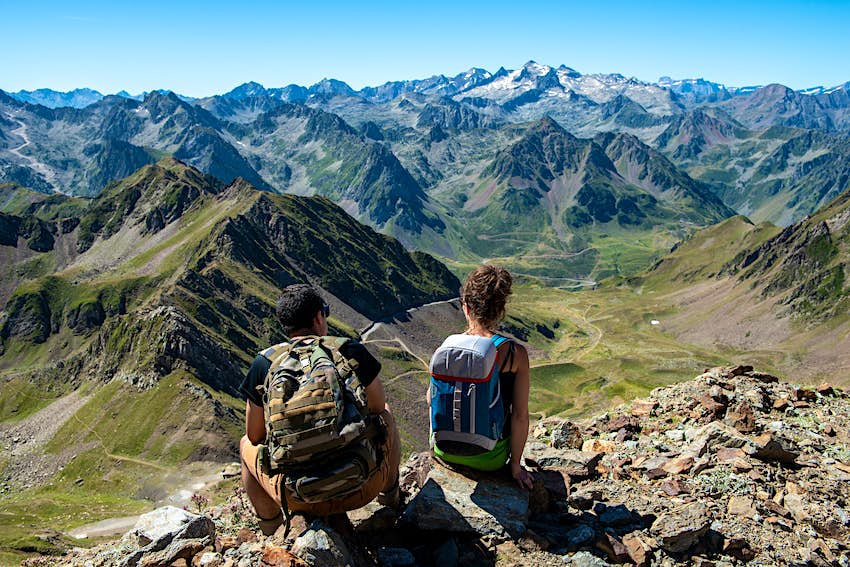 From alpine peaks to startling stretches of coast, here are some of the most beautiful natural spots in France © Shutterstock / PHILIPIMAGE

Everyone raves about France for its cuisine and culture, but the country also enthralls with its natural wonders – from the highest peaks in Europe to colossal canyons, lyrical rivers, crash-bang waterfalls, and fields of purple lavender and pink-granite coastlines ripe for an impressionist painting.

Venture beyond the usual tourist trail of cities and towns and you’ll stumble across scenes that beggar belief – from mighty sand dunes backdropped by the crashing Atlantic to pink salt lakes fizzing with flamingos. Here are 10 of our favorites to get you started.

Hike in the Gorges du Verdon in Haute-Provence

For drama, few sights in France beat the ragged, plunging cliffs of the Gorges du Verdon, where the surreally turquoise Verdon River slips through a 25km (15.5-mile) limestone plateau to the foothills of the Alps.

Eroded by the elements over millennia, this gorge is the centerpiece of the Parc Naturel Régional du Verdon. Towering up to 700m (2297ft) high, the cliffs attract birds including golden eagles and a colony of reintroduced vautours fauves (griffon vultures).  The canyon has been dubbed "Europe’s Grand Canyon," but frankly, why would you want to imagine yourself anywhere else?

This southern French valley is a magnet to adventure travelers (as well as a favorite spot for that less-adrenaline-fueled pastime, le pique-nique). Kayakers and climbers test their limits on the rocky outcrops, but stunning views are on show to road trippers too (the scenery from Moustiers-Sainte-Marie to Castellane is truly sensational).

Climb above the Aiguilles de Bavella in Corsica

Corsica feels like a world apart from mainland France, particularly in summer when the island is aflame with wildflowers. In the south, no sight is more arresting than the Aiguilles de Bavella (Bavella Needles), soaring over 1600m (5249ft). These great spires and turrets of granite are captivating, whether you glimpse them in the golden shadow of morning or the rosy tint of dusk.

For stellar views, hike from Col de Bavella (Bavella Pass; 1218m/3996ft), keeping an eye out for mouflons (wild mountain sheep). To glimpse them from above, hook onto the long-distance GR20 hiking trail, which hoofs it up to Mt Incudine (2134m/7001ft). The area is also a rocky wonderland for climbers and canyoners.

What could be more French than a field of fragrant lavender bowing in the summer breeze?

OK, so there’s nothing "natural" about the neatly tended rows, but the vivid purple hills of Provence are rightly legendary. Every summer, roughly from late June to early August, flowering lavender sets the hills of southern France alight with color and perfume.

One of the most iconic views is at the Abbaye Notre-Dame du Sénanque, its medieval abbey idyllically framed by a serried sea of lavender. But if you want to dive properly into the violet deep end, plan a road trip or bike ride along Les Routes de la Lavande, which bring together oil distilleries, farms, parks and lavender museums. Mid-July is the best time to visit for blooms.

Brittany has such a sensuous stretch of coast that even the boulders blush. The Côte de Granit Rose (Pink Granite Coast) flushes a delicate shade of copper pink, giving a surreal air to this breezy, Celtic-spirited slice of northern France.

Running some 30km (19 miles) from Penvern to Trégastel and Ploumanach, this stretch of coast is a real natural beauty, with spectacularly eroded rock formations, rock pools, caves and coves washed by a sea of pure turquoise. Drink in the views on a coastal walk through pines, gorse and mimosa. After hitting the trail, Breton favorites like mussels, cider and galettes (buckwheat pancakes) await.

Rippling above Atlantic surf and forests of maritime pine, oak and strawberry trees, Europe’s highest sand dune draws paragliders, sun-worshippers and – believe it or not – the occasional skier (when winter brings a dusting of snow to the Saharan scene). Scale this southern French gem, barely an hour from wine-rich Bordeaux, and you'll be shaking golden sand out of your socks for days.

Climb to the wind-whipped summit at 115m (377ft) above sea level and the views are astonishing, reaching across the Banc d’Arguin bird reserve’s tide-sculpted, shape-shifting sands, where oyster farmers work and sandwich terns and other migratory birds strut, and all the way across the bay to Cap Ferret. And you'll feel forever five years old when you race gleefully back down in an exhilarating sprint.

Already Europe’s largest, the dune is growing eastwards 1.5m (4.9ft) a year and has already swallowed trees, a road junction and a hotel whole.

Flamingoes, you say? Top billing goes to the Parc Ornithologique du Pont de Gau, where you can see hundreds of them.  (Note: they look their pink best with their new plumage from December to March.) Bring binoculars to sight other migratory species flitting among the wetlands, such as herons, storks, egrets and grebes. The park has 7km (4.3 miles) of trails to wander.

Brave the big one at Mont Blanc in the French Alps

Europe’s highest peak, towering 4807m (15,771ft) above sea level, Mont Blanc is the icing on the cake of the French Alps – and what a beauty it is.

You can see its pearl-white summit from afar, but getting closer brings home the raw wilderness of its realms of rock and eternal ice. There are many ways to appreciate it, whether you are a hiker, peak-bagger, climber or ski tourer. If you plan to grapple with carabiner and crampon, enlist an experienced guide as conditions can be extreme.

The big one is the 169km (105-mile) Tour du Mont Blanc, cutting across France, Switzerland and Italy – a proper adventure that traverses mind-blowing glacial landscapes and stops off at nine villages (many of which are impassable due to snow for much of the year).

In winter, the multi-day Haute Route (from Chamonix to Zermatt) is an epic ski, taking you from Mont Blanc to the Matterhorn, with four-thousanders keeping you company all the way. Otherwise, hop on the cable car floating up above the shimmering ice to Aiguille du Midi, and beyond to Italy on the Télécabine Panoramique Mont Blanc.

Find inspiration in the Étretat cliffs of Normandy

As day fades into pastel dusk, you can see why the arches of Étretat excited many an impressionist artist. Diving deep into the Atlantic, these chalk cliffs and rock arches – spectacularly eroded by wind and water over millennia – are one of France’s most evocative coastal landscapes.

Étretat has inspired everyone from 19th-century French author Guy de Maupassant to painters such as Camille Corot, Eugène Boudin, Gustave Courbet and Claude Monet. The most photographed arch is Falaise d’Aval, with its needle, or Aiguille – a 70m-high (230ft) spire of chalk-white rock flinging up from the waves. Look closely and you can see why Maupassant said it resembled an elephant dipping its trunk into the sea.

Skiing, boarding and making snow angels are all excellent pastimes for France’s rugged Haute-Savoie region, but summer in the mountains also has its charms.

Grab your binoculars to spy fuzzy locals, like wild boar, ibex and mountain hares. The mountain-dwelling marmot is a local icon, so if your wildlife-spotting draws a blank, gift shops in local towns like Morzine overflow with cuddly souvenirs (for a friend, of course).

Gaze in wonder at the Cirque de Gavarnie in Hautes-Pyrénées

Starting their journey in the Spanish Pyrénées and fed by glacial waters, these tiered cascades are at their most gushing after the spring melt. After heavy rain, it’s as though God himself left the tap on.

This immense and spectacular glacial bowl sent Victor Hugo into raptures when he called it "nature’s Colosseum," and you can believe the hype. For ringside views, hike along well-marked trails to the Plateau de Saugué at sunrise.