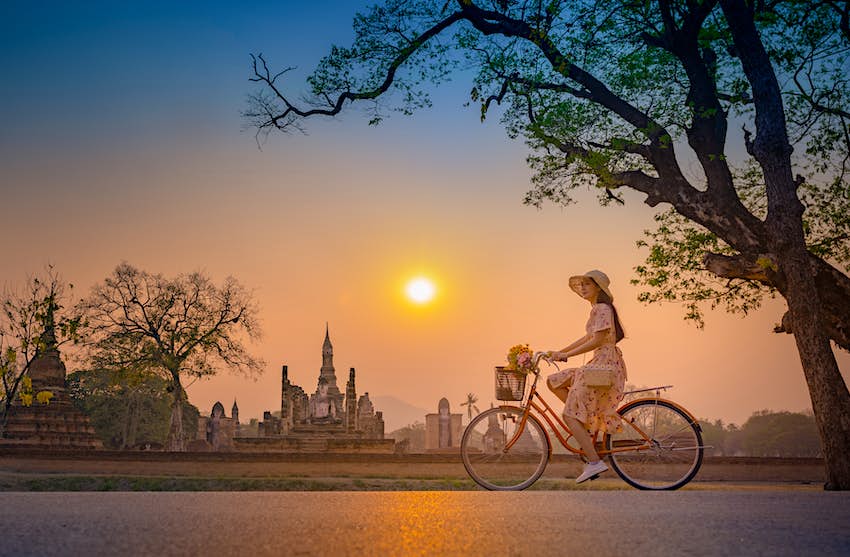 Bangkok is an all-you-can-eat buffet feast for the senses – the sights, the sounds, the sensations, even the smells. But for all its golden brilliance, and its full hand of markets, temples, palaces and world-class food and nightlife experiences, the Thai capital can be overwhelming in large doses.

During the northern hemisphere winter – Bangkok's peak season – the weather is cool and dry and perfect for exploring, but the crowds can resemble the start of Woodstock. Fear not – easy day trips from Bangkok let you leave the hordes behind and connect with a gentler, calmer vision of the Land of Smiles.

When the streets, traffic fumes and pushy tuk-tuk drivers start to close in, just venture out beyond the city limits to historic towns, ancient ruins, evocative WWII relics and even golden beaches. Here’s our pick of the best day trips from Bangkok.

Enjoy rural calm in the city at Bang Krachao

Although nominally considered part of Bangkok, Bang Krachao feels like stepping into rural Thailand – the antithesis of the chaotic metropolis across the Chao Phraya River. Underdeveloped and underexplored, this peaceful district offers such delights as the Bang Nam Pheung floating weekend market, a scattering of 250-year-old temples and an eco-resort where you can sleep in a treehouse.

Largely covered by farmland, this 16 sq km (6.2 sq mile) island is filled with mangrove forests, small homesteads, and elevated pathways precariously perched above winding canals. It’s popular with cyclists, who zip past the teak-framed houses shaded by clusters of palm trees, but it's worth coming on foot to properly explore what remains of the hamlets now absorbed by Bangkok's urban sprawl.

A must-stop is Si Nakhon Kheun Khan, a public park and botanical garden with bike trails, fishponds and a bird lookout where you can spot many striking Thai bird species.

How to get to Bang Krachao: Boats make the five-minute river crossing to Bang Krachao from Wat Klongtoey Pier in the southeast of the city, about a half-hour taxi ride from the center of Bangkok (longer in traffic). Once on the island, bikes can be rented at the pier for around 80B per day.

A man-made island in the Chao Phraya River, Ko Kret was first settled by Mon people from Burma, who ruled central Thailand between the 6th and 10th centuries. Twelve kilometers north of central Bangkok, the island today is a charming backwater, largely untouched by modern development. It's a place to escape the crowds and cars of the Thai capital – only bikes and motorcycles are allowed on its one road.

Ko Kret is also celebrated for its handmade terracotta pots; you can visit workshops and buy ceramics directly from local artisans who continue to use techniques handed down through generations. Renting a bicycle or hopping on a moto-taxi is the most effective way to explore. Don't miss Wat Poramai Yikawat, the grandest temple on the island, with a Mon-style marble Buddha statue and a museum showcasing local ceramics and religious relics.

At weekends, a busy morning food market full of vendors selling Mon dishes and Thai desserts draws both locals and savvy travelers. Arrive when it opens at 9am for the best selection of dishes to sample!

How to get to Ko Kret: Ko Kret is located to the north of central Bangkok. The easiest way to come is by taxi or bus 166 from the Victory Monument to Wat Sanam Neua in Pak Kret, where you can board a cross-river ferry. Alternatively, charter a longtail river taxi from Nonthaburi, the northern terminus of the Chao Phraya Express riverboat. The journey from Saphan Taksin (Central Pier) to Nonthaburi Pier takes around 40 minutes.

Before Bangkok claimed the crown as the Thai capital, Ayuthaya was the official seat of the long-lived kingdom of Siam. The ancient city was founded in 1350 and its extravagant rulers filled the streets with some 400 temples and palaces, many adorned with resplendent gold leaf. Most were ravaged when Burmese invaders rolled into town in 1767.

Today Ayuthaya's many ancient relics live on as genteel ruins, giving Cambodia’s Angkor Wat a run for its sightseeing money. The Khmer-style spires at Wat Ratchaburana still rise as dramatically as they did in the 15th century, while Wat Mahathat is famed for its sandstone Buddha head tangled in the roots of an ancient Bodhi tree. Chao Sam Phraya National Museum, meanwhile, is the custodian of items once housed in the temple’s crypts, including ancient Thai pottery.

The temples are dotted around the peaceful Ayuthaya Historical Park, which is best circumnavigated by bike. Pick up rental wheels on arrival outside Ayuthaya train station. Alternatively, jump in a tuk-tuk for a breezy way to explore this fascinating Unesco World Heritage site.

How to get to Ayuthaya: Ayuthaya is north of Bangkok, roughly an hour away by car or shared minivan from Bangkok’s Victory Monument. The trip doesn't take much longer by train to Ayutthaya Station, about 4km (2.5 miles) from the ruins.

Discover WWII history and the great outdoors in Kanchanaburi

Kanchanaburi has a dark history to thank for its modern-day popularity. The town is the setting for the hauntingly-titled Death Railway Bridge, built by Allied prisoners during WWII and immortalized in the (largely fictional) plotline of Pierre Boulle’s novel The Bridge Over the River Kwai and the subsequent Hollywood movie adaptation starring Alec Guinness.

As well as this evocative landmark, the town is dotted with fascinating war museums – including the JEATH War Museum, which displays photographs, paintings and wartime relics (such as an unexploded bomb). Dotted around the streets are somber cemeteries that give a human face to the harrowing events that took place here.

But there’s more to Kanchanaburi than military history. If you're looking to take it easy, the surrounding countryside offers a wealth of low-key outdoor activities. Admire the handsome buildings along the town’s Heritage Walking Street, and duck into ancient temples such as Wat Ban Tham, with its entrance resembling a dragon’s mouth. Take a bamboo raft down the river or swim in the stunning waterfall in Erawan National Park, then take an organized trek into the area’s dense jungles.

How to get to Kanchanaburi: Kanchanaburi is located to the west of Bangkok, two hours away by car. It's also easy to reach Kanchanaburi by train, but this requires a change in Nakhon Pathom; allow three hours in total. Alternatively, minivans regularly depart from Victory Monument.

Is the beach resort of Pattaya worth visiting? That depends on who you ask. For some, this is just a conveniently located Thai beach resort, handy for the capital and packed with attractions for all ages, including two water parks and a zipline course, plus some great hotels and restaurants targeting the tourist crowds with piles of pancakes and full English breakfasts.

Others will recoil at the touristy vibe and lingering signs of the sex industry that has fueled Pattaya’s popularity ever since off-duty American GIs first started coming here in the 1960s. The sleazy beer bars, go-go clubs and massage parlors aren’t exactly hard to spot.

But putting that to one side, Pattaya has a couple of decent strips of beach – namely Naklua to the north and Jomtien to the south – for those hankering for a quick dip after the sizzling urban heat in Bangkok. Night owls are well catered for too, with a good selection of non-seedy bars, including live music venue Hot Tuna and nightclubs aplenty.

How to get to Pattaya: Pattaya is around two hours southeast of Bangkok by road. Several companies run direct buses and minibuses to Pattaya, including 12Go Transport, with a service leaving from Makkasan Station on New Petchaburi Rd in Bangkok.

Thailand’s original beach resort is no palm-fringed castaway island and arguably is all the better for it. Instead, Hua Hin is a refreshing mix of city and sea with lively markets, good golf courses and water parks, and an ambiance that just keeps getting more hip and cosmopolitan. In fact, many visitors never even step foot on the sand.

This former fishing village rose to prominence in the mid-1920s, when it was transformed into a fully-fledged resort town for the Bangkok-based nobility. Kings Rama VI and Rama VII built summer palaces here, but today, the resort attracts Bangkok folk from all walks of life.

Given the resort is around three to four hours from Bangkok, most day-trippers chose to stay for at least one night. Fortunately, Hua Hin has a good array of guesthouses catering to paupers as well as princes. Likewise, the town's restaurants dish up plenty of low-priced, high-quality seafood.

While the beaches don’t rival those of Thailand’s southern islands, and are a bit too shallow for proper swimming, Hua Hin is Thailand's kiteboarding capital, blessed with strong, gusty winds. Lessons are available from several outfits including Kiteboarding Asia.

How to get to Hua Hin: Hua Hin is located 221km (137 miles) southwest of Bangkok, and it takes just under three hours to get here by car, or four hours by bus. Direct trains also connect Bangkok Train Station and Hua Hin in around four hours.

What to eat and drink in Ireland

8 unique things to see and do in Kuala Lumpur

7 min read • Published about 2 hours ago

4 min read • Published about 3 hours ago