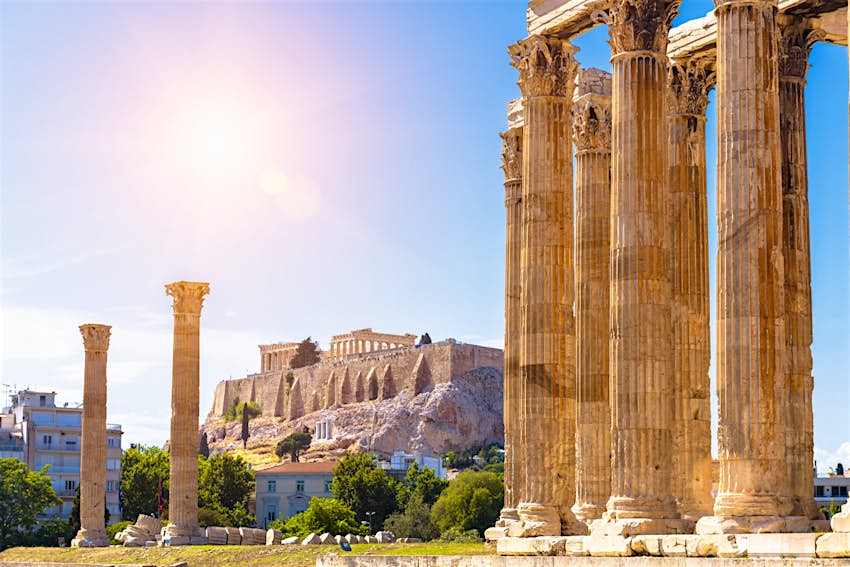 A walk around the magnificent monuments of Athens, on the same soil where democracy, art, drama, science, sculpture, and philosophy flourished centuries ago, is an uplifting experience for any traveler © Viacheslav Lopatin / Shutterstock

Athens is a sun-drenched, charming, and buzzing modern metropolis, offering everything a visitor can expect for an exciting stay. But it is the city’s omnipresent tokens of its glorious past that make Athens a unique cultural destination with extraordinary energy and appeal.

A millennia’s worth of history is housed in the city’s many museums as well as in countless in-situ ruins and archaeological sites – eternal reminders of a past that shaped the western civilization.

A walk around these magnificent monuments, on the same soil where democracy, art, drama, science, sculpture, and philosophy flourished centuries ago, is an uplifting experience for any traveler. Here are our favorites:

The Acropolis, a beacon of universal splendor

The Acropolis of Athens, a sight universally associated with the city, is the crown jewel of its monuments and the starting point of every traveler’s excursion through the wonders of Greek civilization and history.

Built between 447-437BC during the “Golden Age” of Athens under statesman Pericles, and dedicated to the goddess Athena, the Parthenon is a timeless masterpiece of architecture with a profound influence on the history of humanity. It was designed and built by some of the most famous architects of the time – Iktinos and Kallikrates – and decorated by the genius sculptor Phidias.

Also on the sacred rock, you’ll marvel at several other monuments. The Erechtheion features the glorious Caryatids – stone pillars carved in the forms of women. The original Caryatids are safely housed in the nearby tremendous Acropolis Museum (one is in the British Museum) but replicas have been put in place. There’s also the imposing Propylaea entrance to the rock, and the compact but brilliant Temple of Athena Nike. Together with the Parthenon these sights constitute the iconic Greek antiquity complex.

Exploration and excavation of the surrounding sites began in the 19th century, soon after the establishment of the modern Greek state, and continued until the middle of the 20th century.  At the dawn of the century, the ‘Unification of the Archaeological Sites of Athens’ project resulted in the pedestrianization of the Ancient Promenade, arguably one of the most beautiful walks in the world.

On the southern slope and within the site of the Acropolis lie the remains of the ancient Theatre of Dionysos, where the plays of the great dramatists – Aeschylus, Sophocles and Euripides – were performed. These days, in the spectacular Odeon of Herodes Atticus, performances of opera, dance theater, and music are held almost daily in summer – an unforgettable way to spend an evening in the capital.

Following the pedestrian Dionisiou Areopagitou Street to the east, the imposing Hadrian’s Arch emerges across the street. Built in 131AD, it combines Roman with Greek architectural elements. Just next to the Arch is the Temple of Olympian Zeus, one of the largest of the era. It was constructed in the 6th century BC but remained unfinished through the ‘Golden Century’ of Athens and was only completed by Hadrian, in 132AD. The Temple once boasted a fine gold-and-ivory statue of Zeus. Only fifteen of the temple’s original 104 columns are still standing, while a sixteenth column lies on the ground, stricken by a storm in the 19th century.

A small worthy detour from the Acropolis in the opposite direction, and through the gardens of the impressive Zappeion Hall, will take you to the Panathenaic Stadium, a replica of an ancient stadium that existed on this site. It was restored to host the first modern Olympic Games, in 1896.

Stop to refuel at one of the many cafes in the in the narrow alleys of Plaka, the old town of Athens. Lysikrates Monument is a famous landmark in the area. From Plaka, the visitor can reach the northern slope of the rock and the spring of Klepsydra, the three cave sanctuaries dedicated to Pan, Zeus, and Apollo, as well as the sanctuary of Aphrodite and Eros.

The archaeological site of the Roman Agora, with its impressive Dorian gate of Athena Archegetis, and Hadrian’s Library lie north of the Acropolis and east of the Ancient Agora. The Roman Agora was the center of city activity during Roman times, while the library housed the state archives and philosophical works and was its spiritual, educational, and cultural center.

Inside the archaeological site are important monuments such as the Water Clock (Horologion) or Tower of the Winds with sculpted depictions of wind-gods, the Vespasianae (public latrines), the Agoranomeion, and the Fethiye Mosque.

The Ancient Agora, a global symbol of Democracy

The Ancient Agora was the heart of the public life of the city – its religious, political, and commercial center. Walking in the surroundings where Athenian Democracy was born and flourished is an awe-inspiring experience and an opportunity to reflect on human achievement, western civilization, and timelessness.

Wander around the greenery and admire marble remains and statues, the striking, well preserved Temple of Hephaistos, a Byzantine Church, and the compact but fascinating Agora Museum. Above  looms the rock of Areopagus, the seat of the first court of law in Europe, with panoramic views of the Agora, the Acropolis, and the city of Athens.

The pine-covered Western Hills (Hill of the Muses or Philopappou Hill, the Pnyx and the Hill of the Nymphs), lies southwest of the Acropolis. On the hill of the Pnyx were held the meetings of the Assembly of ‘Demos’ (Assembly of the Citizens), the most important institution of the Athenian Democracy. The monument of Philopappos stands on top of the hill and if you’re brave enough to climb it you’ll be rewarded with a splendid view of the city – down to the port of Piraeus and the island of Aegina on a clear day. Socrates' Prison is also located on the slopes of the hill.

After a wander around the antiquity marvels of the capital, it’s now time for a lazy descending stroll back to the Ancient Promenade toward Thission, where the serene ancient cemetery of Kerameikos and its small museum are located.

An array of al fresco cafes and restaurants with a direct view of the Acropolis line the walkway around the Thissio metro station – the perfect finish to an inspiring day of world-class sightseeing.